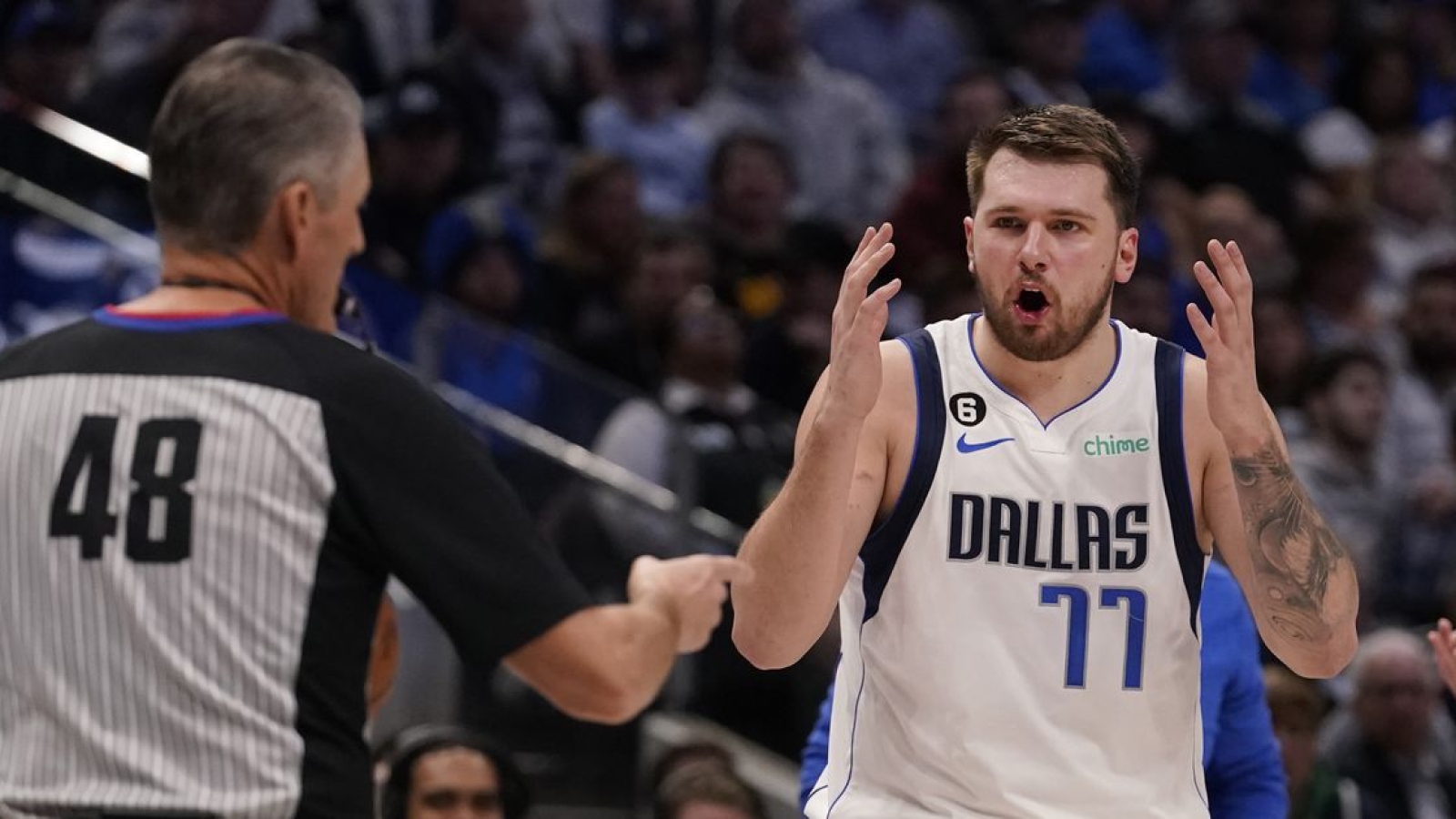 With the Feb. 9 NBA trade deadline approaching, chatter about upgrades for the Dallas Mavericks and other playoff contenders is in full swing.

This week, Mavericks owner Mark Cuban and star Luka Doncic refuted an ESPN report that said Doncic had “strongly indicated” to management a desire for roster upgrades before the deadline.

Still, the Mavericks could seek to improve their roster depth, tweak their salary cap standing and build a stronger core around Doncic before what would be a fourth consecutive playoff run.

Here are 10 players they could target:

Case for: No doubt Bogdanovic is high on many teams’ lists of potential trade-deadline additions to upgrade shooting and defense on the wing, one of the most valuable areas of production in the modern NBA game. After an offseason trade from Utah, Bogdanovic is averaging a career best in scoring and close to his personal highs in shooting and minutes a game, a sign his durability and volume could translate to what would be his third team in the last calendar year.

Case against: Bogdanovic clearly fits what the Mavericks need, especially as a consistent 3-point shooter who could capitalize on the bevvy of open looks Luka Doncic creates while assuming tough defensive assignments. Many in Dallas likely remember Bogdanovic as the reliable Jazz defender who has to pick Doncic up full-court and as the shooter Utah looked to for a potential season-saving bucket in Game 6 of that first-round series.

But the problem is — so does everyone else around the NBA. Whether or not the Pistons move Bogdanovic before the deadline, they will likely field several offers potentially stronger than what the Mavericks could offer in a first-round pick or team-friendly contracts.

Case for: Burks’ veteran savvy and shooting consistency off the bench could upgrade the Mavericks’ rotation this season at a more reasonable price than Bogdanovic, Detroit’s marquee trade chip. Plus, Doncic is familiar with Burks’ game and would likely be in favor. During the Knicks’ 2021 playoff opener, Burks scored 27 points in 26 minutes, prompting Doncic to tweet: “Alec Burks so underrated ! What a game! So nice to watch.”

Case against: Promise this isn’t a list of only Pistons players, but the double Detroit start underscores the current NBA trade landscape: With much parity across the West and close races for play-in tournament potential in each conference, there stands to be more buyers than sellers at this year’s deadline. Many view Detroit as one of the few rebuilding franchises open to retooling their roster in a lost season, and Burks’ skillset is among the most coveted in the league.

Case for: Hachimura is caught in a jam of Wizards forwards, and the Mavericks’ lack of frontcourt depth could give him time and space to develop his shooting consistency and add defensive punch. Since returning from a left ankle sprain and bone bruise on Dec. 22, Hachimura has averaged 14.6 points, 3.6 rebounds and 1.3 assist per game while shooting 49.4% from the floor. The Japan-raised Hachimura recently told reporters he hasn’t asked for a trade, but multiple outlets have reported the Wizards’ interest in moving their 2019 lottery pick.

Case against: Similar to the forward the Mavericks traded to Washington last February (Kristaps Porzingis), Hachimura has endured long absences over his first four NBA seasons. In addition to the 16 consecutive games he missed early this year to an ankle injury, he also sat out Washington’s first 39 games last year because of personal mental health matters and hasn’t played in more than 57 games in any season. If the Mavericks add around Doncic at the trade deadline, consistent support will start with reliable availability.

Case for: With Reggie Bullock slumping this season and injuries to Kleber — still — and Dorian Finney-Smith, the Mavericks’ 3-point shooting production has dipped below the efficiency and consistency that helped fuel their 5-out approach through most of the playoffs last spring. Hield, who’s shooting above 42% on more than nine 3-point attempts per game, is a high-volume shooter who could generate offense — and capitalize on Doncic’s drive-and-pass specialty — in an area that suits Dallas’ current lineup and Doncic’s talent most.

Case against: Follow the NBA over the last calendar year, and Hield’s name has been one of the most frequent in league-wide trade discussions, notably as part of a potential Lakers addition. The Mavericks would likely have to part with at least a first-round pick to pique Indiana’s consideration, and perhaps Dallas will determine their first-round allotment over the coming year is better served for a bigger package.

Case for: This target might sound familiar to Mavericks fans who have followed trade deadline speculation in the last couple years. In the two seasons before this one, Holmes evolved into a reliable frontcourt piece for the Kings while scoring in double figures and averaging at least seven rebounds a game. Now, Holmes has fallen out of Sacramento’s regular rotation, and could be a low-price frontcourt option that wouldn’t eat into much of the Mavericks’ future assets.

Case against: If Holmes’ role has decreased as Sacramento has emerged as a surprise contender for a top-six guaranteed playoff seed, what confidence would the Mavericks have in Holmes’ potential to upgrade their rotation post-trade deadline? Holmes’ annual salary is similar to that of Dwight Powell ($11.1 million this season before unrestricted free agency this offseason), but Powell’s familiarity and chemistry with Doncic and dependability as the Dallas’ longest-tenured player who’s steadied their tumultuous frontcourt outlook this season boost his value beyond money.

Case for: Why would the Mavericks consider adding a new wing whose scoring and assisting rates this season for the Eastern Conference-contending Cavaliers rank below his recent career averages? Because Cleveland has reported interest in pursuing Tim Hardaway Jr., and the contractual math would make LeVert likely the most natural fit in return. If the swap unfolded like that — aside from all other possible inclusions or stipulations — the deal would take Hardaway’s $34 million salary off the Mavericks’ books through 2025, and LeVert’s expiring contract could help with salary cap and luxury tax flexibility.

Case against: The Mavericks’ trade deadline approach will likely be to accentuate and boost Doncic’s dominance with a move that can help them become a stronger contender to emerge from the Western Conference parity in the playoffs. Subtracting Hardaway — who has produced several of the best offensive, defensive and net ratings in two-man lineup combinations with Doncic and other key teammates this year — would run counter to that if LeVert is the main return.

Case for: Call it a full-circle trade if this one materializes. The Hawks selected Reddish at No. 10 overall in the 2019 draft with the pick the Mavericks traded to Atlanta as extra compensation for the the Doncic-Trae Young swap a year earlier. While Reddish hasn’t turned into a reliable standout as might be expected for a top-10 lottery pick, the price to acquire him this season as a bench upgrade with developmental upside likely wouldn’t force Dallas to sacrifice significant future assets and salary space.

Case against: Reddish hasn’t played for the Knicks since Dec. 3, when he missed all four of his shot attempts and committed three turnovers in nine minutes of a blowout loss to the Mavericks. New York coach Tom Thibodeau has since pulled Reddish from the rotation, a sign he doesn’t believe Reddish is productive enough to contribute to their playoff push. As the Mavericks also try to build depth for another postseason run, why would Reddish’s potential and value be any different in Dallas?

Case for: Hello, old friend. Since the Mavericks traded Richardson to the Boston Celtics in August 2021 in one of the first notable moves of GM Nico Harrison’s tenure, Richardson has transitioned to a bench role as an off-ball shooter and defender. He formed a solid connection with Doncic during his 2020-21 pandemic-riddled season in Dallas — the two bonded over their love of soccer — so his familiarity with the Mavericks’ heliocentric superstar could make a midseason acclimation during the stretch run to the playoffs smoother than usual.

Case against: Dallas’ past regime swapped Seth Curry for Richardson in November 2020 with hopes he would provide a reliable backcourt starter to boost the defense. The vision never translated to production, as Richardson shot a career-low 33% from three in 59 games and then lost his starting job in the playoffs. His stops from Boston to San Antonio in recent years haven’t shown strong potential for a different outcome in Dallas this season.

Case for: The Mavericks’ defensive rating this season ranks in the bottom third of the NBA, about four points per 100 possessions higher than their seventh-place finish in coach Jason Kidd’s first season, when energy, effort and accountability on defense became the top priority. Dallas has been rumored to have previous interest in acquiring Thybulle, who earned second-team All-Defense twice in his first three NBA seasons. But his playing time in the 76ers’ rotation this season has fluctuated.

Case against: Despite his defensive prowess, Thybulle’s offense remains a liability, often limiting when and how Philadelphia deploys him in big-time matchups. In the last two seasons, Thybulle hasn’t shot above 32% from three, and he hasn’t displayed consistent offensive production as a creator or driver. While Kidd’s strategy relies on strong defense, he’s conceded that the Mavericks must sometimes outscore opponents with strong shooting to win because their ability and execution on the other end won’t be enough.

Case for: With the Raptors among the few potential sellers at the deadline, Trent’s recent production and potential to hit free agency this summer make him likely the team’s most marketable and moveable player. Trent’s scoring (more than 18 points per game the last two seasons) and tenacious defense (more than 1.5 steals per game in the same span) would provide the Mavericks with two-way force they lack across the roster.

Case against: If the Raptors listen to offers for Trent, no doubt the former Duke product will be among the most in-demand trade targets. Dallas would likely have to attach at least one first-round pick to the deal, but if the front office doesn’t believe Trent has the ability to ascend to co-star No. 2 behind Doncic, the price might be too high to sacrifice future flexibility and roster-building options.