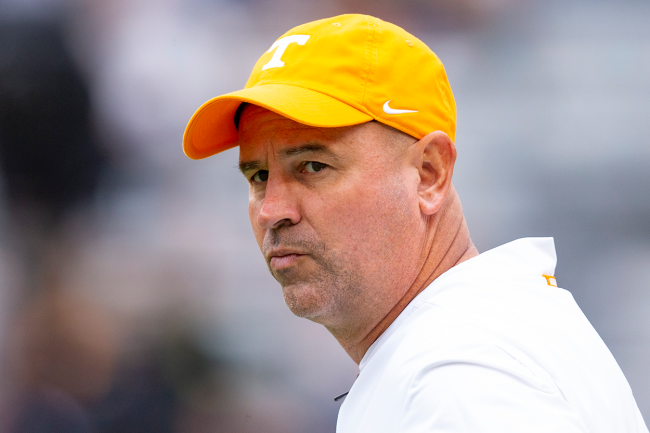 Jeremy Pruitt is currently in the middle of a significant NCAA investigation that stems from his time as the head coach at Tennessee. That does not appear to be stopping him from carrying on as is per usual.

The 48-year-old, who spent last season as a defensive assistant with the Giants, was spotted at a World Series of Poker event in North Carolina on Thursday. He was playing in the $1,100 tournament, according to Ben Mintz.

Pruitt’s appearance at Harrah’s Cherokee Resort on Thursday comes 31 days after the NCAA released its Notice of Allegations against the former coach and the University of Tennessee. It included some pretty significant claims.

In the NOA, the NCAA accused Tennessee of 18 serious violations.

It says that Pruitt and his staff hosted at least six recruits and their families on nine unofficial visits during the year-long dead period that stemmed from COVID-19. They allegedly provided lodging, meals, household goods and furniture that totaled $12,000.

Pruitt’s wife was also involved in the NOA.The NCAA claims that she made cash payments that total at least $13,000. They were allegedly paid out to recruits and their families.

Based on the significance of the allegations and the history of NCAA punishments, the Volunteers and Pruitt could be in very big trouble. It is yet to be seen how things will play out and, as of now, the allegations are exactly that.

No matter what is to come, Pruitt does not seem to be slowing down. Maybe he is trying to win back some of his alleged recruiting payments at the poker table.