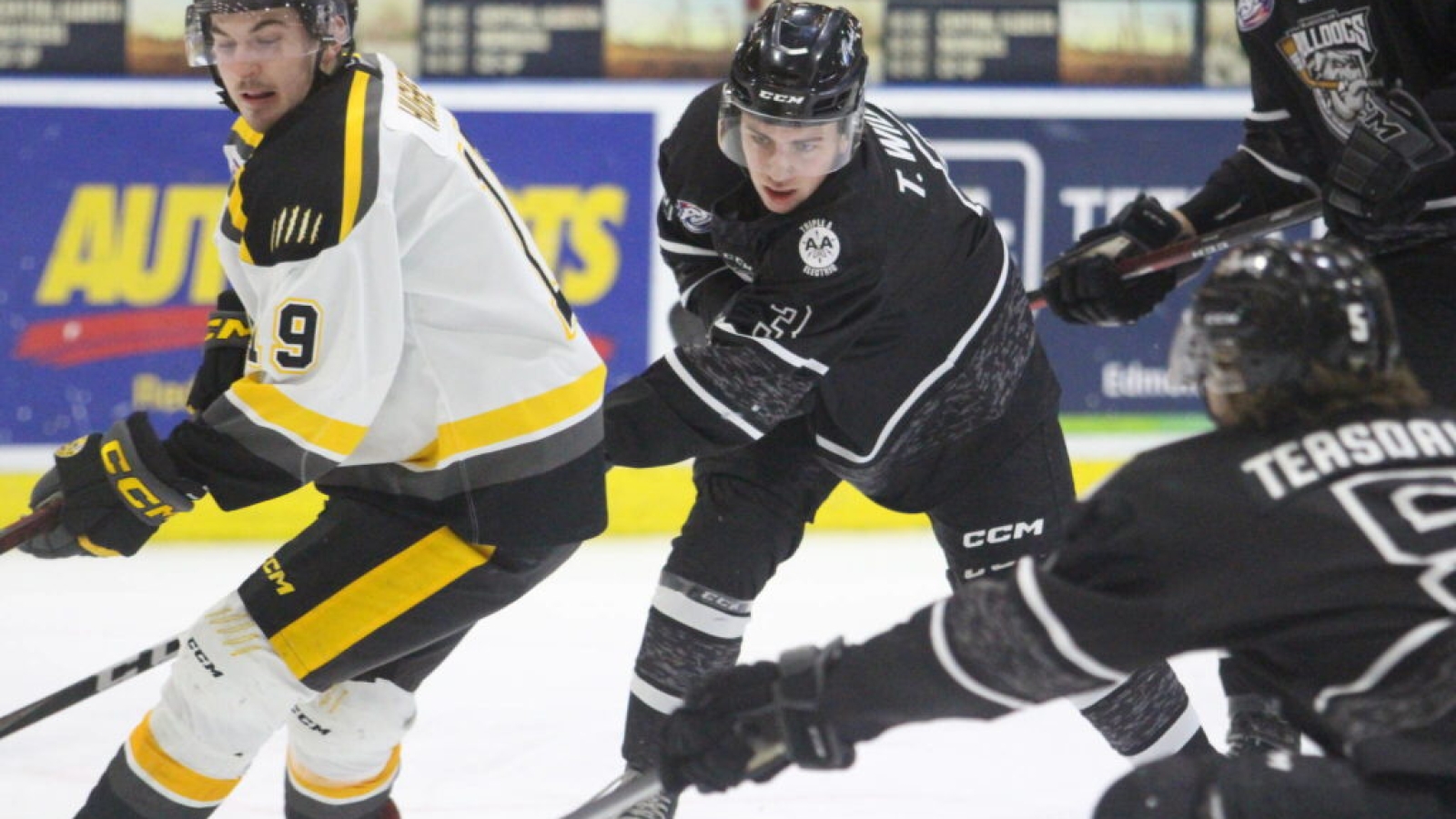 According to a recent study, there may not be a better time to play in the Alberta Junior Hockey League (AJHL) than right now.

In many cases for Junior A players who play in leagues such as the AJHL, the most common next step is to head to the NCAA to play Division I hockey in the U.S.

What College Hockey Inc. has discovered is there have never been this many Albertans playing hockey in the NCAA as there are in the 2022/23 season with 102 players. Of those 102 players, 92 of them played in the AJHL.

Alberta is nearly the top province in Canada and only trail Ontario which has 161 players.

Head coach of the AJHL’s Blackfalds Bulldogs Doug Quinn expects the NCAA teams are beginning to recognize what a good league the AJHL is.

“There’s always a perception that the B.C. had the better league because they had more committed players but the AJHL is improving,” he said. “The AJHL programs are doing more in a lot of exposure with some of the high-end teams in Brooks and Spruce Grove. Blackfalds is looking to create a similar environment.”

He explained for players who are playing in the AJHL committing to the NCAA is the usual school route and is a great way to earn an education.

“It’s an opportunity to be a part of the U.S. college environment and even for the development of your hockey. You play a few years in the AJHL and if you make the NCAA it actually lengthens that opportunity to showcase and keep moving up,” Quinn said.

“Whereas the Western Hockey League probably prepares you better if professional hockey is the only goal you have. The thing is you have such a short window to showcase your skills in major junior hockey so if you don’t perform by the time you’re done junior you’re basically on the downward trend.”

“Going through the AJHL just lengthens that window to continue to move forward.”

The Bulldogs alone have 10 players this season who have committed to play NCAA Division I hockey, half of which were already committed prior to a trade to the Bulldogs. This means in Blackfalds’ second season in the league they’ve helped five players earn a spot in the NCAA this season.

This accomplishment is something the organization is very proud of.

“It’s a huge deal,” he said. “That’s what our program is about is to bring in kids and give them opportunities to develop, grow, and get them to the next level. For our level, the NCAA is the goal so to have so many committed this year it’s been great for the kids and for our program.”

In his rookie season, the 17-year-old has 10 goals and 11 assists in 35 games so far. Last year he played U18 AAA in the Alberta Elite Hockey League for the Sherwood Park Kings notching 15 goals and 13 assists.

Dick said there was no question he wanted the NCAA as the next step in his career.

“You can go pro through it or you can get a degree in what you’re going to study. There’s just lots you can get from it,” he said.

Dick came to the decision to commit to Northern Michigan after they flew him down there to check out the campus and meet the team. It seemed like an awesome place to attend and it all came to fruition after a scout talked to him at the AJHL Showcase earlier this year in Blackfalds.

“They loved my speed, shot, and my work ethic. They wanted me to come to the school to score goals and just create offence,” he said.

Bulldogs defenceman Tanner Willick was the most recent member to commit to American International College (AIC) and will head to school for the 2024/2025 season.

The 19-year-old was traded to the Bulldogs in the offseason from the Drumheller Dragons and has posted three goals and 27 points in 32 games. During his rookie year in Drumheller in 2021/22, he scored nine goals and 28 assists.

“I think in the past two to five years the AJHL has really stepped up… I think colleges are starting to realize that and see that kids in the AJHL can play at the NCAA level,” he said.

The Saskatoon, Sask. native committed to them because it was an ideal fit for him and he liked the situation he’ll be walking into once he makes the transition.

His commitment came after a year of keeping in contact with the school but while he played in the World Junior A Challenge the school offered him a spot and he couldn’t refuse.

It also helped to have a familiar face at AIC, Grayson Dietrich who he played with in Drumheller, that is also attending the school.

“They really opened their arms up to my family and I and I felt it was the best option for me to take,” Willick said.