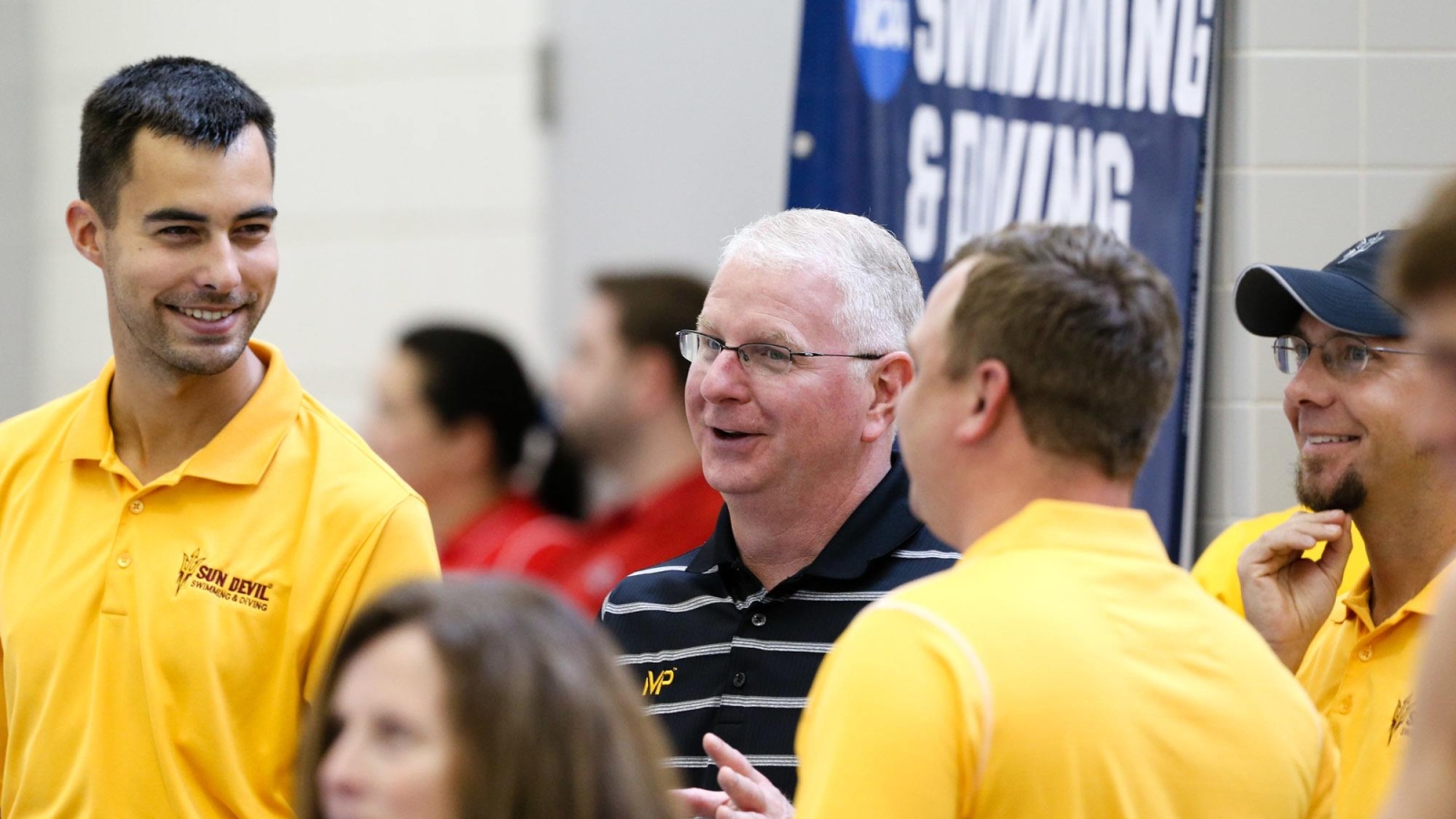 Update 1: added in Texas’ 200 medley/400 free relays manually (they are not in the official results database).

Update 2: We’ve manually re-ranked all of the relays, because the official NCAA relays database is FUBAR. We’re pretty sure the math is right now.

Mid-season has arrived for the NCAA, and with the big invites over, it’s a good chance to take stock of where we’re at in the college season.

That includes scoring out a mythical mid-season NCAA Championship meet based on season-best times.

Normally, this is no problem because of the Swimulator tool, but with USA Swimming still in the process of fixing all of its widgets, that means we had to do it the old fashioned way: with spreadsheets.

Go easy on us.

The Arizona State men are the leaders at the turn midway through the 2022-2023 season. Led by the top time in the country from French sophomore Leon Marchand in three events, the Sun Devils lead the way nationally based on mid-season results.

They sit 11 points ahead of Texas and 35 points ahead of Cal based on scoring season-best times so far. Texas and Cal have combined to win the last 8 NCAA titles. The Sun Devils get another boost mid-season with the addition of the defending European LC Champion in the 200 IM, Hubert Kos of Hungary. Can the Sun Devils surprise and win the NCAA title this year?

Texas, in spite of losing a lot of swimmers to transfers, and missing a few swimmers mid-season as they traveled to the World Championships in Australia, sit in 2nd place in the mid-season projected standings. A lot of points from their distance group (David Johnston, Alex Enyeart) and Carson Foster overcomes big challenges for the Longhorns on relays this season.

The defending NCAA Champions from Cal sit in 3rd place. The Golden Bears returned most of their title-winning roster from last year, and have performed well so far this season, but will need to find more individual points at year’s end if they want to defend their title.

The Golden Bears, like the Sun Devils, are expecting another big boost from Europe in the spring when Hugo Gonzalez returns to complete his NCAA career – he was in Spain in the fall semester, but has committed to coming back for his 5th-and-final season of eligibility. He will look to defend his title in the 400 IM, and is good for 45+ points at NCAAs, widening this gap.

Cal usually swims well mid-season, and has gone into the last two NCAA Championships with psych sheet leads. That resulted in a win last season, but a Texas win the season before.

We weren’t sure where exactly the Florida Gators would be this year after graduating Olympic medalists, Kieran Smith and Bobby Finke. We knew their sprint group would be the best in the country with the addition of freshman Josh Liendo, but their 4th-place standing here shows that they continue to be underrated for their depth and versatility.

The Tennessee men have been the surprise of the fall semester, led by their two young international sprint studs Gui Caribe (freshman) and Jordan Crooks (sophomore). Crooks recently won a World Short Course title in the 50 free, which will give him even more confidence headed toward March.

The Volunteers don’t have enough depth to seriously contend for an NCAA title this year, but a top 5 finish for them would be a coup. They’ll have to break the trend of underperforming at NCAAs to hang on to this position – hopefully, a number of midseason qualifications for NCAAs allow them to line up more directly for the national championship meet this year.

There were some other things that jumped out here. Texas A&M as high as 7th is ahead-of-schedule for a team with some very good young talent. The Alabama men at 12th, higher than they finished at NCAAs last year, is also a coup. They are boosted by a nation-leading 1:31.89 in the 200 free from Charlie Hawke from the Art Adamson Invitational.

Last year, he only swam a relay leg for Alabama at NCAAs, and this year he’s in pole position heading into the second lap of the season. That’s a huge billboard for second-year head coach Margo Geer’s ability to develop talent.

The Auburn men back up to 8th place already might be the biggest surprise of all. They were just 29th at last year’s NCAA Championships.

Overall it was a great semester for the SEC, where almost every team has some version of forward momentum. SEC men have the top times in 8 of 13 individual events, including all five freestyle races.

The Queens men, who are not actually eligible for the NCAA Championships, made the list too. Queens has to sit out of NCAA competition for four years while transitioning from D2 athletics to D1 athletics.

While they aren’t eligible for the official meet, they are eligible for our Mid-season Mythological Championships.