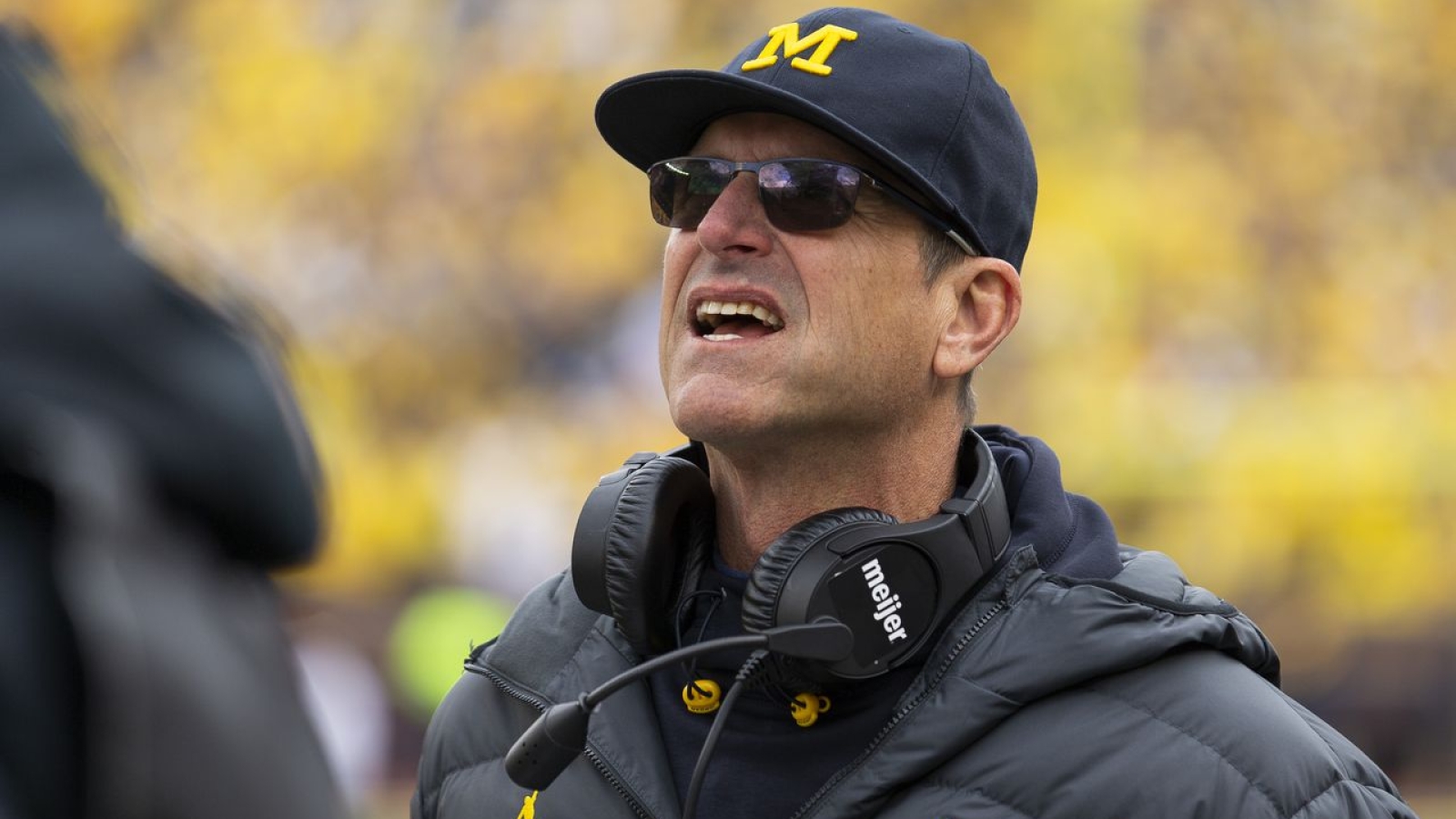 ANN ARBOR — Michigan football has received a notice of allegations from the NCAA for alleged recruiting violations that occurred within Jim Harbaugh’s program.

The allegations, according to multiple reports, consist of four Level II violations for impermissible contact during the COVID-19 recruiting dead period, using too many coaches during practice and watching video of offseason workouts. While the NCAA categorizes Level II violations as “significant breach of conduct,” they are relatively common throughout the country and usually only result in minor penalties.

But Michigan isn’t just facing potential Level II charges. There’s a Level I violation against Harbaugh, who allegedly failed to cooperate with investigators related to a Level II violation.

The NCAA describes a Level I violation as a “severe breach of conduct” that “seriously undermine or threaten the integrity of the NCAA collegiate model.” Level I infractions can result in substantial penalties, both for the program and individuals involved.

MORE: What a Level I violation could mean for Jim Harbaugh, Michigan

Every case is different, but here are some recent examples of other programs who committed Level I violations. It is important to note that in some instances, allegations of violations can be reduced. For instance, Memphis’ men’s basketball team was initially charged with at least four Level I violations, but following an investigation, the NCAA’s Independent Accountability Resolution Process determined Memphis was only guilty of Level II and Level III violations, helping the program and head coach Penny Hardaway elude a postseason ban and a suspension of any length.

Details: The investigation is still ongoing but the NCAA has charged the program with 18 Level I violations for alleged prohibited recruiting benefits under former head coach Jeremy Pruitt, who was fired for cause in January 2021 after Tennessee’s internal investigation into the allegations.

The allegations are substantial and include him being accused of providing about $9,000 to the mothers of two recruits. His wife, Casey, meanwhile, is accused of making 25 cash payments totaling about $12,500 to help a prospect’s mother make her car payment.

The school also did not self-impose a bowl ban in 2021 because it didn’t want to penalize current coaches, staff members or players in the program who had nothing to do with the allegations.

However, in the NCAA’s report, it said that as many as 12 Tennessee athletes who received impermissible benefits had competed in more than 60 games, making them “ineligible,” according to the NCAA.

The NCAA also accused Pruitt and his staff of hosting six recruits and their families during a yearlong COVID-19 dead period.

One notable component of the investigation is that the NCAA did not charge the university with lack of institutional control because of its cooperation with investigators, which could help the program avoid crippling levels of punishment.

Details: In October 2020, the NCAA sent a notice of allegations to Arizona, which was accused of nine counts of misconduct, including five Level I violations.

Ex-assistant Emanuel “Book” Richardson was given a 10-year show-cause penalty for accepting $60,000 in bribes and lack of cooperation in the case. Richardson served three months in federal prison in 2019 after being charged with conspiracy to commit bribery in September 2017. He has not coached college basketball since 2017.

Mark Phelps, another former assistant, received a two-year show-cause penalty after arranging fraudulent transcripts for two former Arizona recruits. Because the NCAA found that Phelps misled investigators, it aggravated charges from Level II to Level I.

Former head coach Sean Miller, who was originally assessed a Level I coach-control charge, did not face punishment following the IARP investigation. However, he was fired in April 2021 before being hired as Xavier’s head coach in March 2022.

For the program, its self-imposed penalties helped it avoid harsher punishment from the NCAA.

Arizona has already completed a one-year postseason ban in 2021, a two-week ban on campus visits in March 2022, a ten percent reduction in official visits and a 15-day reduction in recruiting for the 2021-22 academic year.

Details: Kansas was one of the several men’s basketball programs accused of using Adidas to gain an illegal advantage in recruiting in 2017. The university has been awaiting a final decision from the NCAA’s IARP since then but decided to self-impose penalties this year, which included suspending head coach Bill Self and assistant Kurtis Townsend for the first four games of this season.

The program was accused of five Level I violations stemming from a 2017 FBI investigation into college basketball corruption.

It is important to note that some of the alleged infractions would no longer be against the rules because of name, image and likeness (NIL) legislation, which has allowed student-athletes to make money from endorsements, signings and other business opportunities.

Details: In March 2022, LSU received a notice of allegations involving both sports, including eight Level I violations. Seven are tied to the basketball program, with five centered around misconduct from former head coach Will Wade.

According to documents obtained by ESPN in August 2020, the NCAA’s enforcement staff received information that Wade “arranged for, offered and/or provided impermissible payments, including cash payments, to at least 11 men’s basketball prospective student-athletes, their family members, individuals associated with the prospects and/or nonscholastic coaches in exchange for the prospects’ enrollment at LSU.”

Wade was fired in March after LSU received the notice of allegations from the NCAA. The school also fired assistant coach Bill Armstrong, who was accused of one Level I violation.

Meanwhile, the football program was accused of three violations, including a Level I charge that involved a booster embezzling more than $500,000 from a hospital foundation and giving some of the stolen money to the parents of two former LSU football players.

In September, the LSU football program was placed on one year of probation in September and issued a three-year show cause against former offensive line coach James Cregg, but those penalties stem from different recruiting violations case.

The other cases involving the Level I violations have not yet been resolved.

Details: After about a five-year investigation, NCAA’s Committee on Infractions levied some serious penalties on the program in December 2017. Of the infractions Ole Miss faced, 15 were categorized as Level I. The case, which was appealed by the school, involved alleged academic, booster and recruiting misconduct under two head coaches – Houston Nutt and Hugh Freeze – although but most of the investigation was centered around Freeze’s tenure.

The NCAA determined that the school lacked institutional control and fostered “an unconstrained culture of booster involvement in football recruiting.”

The punishment included a two-year bowl ban, three years of probation, scholarship reductions and financial penalties. The program also had to vacate 33 wins over six seasons, including 27 of Freeze’s. Multiple coaches also received show-cause penalties, including Freeze. He also was suspended for two games during the 2018 season if any other NCAA school hired him as head coach, but he didn’t accept the Liberty job until after the 2018 season.

According to the NCAA, Klein was accused of providing players with impermissible benefits — including paying for manicures, loaning money for rental cars, and purchasing textbooks for an athlete not on scholarship.

The majority of violations involved Nazlymov, who “arranged, provided or directed other coaches to provide more than $6,000 in recruiting inducements to three prospects,” primarily as free access to OSU’s practice facility, per the NCAA. Two prospects also received free meals, private lessons from the coach and other “inducements.”

The women’s golf program also received penalties for violations, but none of them carried Level I distinction. All three programs were placed on four years of probation and self-imposed a 2020-21 postseason ban.

Most of the punishment stemming from the investigation were self-imposed, which included a handful of recruiting restrictions.