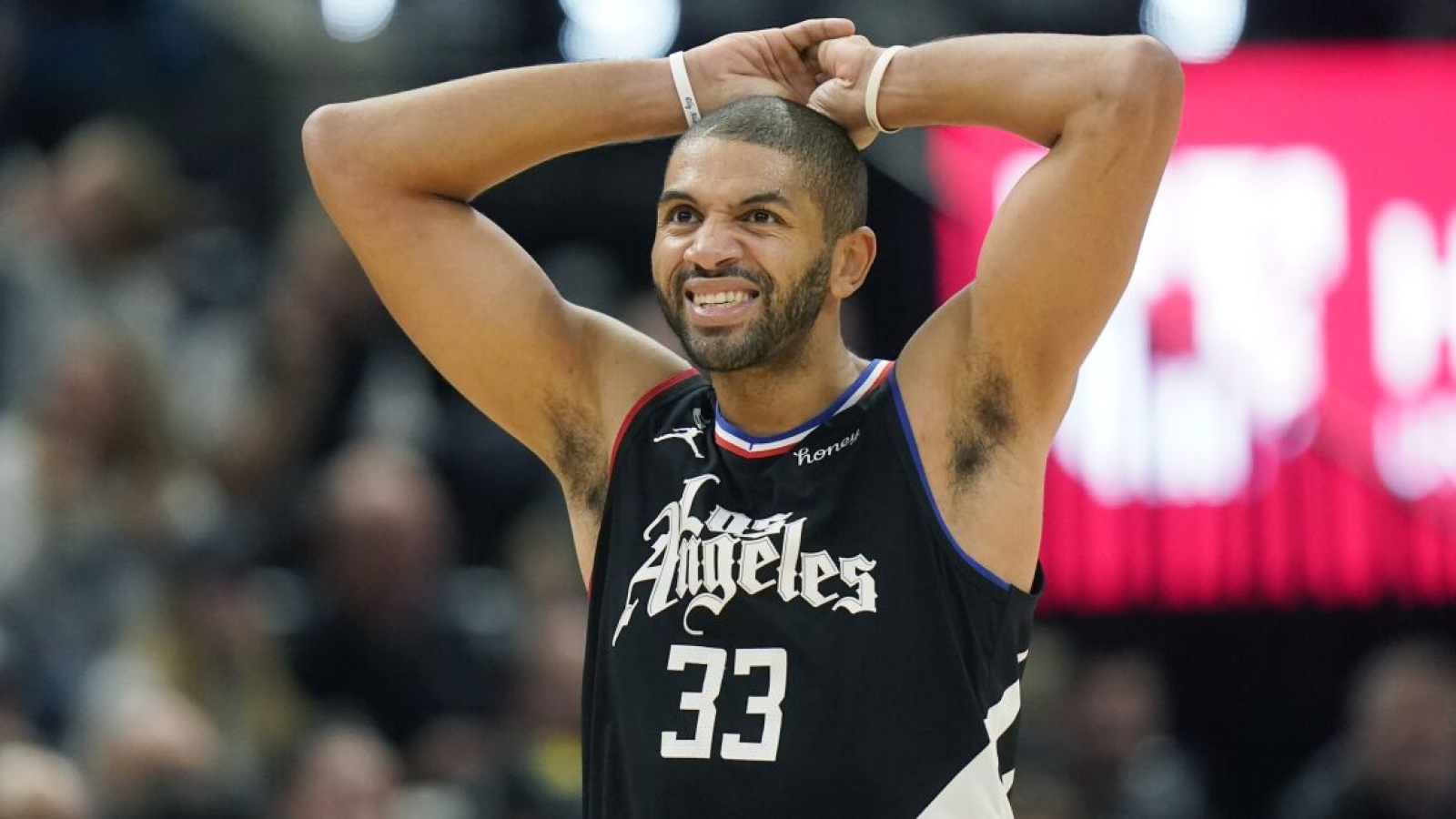 Clippers teammates were gathering in the key and coaches were talking in a circle at midcourt, but Nicolas Batum was in no hurry to leave his courtside chair and begin shootaround on a late November morning.

Only weeks from his 34th birthday, the wing turned his eyes toward the empty upper deck of Portland’s Moda Center and his memories of the younger version of himself that spent his first seven seasons with the Trail Blazers.

Growing up in the NBA requires absorbing often painful lessons. Growing old in the league, however, is reserved for the few who can put what they’ve learned into action. Batum, with 1,006 games on his resume including the regular season and playoffs, counts as a survivor, a longevity he traces to the first, and perhaps the most enduring, career lesson he took in weeks before his first official game.

It was the summer of 2008, not long after an NBA introduction at Summer League so dismal that the 19-year-old rookie quietly began telling himself, before arriving in Portland for offseason workouts, just to get through his first contract.

“He really told me, ‘You think you’re hungry, you want it bad, but don’t worry, there’s another Nic Batum coming next year — and then the next year, because there’s a draft every year,’” Batum recalled with a smile from his courtside chair. “Getting drafted is tough. Playing in the NBA is hard. Staying in the NBA is really hard. And I’ll never forget that.”

It’s why he has also never forgotten how it felt to be on the verge of prematurely losing his place in the league, in the fall of 2020, wondering whether he had been finally replaced by the next wave of long-armed, multi-positional wings. Once one of the Hornets’ centerpieces under coach Steve Clifford, Batum had been consigned to the bench as Charlotte underwent a youth movement under new coach James Borrego, and after a career-worst season, he was waived to make room for the signing of Gordon Hayward.

“Two years ago, I didn’t think I would be in that spot today still playing major minutes, have a role for a contending team, no,” Batum said. “I was more about retirement.”

Facing the same Hornets on Wednesday, Batum made seven of his 10 three-pointers, figured heavily in the Clippers’ closing lineups alongside Paul George and Kawhi Leonard and offered fresh reminders why his career renaissance continues 15 seasons in.

Some of that is health — Batum is the only Clipper to have appeared in every game this season. But he also continues to earn minutes over younger wings because of his accumulated knowledge, the oldest Clipper also the wisest.

Batum’s value, said coach Tyronn Lue lies in the fact that the player raised in a little town near Normandy, France, guards bruising centers such as Joel Embiid some nights, trying to tire them out before they can set their feet in the paint. Some nights he hounds guards such as Jamal Murray when they collect the inbounds pass, trying to disrupt their flow 94 feet from the rim. Sometimes Batum fills the need of a corner three-point sniper, others a rebounding forward.

In other words, every day he fills the role of Clippers’ fulcrum, the steady man in the middle balancing a roster that can teeter between championship contender and injured inconsistency.

Clifford, an NBA coach for more than two decades, called Batum one of his “favorites.”

“It’s basketball IQ,” said Clifford, who coached Batum during career seasons in points during his first stint in Charlotte. “Both ends of the floor decision-making, knowing where the ball should go before you catch it. That used to be a lot of guys. There’s very few players like that now.”

Before practices, he follows the same, strict choreographed shooting routine. He takes care of his body. He was in no hurry to begin shootaround in Portland last month because he had already been on the court for a half hour, shooting, before his teammates arrived.

“After what happened to me in Charlotte I promised myself, especially with the French national team, I’m like … ‘I’m going to do everything so I will retire the way I want,’” said Batum, who has played in three Olympics for France, earning a silver medal in 2021, and for obvious reasons hopes to play in 2024 during the Paris Games. “That’s the attitude I have now. Going to keep working and I mean, they’re going to have to kick me out. Good luck with that.”

After Batum averaged 40% three-point shooting and 26 minutes during his first two seasons with the Clippers, Batum opted out of a player option last July and became an unrestricted free agent. When his agent called last summer on the eve of free agency, he told Batum about a dozen teams hoped to make their pitch — and that was only the playoff teams.

But at about the same time, Batum’s 6-year-old son asked whether he would have to change schools, and Batum empathized with the reluctance to leave a place he’d come to love. Batum has a deep appreciation for and trust in Lue, whom he credits with resuscitating his career. And so he never considered leaving, his re-signing to a two-year, $22 million deal a fait accompli.

And so he never considered leaving, his free-agency thought process beginning and ending with one, sarcastic question: Well, is Ty Lue coming with me somewhere else? Of course not. Then why would I ever leave?

“He’s been valuable every year he’s been here,” Lue said.

Experience has taught him not to take for granted the good times. During his first six seasons in Portland, Batum grew into a core piece because, in the recollection of Williams, now the Phoenix Suns’ coach, Batum developed the survival instincts that have kept him in the league.

“Sometimes if you tell a guy ‘Do this, this and this’ they become robotic,” Williams said. “He didn’t do that. He kept the ‘dog’ and kept growing as a player.

“And he had this drive about him that I didn’t know until I saw him play against guys he had grown up with, especially Pau Gasol. He wanted to dunk on Pau every chance he got and I was just like, ‘What is up with that?’ It was a national team thing and that’s how I kind of learned he had a streak.”

Williams laughed while saying something else he learned: Usually quiet and genteel, Batum would curse out coaches by wagging his finger and clucking his tongue. And it was with frustration that he left Portland after seven seasons.

Wanting a mental break during the 2014 offseason, Batum didn’t want to play for France in the summer’s World Cup. He showed up, anyway, and left with all-tournament honors — and burnout.

Less than a year later Batum was traded to Charlotte, a trade he learned of while on his couch in Paris, after he shot then career-lows of 32% on three-pointers and 48% inside the arc and didn’t improve in the postseason.

“I understand why I got traded, and I should have done more, maybe,” he said. It is one part of what he called the only “what-if?” moment of his career — could Portland, with its roster built around LaMarcus Aldridge’s post fadeaways and Damian Lillard’s perimeter magic and strong supporting cast, have made a championship push in 2016 and beyond had the roster stayed healthy and not broken up by free agency and trades?

Batum doesn’t want what-ifs to cloud his remaining NBA years. Wanting a break ahead of what he presumed could be a lengthy 15th season, he skipped playing internationally with France last summer. When Lue met with him in Paris in August to tell him his role would change because of a wing-heavy roster, Batum shrugged and told the coach to simply tell him what to do. And when the Clippers stumbled out of the gate it was Batum — as he endured his own rocky start shooting — who preached patience over panic, saying it would take perhaps two months to find rhythm.

Last June, after Batum dropped in to watch young prospects work out ahead of the draft in front of Clippers’ executives, one of them, a long-armed French forward named Moussa Diabate, turned to Batum, exhausted, having just completed his 20th draft workout. The Clippers later drafted Diabate, and Batum has doled out lessons during their first months together. But on that day, in that first meeting, Batum knew just what to say.

“He was like, ‘If you think that’s hard, imagine the NBA, when you actually have to stick now,’” Diabate said.