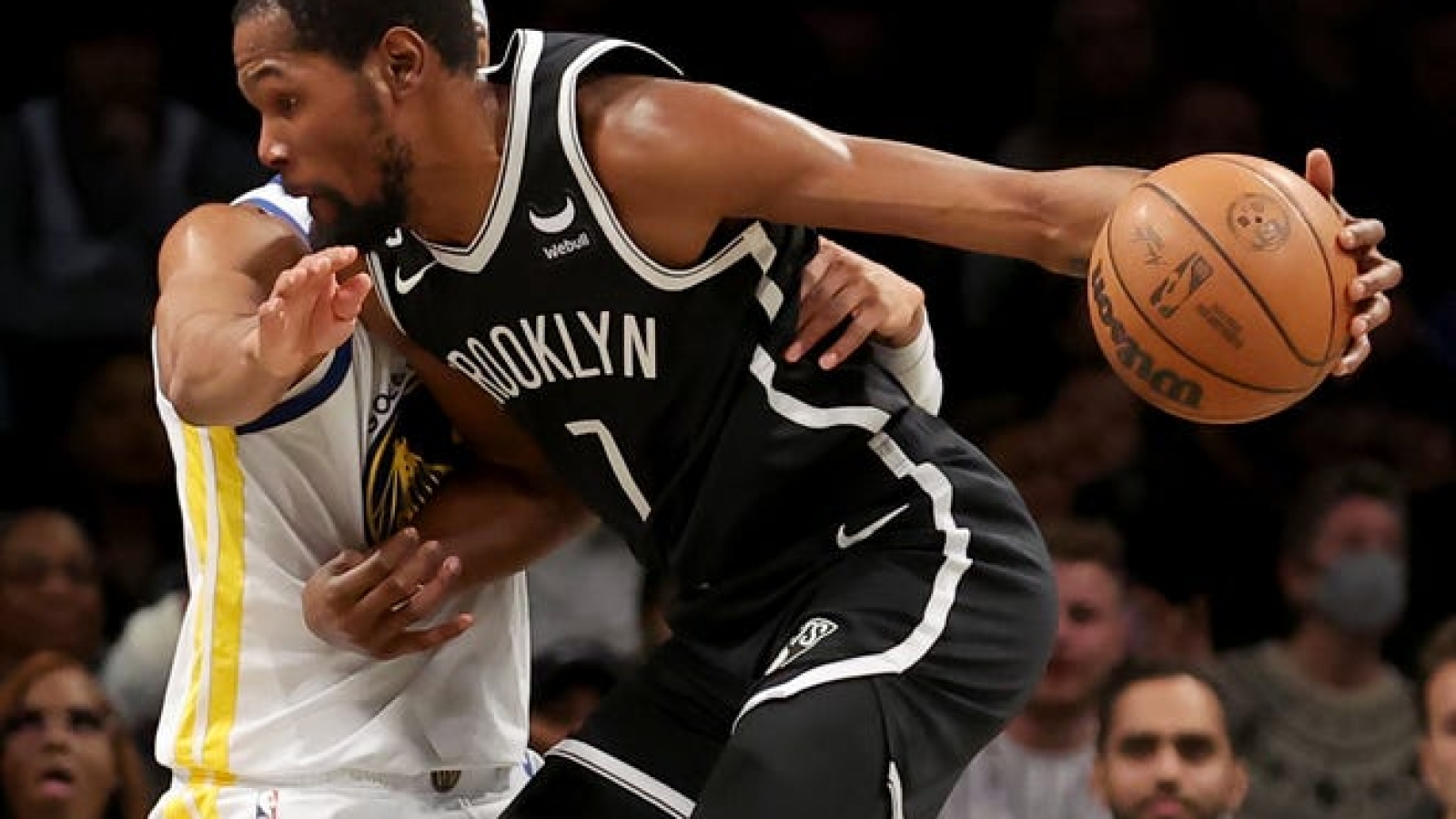 NEW YORK (AP) — Jacque Vaughn wasn’t aware his Brooklyn Nets had the best first half in their history.

One of the best in NBA history, actually.

Kevin Durant scored 23 points, all but two in a 91-point first half that was the third-biggest in the league, and the Nets routed the Golden State Warriors, 143-113, on Wednesday to send the reigning champions staggering home with their second blowout loss in two nights in New York.

“That’s what happens when you come to work and you’re ready to work from the beginning,” Vaughn said.

With Stephen Curry, Klay Thompson and Andrew Wiggins all sidelined, the Warriors finished 1-5 on their trip to the East and will hope to get healthy before they have to get back on the court on Christmas against Memphis.

Curry will remain sidelined by a shoulder injury, but Wiggins could be back, and the Warriors will take all the help they can get after trailing by 44 in this one.

“It’s the Warriors,” Durant said. “You always respect them no matter who’s on the floor. They have a championship system and championship players.”

The Nets matched a franchise record with nine players in double figures and won their seventh straight, even with Kyrie Irving out with right calf tightness.

James Wiseman scored a career-high 30 points on 12-for-14 shooting for the Warriors, who lost by 38 points to the Knicks on Tuesday night.

The Nets had to come from 18 and then 19 points down in their last two victories, but this one was over not long after the Warriors’ bus finally arrived after some New York holiday traffic.

The Nets made 11 of their first 12 shots and by the time the first quarter was over it was 46-17, a 29-point differential that was the largest in any period in the NBA this season.

Coach Steve Kerr said the Warriors’ early turnovers — they finished with 21 that led to 36 points — helped the Nets get going.

“And then they made everything,” Kerr said. “They were phenomenal in the first half.”

It was 68-31 when Durant was whistled for a technical foul for his sideline celebration after Ben Simmons slammed down a long lob pass. The Warriors scored the next seven in one of their only highlights of the night before Brooklyn extended it to 91-51 at the half on Durant’s 3-pointer.

Simmons got the first two baskets of the third for the largest lead at 95-51, but Durant was 1 for 8 playing all 12 minutes as the Nets managed only 18 points in the period.

Kerr hopes to have Durant on his side again on the 2024 U.S. Olympic team. Durant is the leading scorer in U.S. men’s history and Kerr said USA Basketball leadership hopes he will play in Paris, where he could become the first man to win four basketball gold medals.

“That would be nice,” said Kerr, who joked he would “most likely pull him aside tonight” to make a recruiting pitch. “I mean, he’s been so dominant with Team USA and like I said, he’s a guy who just, he loves to play. So we’re hoping he decides to keep going.”

Durant said it was too early to make his decision.

Warriors: Golden State starts an eight-game homestand Sunday. … Wiggins has missed the last eight games with a right groin strain. … Kerr had no update on the status of Donte DiVincenzo (illness unrelated to COVID-19) or JaMychal Green (health and safety protocols).