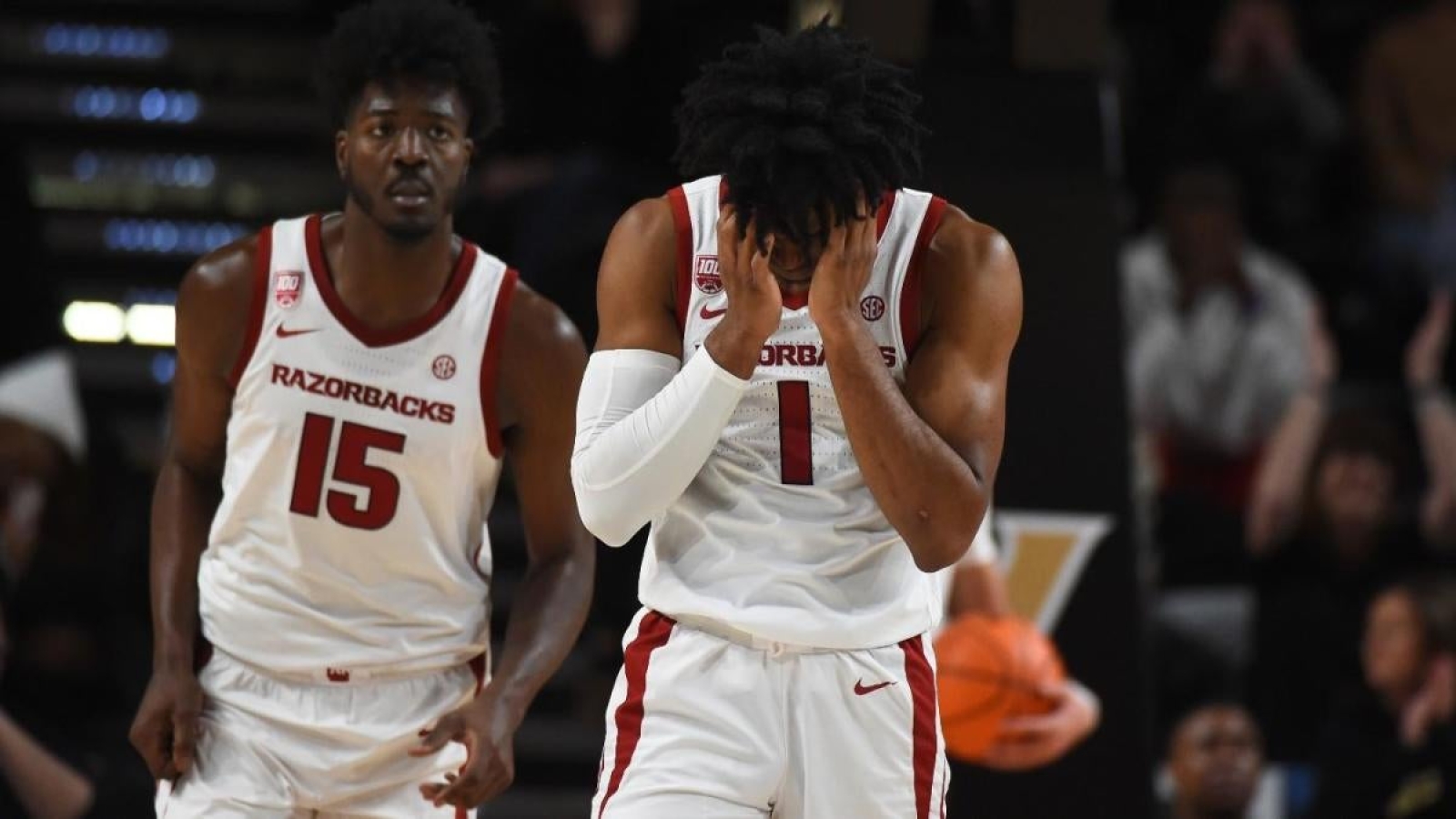 On Friday’s episode of Eye on College Basketball I pointed out that, despite Arkansas‘ reputation, if you really dug into the reality of the 15th-ranked Razorbacks, it was conceivable they could wind up messing around missing the NCAA Tournament.

I put the prospect of Arkansas’ ill-desired plot twist at 15% — but that was before the Hogs got stamped 97-84 at Vanderbilt on Saturday.

Now? I’d double the chances the Razorbacks are left out of the Big Dance.

Credit to Jerry Stackhouse’s Commodores for putting up one of the most impressive second halves of the season: 69.2% shooting, including 66.7% from 3-point range and 63 second-half points to Arkansas’ 42 — turning an eight-point deficit midway through the game into a 13-point win. Vandy averaged a lava-hot 1.4 points per possession, by far the best showing against Arkansas’ (previously stout) defense this season. Vanderbilt’s dismissal of the Hogs was so statistically impressive, it dropped Eric Musselman’s team from 14th to 22nd in overall defensive efficiency at KenPom.com.

I still think it’s comfortably more likely than not that Arkansas sees its name pop up on CBS on Selection Sunday when the big bracket is revealed, but this program is in trouble and needs to find a way to safety soon. After an 11-1 start, Arkansas has lost four of its last five, and at 1-4 in the SEC, is only ahead of Mississippi in the league ledger.

Nobody thought this was possible three weeks ago, let alone in the preseason.

There’s a lot to be worried about. First, because the offense is hamstrung due to injuries, Arkansas has to win with its defensive intensity and aptitude. If that goes, this team is 100% toast. I don’t anticipate many more teams dropping better than 1.2 points per possession on the Hogs moving forward, so there’s that, at least.

And what about that offense? As Musselman told me recently, the staff built its O around two guys who aren’t playing: Nick Smith Jr. and Trevon Brazile. The latter is done for the season with a torn ACL. The former is working on a knee injury, with the hope he’ll be able to come back by February. Skepticism abounds over whether the projected top-10 NBA Draft pick will play again for the Hogs. I think he will. I also think he needs to in order to ensure an NCAA Tournament bid for Arkansas. Since Dec. 27, according to BartTorvik.com, Arkansas has played like the 120th-best team in the sport.

Problem is, Arkansas can’t shoot from deep. It ranks 336th nationally in 3-point accuracy (29.1%) and doesn’t even take that many triples — just 27.6% of its shot attempts are from beyond the arc. Having long-distance threats is almost mandatory for being a Final Four-caliber team these days. Arkansas? No one in the rotation is shooting better than Anthony Black‘s pedestrian 32%.

Next up for the Hogs is a tilt at 13-4 Missouri on Wednesday against a Tigers team that might be just as flawed and anguished as Arkansas after losing three of its past four, including to Florida on Saturday. No. 20 (soon unranked) Mizzou will get the benefit of waking up in its hometown before facing the Razorbacks on Wednesday. Arkansas will need to prove it can do something it hasn’t done yet: win on the road.

At 12-5, the Razorbacks only have two quality wins: San Diego State and Oklahoma on neutral courts. Road games against Baylor, Kentucky, No. 4 Alabama and No. 5 Tennessee still await. Can this team win even two of those games without Smith on the floor? I doubt it.

The silver lining for Arkansas fans, and they know it, is how Musselman’s overcome mid-season hiccups the past two seasons and rallied those campaigns to Elite Eight runs, the school’s first since the mid-90s. In 2020-21, Arkansas was a 13-5 team at the end of January and projected near the bubble. It lost one game between then and the NCAA Tournament. Last season, Arkansas played a weak nonconference schedule, got turned sideways early in league play and found itself at 10-5 and with an 0-3 SEC record in early January.

The Razorbacks won 13 of their next 14 and earned a No. 4 seed en route to a regional final.

Musselman’s one of the best coaches in college basketball — it’s why his name is being floated for the vacant Texas job, yet another subplot to the unease currently with Arkansas’ situation — so I won’t be surprised if this team finds a way to right itself. But to this point, there’s not a lot of evidence to suggest it will.

The Razorbacks were considered SEC contenders just two weeks ago. That speculation is over; Arkansas will not be winning this conference. Instead, circumstances now dictate we wait and see on this team. Can Arkansas fix itself and minimally do what’s been expected for the past nine months in Fayetteville? Specifically, simply: make a third straight NCAA Tournament under the same coach for the first time in more than 20 years—since Nolan Richardson.