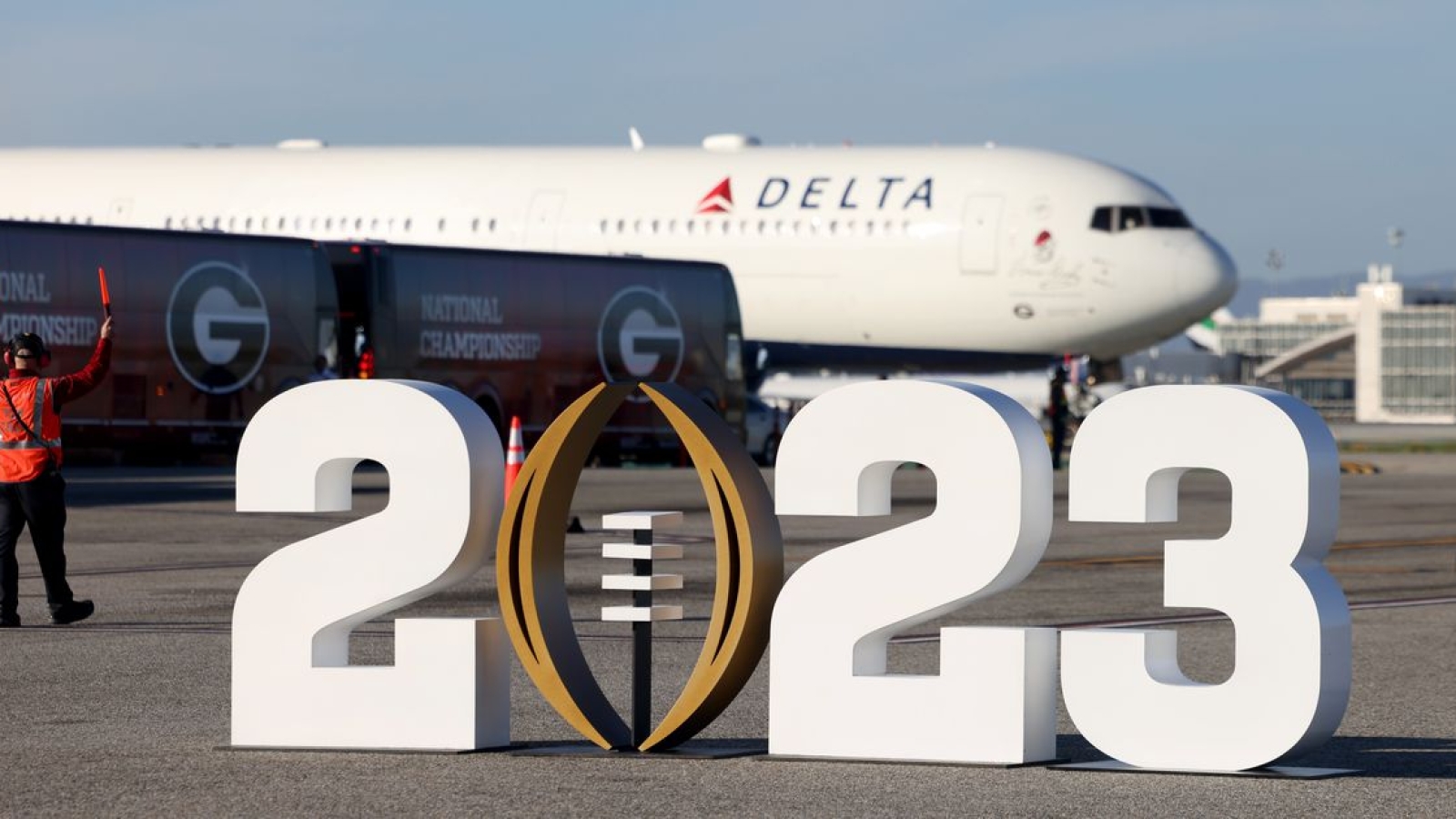 Indianapolis was frigid but compact. There’s a reason it hosts the NFL combine every year (and the proposition of moving it was met with such blowback). It’s an ideal city for conventions and events. Everything is within blocks. It never feels too busy.

Essentially, it’s the opposite of Los Angeles, where the weather is better (mid-60s) but walking isn’t an option. Atlanta folks can appreciate the traffic problems. Even leaving LAX was a chore for many on Thursday with so many cars backed up. An issue for several Thursday arrivals: Some coming from Atlanta had to wait hours to retrieve their delayed luggage due to inclement weather prompting Delta to swap bags for extra fuel in the event it was needed before being cleared to land.

But the weather was beautiful Friday in Southern California, reminding why it can be worth the hassle. Quite different from Indiana last January, when fans decked themselves in layers in freezing temperatures and tailgated outside Lucas Oil Stadium. But SoFi Stadium made it clear early: no tailgating, a sin to southerners. That, alone, erases an important component of the gameday experience. It’s especially unfortunate for TCU fans who might not get this opportunity regularly.

This is a huge deal for the TCU fanatics, who overtook the Phoenix area just over a week ago and were rewarded with an exciting Fiesta Bowl win over Michigan in one semfinal game. They didn’t expect to be here. They weren’t supposed to be here. And their school could establish itself the best underdog story in college football history with another upset.

Georgia fans are enthusiastic too, probably more so given the expectation of a repeat championship. They started shrouding Los Angeles in red and black late this week. The last time Georgia played here was the 2018 Rose Bowl, an unforgettable comeback over Oklahoma that put the Bulldogs in the national championship (back when they weren’t expected to be there and when Stetson Bennett was a scout-team quarterback). That was in Pasadena, two years before SoFi Stadium opened.

There is one snug spot for Georgia fans in this megapolis: The JW Marriott at L.A. Live, a high-energy area surrounding Crypto.com Arena, home of the NBA’s Lakers and Clippers and the NHL’s Kings. It’s far from a true taste of Los Angeles, but it’s easy for visitors. There are restaurants aplenty and much of downtown is walkable (Grand Central Market sits a mile away). It’s a 20-or-so-minute drive to Hollywood for those seeking touristy activities.

The L.A. Live area is the only section outside Inglewood decorated with national championship paraphernalia. Like parts of Inglewood, the light poles down Figueroa Street featured flags advertising Georgia, TCU and the game itself. The convention center, where coach and player interviews were to take place Saturday, had the “Fan Central” experience that’s held annually in every championship city.

The adjacent JW Marriott displayed heaps of championship signage. The event’s logo covered the outer front window and was displayed throughout the hotel. The lobby also had a pop-up shop that sold merchandise.

This is the Georgia team hotel. The team is staying there, and fans being fans, figured that out ahead of time despite the Bulldogs opting not to make it public knowledge. A few hours after coach Kirby Smart briefly addressed reporters at LAX, the team headed to the hotel. Fans gathered in the lobby.

Among them, Angela Delay, a 1982 UGA graduate of the pharmacy school and current Millen resident. She was attending her second consecutive national championship with friends. “We just feel like we had to make the trip,” she said. “Living in Georgia, this is about as far as you can come. We went to Indiana last year and had great results. We’re expecting good things this year – and next year.”

Delay praised the atmosphere around L.A. Live. It was her first trip to California, and she’s taken in the sights. But the priority is her Bulldogs, whom she expects to win Monday. She and her friends later walked across the street to see the Hawks play the Lakers.

Yes, it just-so happened another Georgia team was in town, so that was a bonus experience for those who partook. “Things are just falling into place,” Delay said.

Also among those hanging in the lobby: Dr. Mahfouz El Shahawy, traveling from Sarasota, Florida. His son, Dr. Magdi El Shahawy, is Georgia’s deputy athletic director for academics and student development. He had his own collegiate football career at Florida State (1986-89). His father came to California to support him and the program.

“They have a very good team,” Dr. Mahfouz said. “They’ve always been good, but now they’re finally on the (multiple championships) track.”

A modest crowd continued awaiting the team buses. At one point, an inebriated fan yelled “38-20,” offering his prediction aloud – Georgia wins, of course – while warning that the Bulldogs need to keep TCU quarterback Max Duggan contained in the pocket. Other fans dined in the lobby, most of whom donned UGA gear, including player jersies, and other merchandise from recent bowl victories.

Those focused on catching a glimpse of their favorite players though were left unfulfilled: Around 6:45 p.m., the Bulldogs arrived but entered quietly through a side door. They reported to their assigned floors – offense and special teams, and defense – without fan interference. A highlight: One player jokingly serenaded his teammates with his truncated rendition of “Georgia on My Mind.”

Georgia has been the only thing on so many minds in Southern California. The decorations and fanfare, even the traffic, are ultimately irrelevant. Fans flew across the country intending to see a win.

There’s a Crypto.com advertisement exhibited on the exterior of Georgia’s team hotel. It’s a large image of Lakers star LeBron James that reads, “Play the game. Then change it forever.” The Bulldogs are days away from doing just that as the first back-to-back champion of the College Football Playoff era.