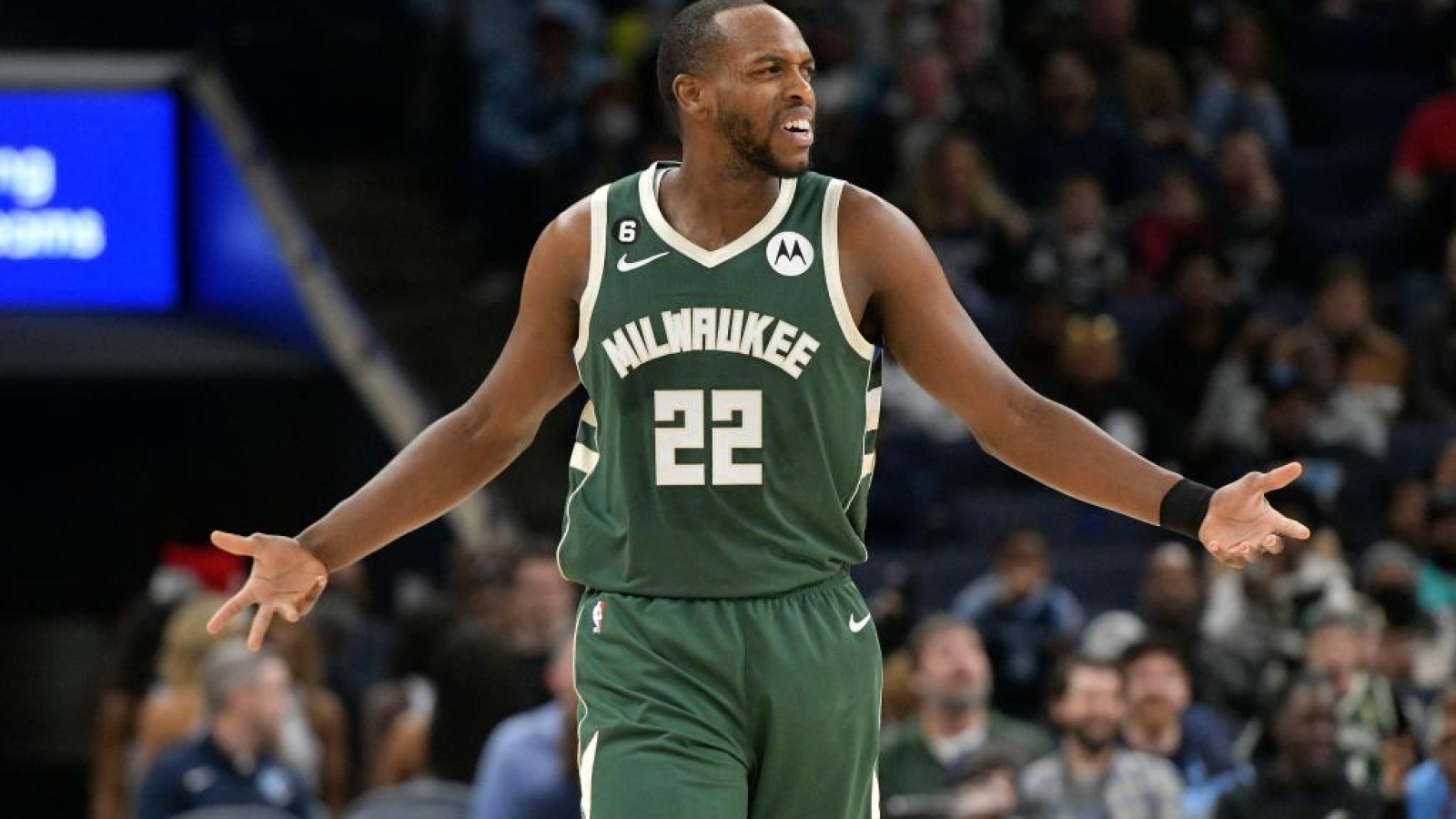 When fully healthy, the Milwaukee Bucks are probably the best team in the NBA. They crash the glass. They’re organized defensively. They stick to their offensive principles. They have Giannis Antetokounmpo.

Somewhere along the line, however, due to Antetokounmpo’s utter dominance, many perceived Milwaukee to be a one-man show. Khris Middleton’s absence proves the exact opposite.

Which is why I just think it’s funny how Bucks fans are slandering a man who is clearly vital to their championship hopes.

Milwaukee’s coach Mike Budenholzer said here in Brooklyn that Middleton’s knee injury isn’t healing as quickly as the team had hoped — and Bucks fans are already trying to ship this man out for Kyle Kuzma.

Might I remind you that had Middleton been available for Milwaukee’s second-round playoff series against the Boston Celtics, it might have been the Bucks who were hoisting the NBA Finals trophy at the end of the season. Not the Golden State Warriors.

And might I remind you it was Middleton who averaged 24 points per game to support Antetokounmpo during Milwaukee’s 2021 NBA Finals run.

Sometimes you don’t really know what you’ve got until it’s gone, and the Bucks just took two losses — one here in Brooklyn and another on Christmas Day to the Boston Celtics — dropping them from first to second in the East.

If the Bucks are going to have any hopes of returning to the NBA Finals, the Celtics and Nets will be in their path — and as great as Antetokounmpo is, Milwaukee will find it difficult to get back to the Finals if Middleton doesn’t have the time to ensure he gets healthy.

I just think it’s funny how the Warriors and Nets have kind of traded places this season.

Last year, due to injuries, Kyrie Irving not getting vaccinated and the midseason James Harden-for-Ben Simmons swap, the Nets never had a chance to build the chemistry needed to make a deep playoff run. That much was evident when the Celtics swept Nets off the Barclays Center floors in the first round of the playoffs last season.

The Warriors are kind of in that bucket now, which is why I asked Steve Kerr just how many games a team needs to play to have that rhythm entering the playoffs.

“There’s not a set number of games, but we’re well aware our margin of error gets slimmer as the season goes just because we’re pretty far down in the standings and we’ve gotta make a run here at some point,” he said. “And we’re confident that we can do that, but with this kind of start that we’ve had in the season, you’re really vulnerable later on if you get another injury.

“So we know where we are. We like our team and we like where we can go, but we understand that we’ve gotta pull it together here.”

I first started considering this question when Charles Barkley and Shaquille O’Neal debated it on “Inside the NBA.” With so many guys in and out of the rotation to start the season, I wondered if the Nets would have enough time to build chemistry this year (narrator: they do).

Barkley said teams need to play the entire second half of the season healthy to make a real push. About the same as Shaq’s 30-game measure, but all after the All-Star break.

The Warriors this season have only played 12 games at full strength. Stephen Curry is out an extended period of time with the first shoulder injury of his career. Andrew Wiggins hasn’t played since early December with a groin injury. Klay Thompson’s knee will require monitoring all season. The Warriors beat the Grizzlies on Christmas, but they’re still 11th in the Western Conference.

The clock’s ticking for the Warriors to get into playoff shape. The Grizzlies, Nuggets, Suns and Pelicans are all positioning themselves at the top of the conference. And if the Warriors fall into the Play-In Tournament, anything can happen against LeBron James or Luka Doncic in a sudden-death situation.

I think it’s real-life hilarious that one of the most unassuming NBA stars in the game’s history could be the first to three-peat as MVP since Larry Bird.

Nikola Jokic is very clearly ‘him’ to the point where it doesn’t appear there will be any voter fatigue keeping him off the MVP ballots this season. Antetokounmpo’s brute strength might make him the most dominant player in the league, but Jokic does almost everything Antetokounmpo can (at least offensively) — except with more grace, deeper range and better playmaking instincts.

Last season, I voted for Joel Embiid as MVP. Embiid had a strong case until he got hurt. Then The Joker made a surge. This season, Jokic is the runaway favorite and it’ll take an injury or another player playing out of his mind to catch him.

Though Luka Doncic’s historic 60-point triple-double with 20 rebounds surely puts him at the forefront of the conversation.

I just think it’s funny how James Harden never knows what the hell he wants.

The man forced a trade from Houston to Brooklyn, said he wanted to be in Philadelphia all along and now, in the middle of an eight-game Sixers winning streak, reports have surfaced suggesting he wants to GO BACK TO HOUSTON if things don’t work out in Philly in this season.

On one hand, we support a king’s right to exercise his options. But for Harden, this is pure jokes.

Because if the goal is to win a championship, going back to Houston where Jalen Green and Kevin Porter Jr. — two rising stars who need the ball in their hands — are still years from being playoff competent probably isn’t the best idea.

You know what else is a bad idea? Leaving Embiid. It’s Embiid carrying the Sixers to a deep playoff run this season. Harden’s making sure he gets the ball.

The Warriors and Grizzlies clearly have history — from when the Grizzlies eliminated them in the Play-In Tournament two seasons ago to when the Warriors beat them 4-2 in the Western Conference semifinals last season on their way to an NBA title.

The Grizzlies are a confident group who outwardly believe their time is now — not that they’re up next. Thompson and the Warriors are here to remind them they’ve still got a long road to go.

Which is why the Christmas Day showdown was so much fun, because there was so much trash talk both ways, headlined by Thompson, who hit a pull-up jumper, and when Dillon Brooks bumped into Steven Adams trying to contest then fell to the ground, Thompson side-strutted over him — almost like Allen Iverson stepping over Tyrone Lue — and said some words that earned him a technical foul.

“Just some good ol’ fashioned trash talk. I didn’t think it warranted a technical but I forgot about the taunting rule,” Thompson deadpanned after the victory. “It’s always fun to talk trash. We’ve been doing that since we were in middle school.”

The funniest thing Thompson said was to Malika Andrews during the immediate postgame interview.

“They [the Grizzlies] were talking about dynasty and all that. You can’t say dynasty when you haven’t won before,” Thompson said with a huge smile on his face. “I don’t think people realize how hard that is — the commitment and sacrifice. You’ve gotta sacrifice your body. And I thought that was premature talk to even mention that word, but they bring the best out of us.”

Those are some things I just thought were funny. Check back for Vol. 2 next month.