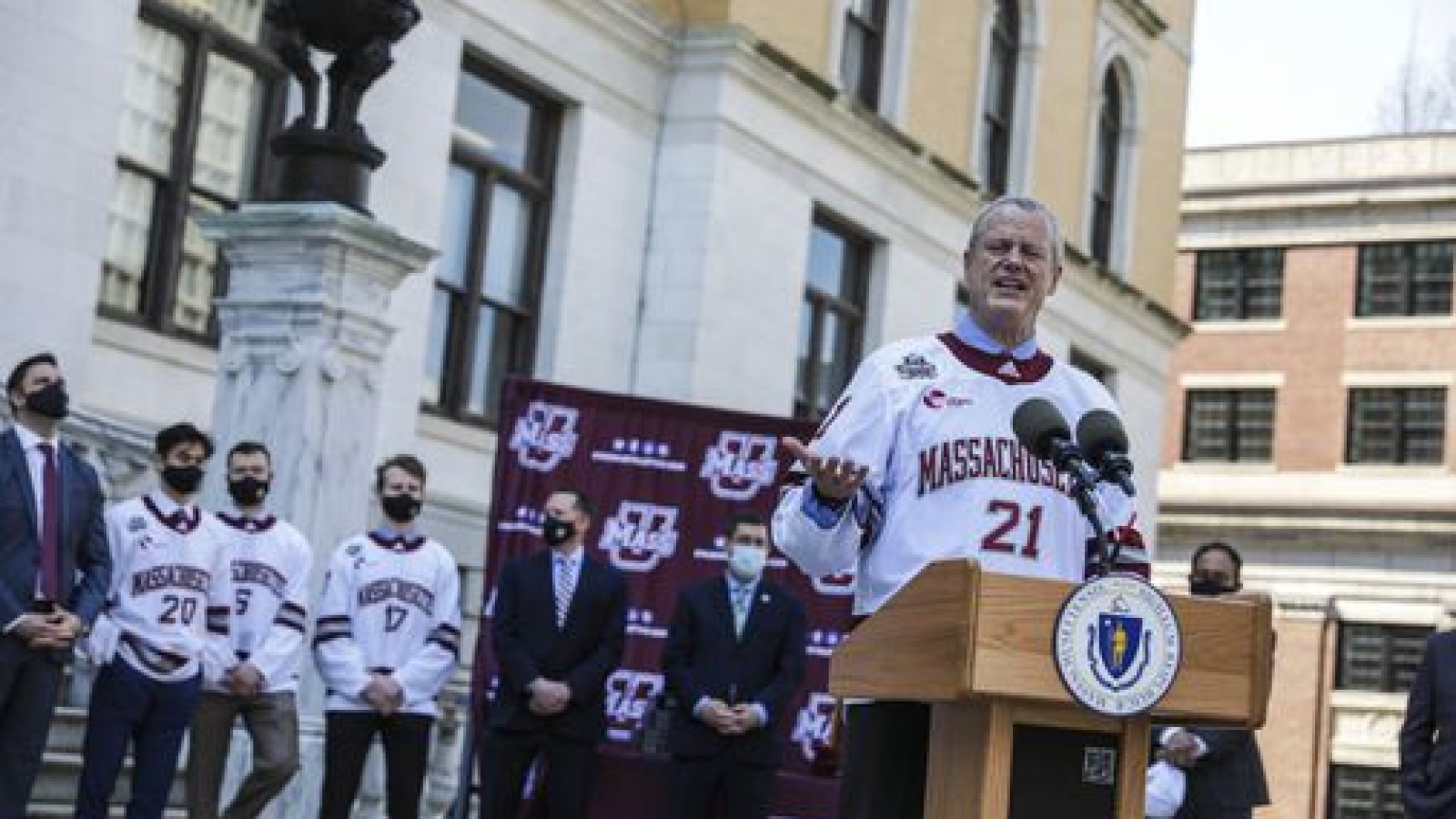 When the NCAA announced last week that Governor Charlie Baker would be its next president, it caught many by surprise. While you can include Steve Metcalf in that group, the Hockey East commissioner believes Baker checks off a lot of boxes, going back to his time as a member of the Harvard basketball team.

“He was a participant in college sports himself,” said Metcalf. “He’s got leadership experience, which is desperately needed at the NCAA, and he’s also got a lot of experience navigating politics and getting things done. I think that combination will serve him well.”

The two have met only a handful of times, most recently over Thanksgiving weekend in Ireland when both attended The Friendship Four. The two talked about the 2014 men’s hockey national championship won by Union, where Baker’s son was enrolled at the time, with Baker recalling not only some of the games, but referencing the players on the team and where some of them are playing now.

The Globe’s most recent sports headlines delivered to your inbox every morning.

The tournament in Belfast features two teams from the ECAC and two from Hockey East. This year marked the first time it was held since 2019, and the field consisted of UMass, UMass Lowell, Quinnipiac, and Dartmouth. Baker spoke at a dinner on Thanksgiving, addressing the athletes the night before the tournament began.

“He talked about how sports brings people together and challenges you to be great,” said Metcalf. “I thought it was inspirational. I suspect everyone there walked away thinking the same thing I did.”

“You can tell when you talk to him that he was an athlete, and I always appreciated that about him.” UMass coach Greg Carvel said via text this week.

When UMass won the NCAA championship in 2021, the State House was closed to the public as COVID-19 vaccinations were still being rolled out. Yet Baker still found a way to honor the national champions, presiding over a ceremony outside the building later that week.

Carvel and athletic director Ryan Bamford presented Baker with a UMass jersey with “Baker” stitched on the back, as well as the No. 21, representing the year the title was won. It’s a common occurrence at such events, with politicians posing dutifully for the cameras, before typically handing the jersey off to an aide.

But Baker received the gift enthusiastically, ditching his suit coat and sporting the jersey for the rest of the press availability.

Baker will need to bring that energy to his new role as he confronts some of the major issues facing the NCAA, including Name, Image, and Likeness (NIL), and the transfer portal. Metcalf can see how the two issues can be linked, with the possibility that a student-athlete could transfer for the financial opportunities that another school might offer them.

“What it seems like to many is that the NCAA has been too slow to react or get ahead of some of these issues, and now they’re in a position where they’re trying to play catch-up,” said Metcalf. “That just makes it more difficult.”

Now in his third season as commissioner, Metcalf knows those issues all too well. He previously spent more than two decades in athletic administration at the University of New Hampshire, serving as the deputy director of athletics for 10 years. He also served as chair for several committees, including the NCAA Division 1 men’s and women’s ice hockey committees, as well as national collegiate skiing.

“Whether on campus or in the national office, there were a lot of folks that thought the NCAA desperately needed new leadership,” said Metcalf. “I think there’s a lot of optimism that Charlie Baker can go in there and hopefully help.”

The 2023 IIHF World Junior Championship begins Monday, with Team USA opening the tournament against Latvia. The US won both of its pre-tournament games. There are four players from local schools on the US roster, and each figured in the scoring in Wednesday’s 5-1 win over Sweden. UMass freshman Kenny Connors scored a goal, with fellow Minuteman Ryan Ufko credited with an assist.

A pair of freshmen with Boston ties connected for another goal when Boston College’s Cutter Gauthier scored off a nice feed from Boston University’s Lane Hutson. Sweden’s goal was scored by Fabian Lysell, who was selected by the Bruins with the 21st overall pick of the 2021 NHL Draft and has eight goals and 11 assists in 20 games this season with Providence in the AHL..

Providence College freshman Jaroslav Chmelar will suit up for Team Czechia. The tournament is being held in Moncton, New Brunswick, and Halifax, Nova Scotia, and will conclude Jan. 5. All games can be seen live on NHL Network.