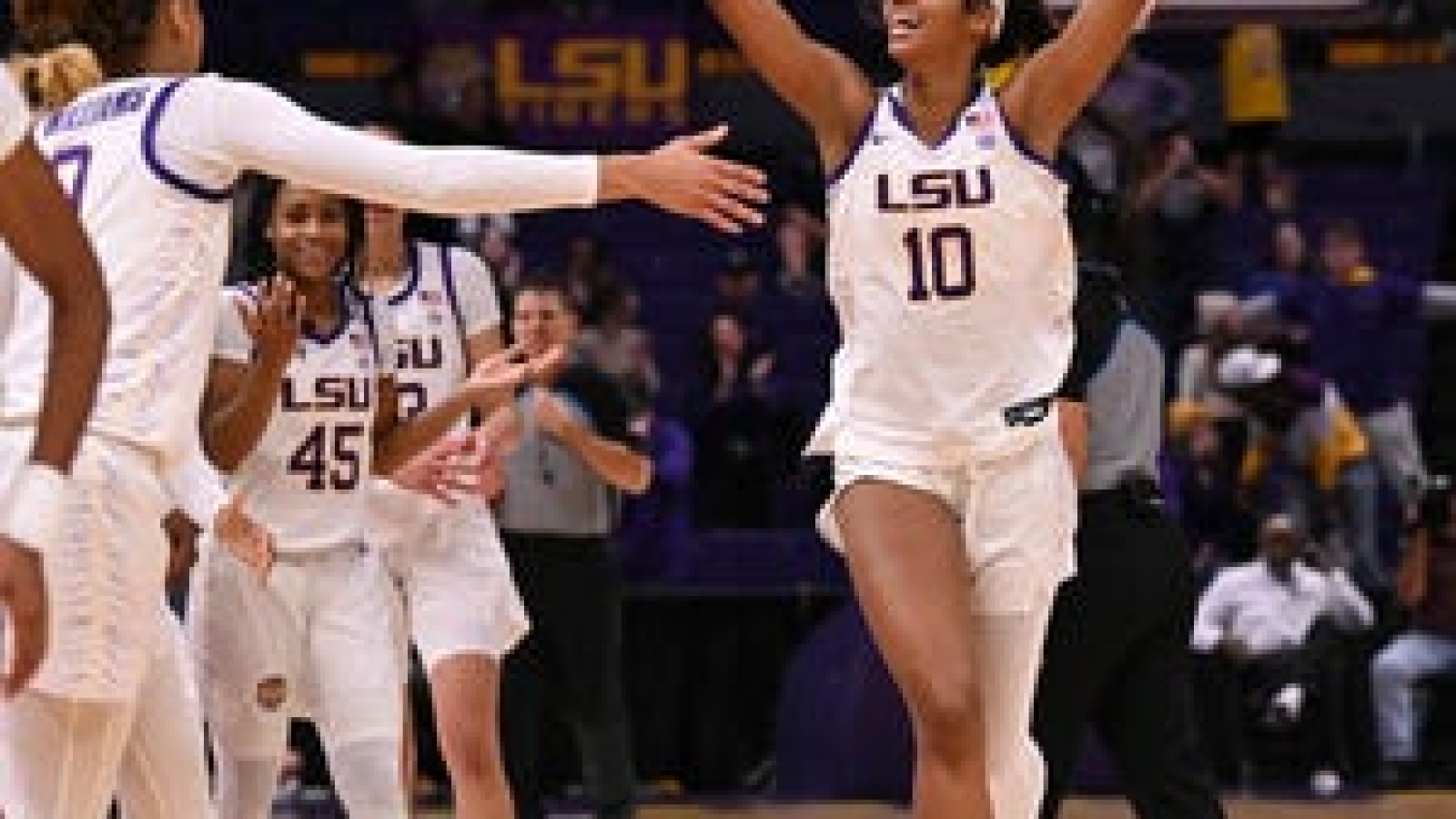 LSU women’s basketball chased down program history this weekend, securing the best start to a season at 16-0 after knocking off Kentucky on the road Sunday afternoon.

Plenty of questions surrounded this season for Kim Mulkey and her team before it tipped off as few squads experienced more roster turnover from last year and 80% of the offensive production walked out the door.

Mulkey and her staff brought in nine fresh faces via the transfer portal and high school signees to retool the roster. Those who know women’s college basketball knew Maryland sophomore transfer forward Angel Reese would be a star in Baton Rouge but no one might’ve predicted the 16 straight doubled-doubles she’s recorded to start her LSU career.

Expectations weren’t sky-high for the Tigers (16-0, 4-0) due to those unknowns but since the season began, they’ve climbed the rankings and now have their highest place in the AP Poll in 14 years at No. 5.

LSU BACK IN TOP-5LSU women’s basketball comes in at No. 5, earns best AP Poll ranking in 14 seasons

LSU holds the highest winning margin in the country at 41.1 points, the nation’s best rebound mark per game at 52.6, has a top-four field goal percentage at 49.9% and has a legitimate National Player of the Year candidate in Reese.

As Mulkey’s group continues to exceed expectations, another question has emerged. Can LSU claim a No. 1 seed for the NCAA Tournament?

Starting this year as low as it did in the polls at No. 13, the climb is steeper and has a little less room for error than some other teams.

But LSU has a path to one of the top four bids for March Madness. Here’s what the Tigers need to happen to clinch a No. 1 seed in the NCAA Tournament:

The Tigers must hold serve for the remainder of the season. They can’t afford to lose any SEC games against teams below them in the standings, like at Alabama, at Florida or to Tennessee, Ole Miss or Mississippi State.

These will all be tough tests but are must-win games for LSU in its No. 1-seed pursuit.

The only game on the Tigers’ schedule they can afford to lose is at No. 1 South Carolina on Feb. 12. The top-ranked and reigning national champion Gamecocks should be undefeated and so will LSU, should it take care of business, setting up a mega showdown at Colonial Life Arena late in the season.

Another layer to at least being the second-best team is that Mulkey and the gang will need to play for the SEC Tournament championship in Greenville, South Carolina, in March. Whether it plays South Carolina again or not will be irrelevant. LSU can ill-afford a repeat of how it flamed out of last season’s conference tournament with a one-and-done performance.

LSU will need some help from UConn, Ohio State, Indiana, others

Because of how weak its nonconference schedule was, there will be doubters on the committee as to how good LSU is. But if it keeps winning and gets help from other teams dropping some games, the selection committee won’t have a choice but to hand LSU a No. 1 seed.

Right now, UConn has been hit with what feels like a historic injury bug. It just had to postpone a conference game against DePaul because it only had six healthy players. Paige Bueckers, Azzi Fudd, Aaliyah Edwards, Caroline Ducharme, Ayanna Patterson and Ice Brady are all hurt and unavailable for the Huskies. Coach Geno Auriemma also has been away from the team for a couple of weeks and it’s unclear when he’ll be back as he recently lost his mother and he’s reportedly been feeling fatigued.

In what’ll likely be a top-10 matchup, Ohio State and Indiana will face off later in January. The Buckeyes also have two more ranked games coming up against No. 17 Michigan and No. 9 Maryland. If Ohio State loses, it could slingshot LSU past them in the rankings.

Cory Diaz covers the LSU Tigers and Louisiana Ragin’ Cajuns for The Daily Advertiser as part of the USA TODAY Network. Follow his Tigers and Cajuns coverage on Twitter: @ByCoryDiaz. Got questions regarding LSU/UL athletics? Send them to Cory Diaz at bdiaz@gannett.com.