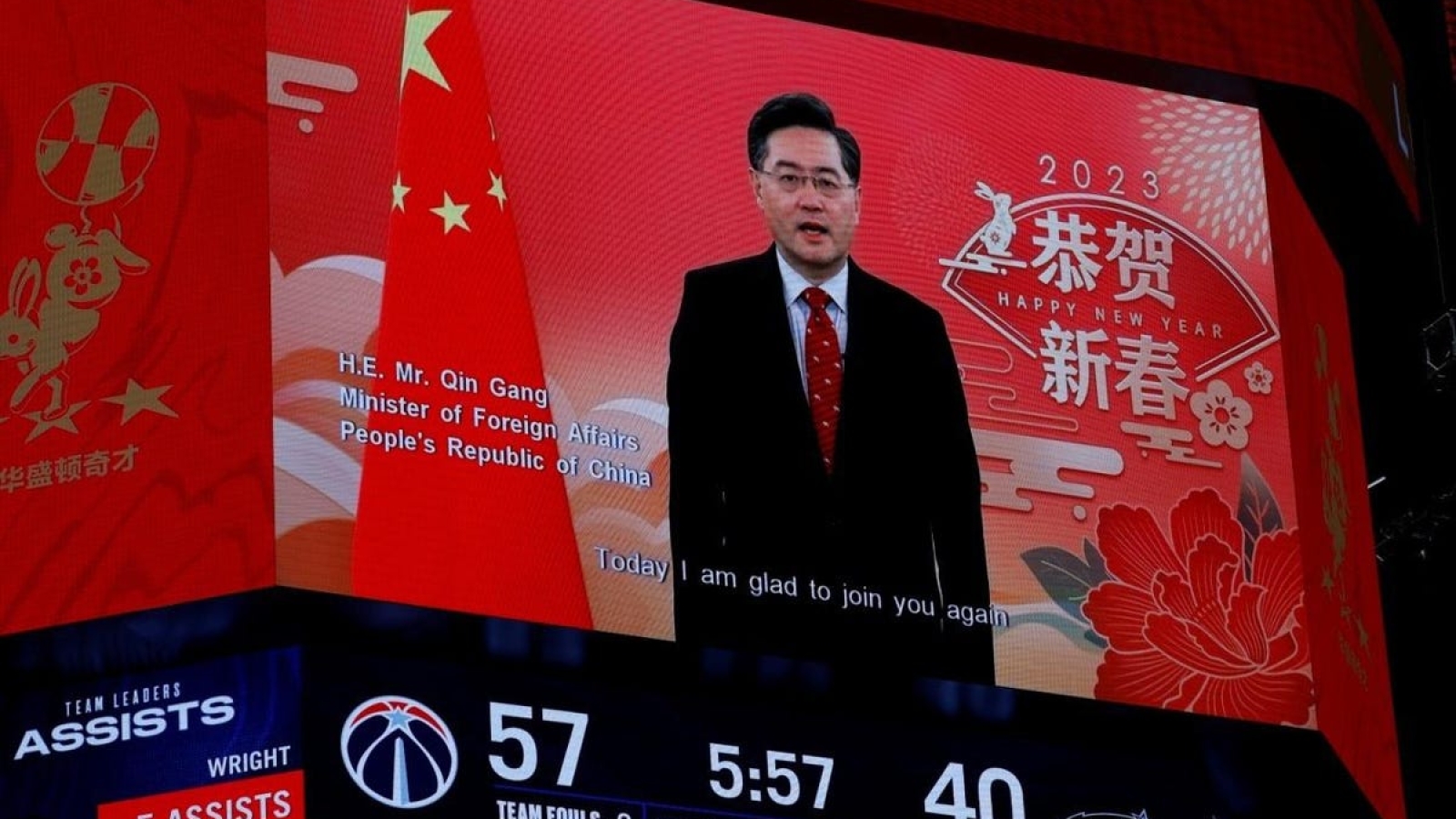 China diplomat Qin Gang won plaudits at a time of difficult Washington-Beijing relations for getting out to meet the American public as the country’s ambassador to the United States from mid-2021 until earlier this year. Stops in 2022 included a Washington Wizards NBA game, where he shot a basket last month, as well as Garland High School in in Dallas in May, where he wore a cowboy hat. Qin’s success helped to get him promoted to his current job as China’s Foreign Minister.

Now based in Beijing, Qin spoke to Americans anew on Saturday by pre-recorded video, using a NBA match between the Wizards and Orlando Magic to express good wishes on the eve of the Chinese New Year.

Qin’s messaging at a sports event harkens back to U.S.-China ping-pong diplomacy of the early 1970s before the two countries had formal diplomatic relations, and reminds of how “sports exchanges and sports have strengthened U.S.-China relations,” New York-headquartered National Committee on U.S.-China Relations President Steve Orlins said by email today.

“The spirit of the young ping-pong players was epitomized by their saying and demonstration (of) ‘friendship first, competition at second,’” said Orlins, whose non-profit group organized a U.S. visit by the Chinese table-tennis team in 1972, a year after American counterparts made history by traveling to the mainland.

“Minister Qin’s using an NBA game for his New Year’s greeting to the American people is an imaginative way to remind Americans that we share many things with China including love of the NBA,” Orlins noted.

The National Committee on U.S.-China Relations promotes “understanding and cooperation between the United States and Greater China in the belief that sound and productive Sino-American relations serve vital American and world interest,” according to its website.

Saturday’s NBA game – won by the Wizards, 138 to 118 – “was filled with festive atmosphere and Chinese cultural elements,” according to a statement posted at the Embassy’s website. “Two American Chinese artists played the U.S. National Anthem with Pipa, a traditional Chinese plucked string instrument.”

The Wizards, formerly known as the Washington Bullets, were the first NBA team to visit China shortly after U.S.-China diplomatic relations were formed in 1979. “The team has since carried on the tradition of friendship and visited China several times. It also played several warm-up games with Chinese basketball teams visiting the United States,” the Embassy said.

Among Qin’s early notable American government visitors as foreign minister is expected to be U.S. Secretary of State Antony Blinken to Beijing in February. That would follow a meeting between U.S. President Joe Biden and China President Xi Jinping in November ahead of the APEC Summit in Bali. Qin succeeded Wang Yi as foreign minister at a time when relations with the United States have been strained over geopolitical issues – most notably Taiwan – as well as trade disagreements.

Qin, whose previous positions include ministry spokesman in Beijing, has regularly posted on Twitter, and at times has bought a soft touch to the complex Sino-U.S. relationship although he is also known as a “wolf warrior” over criticism of the West.

“Tried my first throw at an NBA game @WashWizards,” Qin said in a Tweet dated Dec. 27. “Also renewed our special relationship as Washington Wizards was the first NBA team to visit China in 1979 when our two countries established diplomatic relationship.”

In an interview with Forbes in May held in Washington, D.C., Qin was upbeat about overall ties between the two nations despite trade conflicts. “We are natural partners, because our economies are highly complementary,” he told me. “We are very optimistic about the potential and opportunities between our two countries.”

Speaking virtually at the U.S.-China Business Forum held at Forbes on Fifth in August, Qin, a fluent English speaker, was also optimistic about China’s potential to recover from Covid-related issues in the longer term.