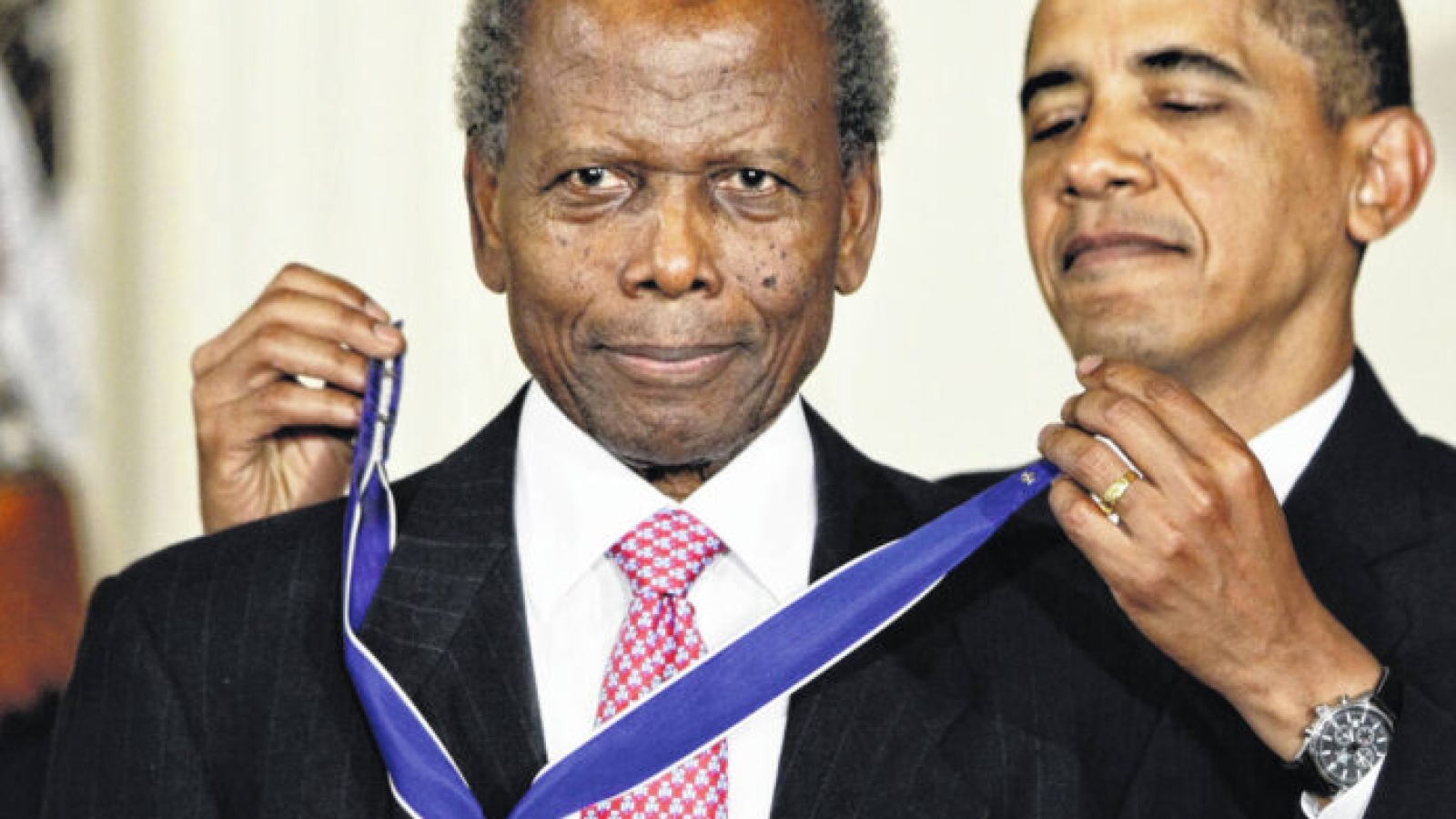 Sidney Poitier was a groundbreaking actor, who played roles with such dignity that it helped change the way Black people are portrayed on screen. Poitier, who died in January, was one of the people to die in the first half of 2022.

Poitier became the first Black actor to win the Academy Award for Best Actor for his role in the 1963 film “Lilies of the Field.”

Here is a roll call of some influential figures who died in the first half of 2022 (cause of death cited for younger people, if available):

Dan Reeves, 77. He won a Super Bowl as a player with the Dallas Cowboys but was best known for a long coaching career that included four blowout losses in the title game with the Denver Broncos and the Atlanta Falcons. Jan. 1.

Peter Bogdanovich, 82. The ascot-wearing cinephile and director of 1970s black-and-white classics like “The Last Picture Show” and “Paper Moon.” Jan. 6.

Sidney Poitier, 94. He played roles of such dignity and intelligence that he transformed how Black people were portrayed on screen, becoming the first Black actor to win an Oscar for best lead performance and the first to be a top box-office draw. Jan. 6.

Bob Saget, 65. The actor-comedian known for his role as beloved single dad Danny Tanner on the sitcom “Full House” and as the wisecracking host of “America’s Funniest Home Videos.” Jan. 9.

Dwayne Hickman, 87. The actor and network TV executive who despite numerous achievements throughout his life would always be remembered fondly by a generation of baby boomers for his role as Dobie Gillis. Jan. 9.

Robert Durst, 78. The wealthy New York real estate heir and failed fugitive dogged for decades with suspicion in the disappearance and deaths of those around him before he was convicted last year of killing his best friend. Jan. 10.

Clyde Bellecourt, 85. A leader in the Native American struggle for civil rights and a founder of the American Indian Movement. Jan. 11.

Fred Parris, 85. The lead singer of the 1950s harmony group the Five Satins and composer of the classic doo-wop ballad “In the Still of the Night.” Jan. 13.

Charles McGee, 102. A Tuskegee Airman who flew 409 fighter combat missions over three wars and later helped to bring attention to the Black pilots who battled racism at home to fight for freedom abroad. Jan. 16.

André Leon Talley, 73. A towering and highly visible figure of the fashion world who made history as a rare Black editor in an overwhelmingly white industry. Jan. 18.

Meat Loaf, 74. The rock superstar loved by millions for his “Bat Out of Hell” album and for such theatrical, dark-hearted anthems as “Paradise By the Dashboard Light,” “Two Out of Three Ain’t Bad,” and “I’d Do Anything for Love (But I Won’t Do That).” Jan. 20.

Louie Anderson, 68. His four-decade career as a comedian and actor included his unlikely, Emmy-winning performance as mom to twin adult sons in the TV series “Baskets.” Jan. 21.

Thich Nhat Hanh, 95. The revered Zen Buddhist monk who helped spread the practice of mindfulness in the West and socially engaged Buddhism in the East. Jan. 22.

Howard Hesseman, 81. He played the radio disc jockey Dr. Johnny Fever on the sitcom “WKRP in Cincinnati” and the actor-turned-history teacher Charlie Moore on “Head of the Class.” Jan. 29.

Cheslie Kryst, 30. The winner of the Miss USA pageant and a correspondent for the entertainment news program “Extra.” Jan. 30. Died by suicide.

Robin Herman, 70. A gender barrier-breaking reporter for The New York Times who was the first female journalist to interview players in the locker room after an NHL game. Feb. 1.

Ashley Bryan, 98. A prolific and prize-winning children’s author and illustrator who told stories of Black life, culture and folklore in such acclaimed works as “Freedom Over Me,” “Beautiful Blackbird” and “Beat the Story-Drum, Pum-Pum.” Feb. 4.

Luc Montagnier, 89. A French researcher who won a Nobel Prize in 2008 for discovering the HIV virus and more recently spread false claims about the coronavirus. Feb. 8.

Ivan Reitman, 75. The influential filmmaker and producer behind many of the most beloved comedies of the late 20th century, from “Animal House” to “Ghostbusters.” Feb. 12.

P.J. O’Rourke, 74. The prolific author and satirist who re-fashioned the irreverence and “Gonzo” journalism of the 1960s counterculture into a distinctive brand of conservative and libertarian commentary. Feb. 15.

Bappi Lahiri, 69. A popular Bollywood singer and composer who won millions of fans with his penchant for feet-tapping disco music in the 1980s and 1990s. Feb. 15.

Gail S. Halvorsen, 101. A U.S. military pilot known as the “Candy Bomber” for his candy airdrops during the Berlin Airlift after World War II ended. Feb. 16.

Dr. Paul Farmer, 62. A U.S. physician, humanitarian and author renowned for providing health care to millions of impoverished people worldwide and who co-founded the global nonprofit Partners in Health. Feb. 21.

Mark Lanegan, 57. The singer whose raspy baritone and darkly poetic songwriting made Screaming Trees an essential part of the early Seattle grunge scene and brought him an acclaimed solo career. Feb. 22.

Autherine Lucy Foster, 92. The first Black student to enroll at the University of Alabama. March 2.

Emilio Delgado, 81. The actor and singer who for 45 years was a warm and familiar presence in children’s lives and a rare Latino face on American television as fix-it shop owner Luis on “Sesame Street.” March 10.

Traci Braxton, 50. A singer who was featured with her family in the reality television series “Braxton Family Values.” March 12.

William Hurt, 71. His laconic charisma and self-assured subtlety as an actor made him one of the 1980s foremost leading men in movies such as “Broadcast News,” “Body Heat” and “The Big Chill.” March 13.

Eugene Parker, 94. A physicist who theorized the existence of solar wind and became the first person to witness the launch of a spacecraft bearing his name. March 15.

Lauro F. Cavazos Jr., 95. A Texas ranch foreman’s son who rose to become the first Latino to serve in a presidential Cabinet as U.S. Secretary of Education during the administrations of Ronald Reagan and George H.W. Bush. March 15.

Don Young, 88. The Alaska congressman was the longest-serving Republican in the history of the U.S. House. March 18.

Madeleine Albright, 84. A child refugee from Nazi- and then Soviet-dominated Eastern Europe who rose to become the first female secretary of state and a mentor to many current and former American statesmen and women. March 23.

Taylor Hawkins, 50. For 25 years, he was the drummer for Foo Fighters and best friend of frontman Dave Grohl. March 25.

Bobby Rydell, 79. A pompadoured heartthrob of early rock ’n roll who was a star of radio, television and the movie musical “Bye Bye Birdie.” April 5.

Harrison Birtwistle, 87. The creator of daringly experimental modern music who was recognized as one of Britain’s greatest contemporary composers. April 18.

Robert Morse, 90. An actor who won a Tony Award as a hilariously brash corporate climber in “How to Succeed in Business Without Really Trying” and a second one a generation later as the brilliant, troubled Truman Capote in “Tru.” April 20.

Orrin G. Hatch, 88. The longest-serving Republican senator in history who was a fixture in Utah politics for more than four decades. April 23.

Naomi Judd, 76. Her family harmonies with daughter Wynonna turned them into the Grammy-winning country stars The Judds. April 30. Died by suicide.

Kathy Boudin, 78. A former Weather Underground radical who served more than two decades behind bars for her role in a fatal 1981 armored truck robbery and spent the latter part of her life helping people who had been imprisoned. May 1.

Norman Mineta, 90. He broke racial barriers for Asian Americans serving in high-profile government posts and ordered commercial flights grounded after the 9/11 terror attacks as the nation’s federal transportation secretary. May 3.

Stanislav Shushkevich, 87. He steered Belarus to independence during the breakup of the Soviet Union and served as its first leader. May 4.

Mickey Gilley, 86. A country singer whose namesake Texas honky-tonk inspired the 1980 film “Urban Cowboy” and a nationwide wave of Western-themed nightspots. May 7.

Fred Ward, 79. A veteran actor who brought a gruff tenderness to tough-guy roles in such films as “The Right Stuff,” “The Player” and “Tremors.” May 8.

Midge Decter, 94. A leading neoconservative writer and commentator who in blunt and tenacious style helped lead the right’s attack in the culture wars as she opposed the rise of feminism, affirmative action and the gay rights movement. May 9.

Leonid Kravchuk, 88. He led Ukraine to independence amid the collapse of the Soviet Union and served as its first president. May 10.

Bob Lanier, 73. The left-handed big man who muscled up beside the likes of Kareem Abdul-Jabbar as one of the NBA’s top players of the 1970s. May 10.

Randy Weaver, 74. The patriarch of a family that was involved in an 11-day Idaho standoff with federal agents 30 years ago that left three people dead and helped spark the growth of antigovernment extremists. May 11.

Robert C. McFarlane, 84. The former White House national security adviser was a top aide to President Ronald Reagan who pleaded guilty to charges for his role in an illegal arms-for-hostages deal known as the Iran-Contra affair. May 12.

Sheikh Khalifa bin Zayed Al Nahyan, 73. The United Arab Emirates’ long-ailing ruler and president who oversaw much of the country’s blistering economic growth and whose name was immortalized on the world’s tallest building, the Burj Khalifa. May 13.

Rosmarie Trapp, 93. Her Austrian family the von Trapps was made famous in the musical and beloved movie “The Sound of Music.” May 13.

Vangelis, 79. The Greek electronic composer who wrote the unforgettable Academy Award-winning score for the film “Chariots of Fire” and music for dozens of other movies, documentaries and TV series. May 17.

Cardinal Angelo Sodano, 94. A once-powerful Italian prelate who long served as the Vatican’s No. 2 official but whose legacy was tarnished by his support for the pedophile founder of an influential religious order. May 27.

Ronnie Hawkins, 87. A brash rockabilly star from Arkansas who became a patron of the Canadian music scene after moving north and recruiting a handful of local musicians later known as the Band. May 29.

Ann Turner Cook, 95. Her cherubic baby face was known the world over as the original Gerber baby. June 3.

Jim Seals, 80. He teamed with fellow musician “Dash” Crofts on such 1970s soft-rock hits as “Summer Breeze,” “Diamond Girl” and “We May Never Pass This Way Again.” June 6.

Mark Shields, 85. A political commentator and columnist who shared his insight into American politics and wit on “PBS NewsHour” for decades. June 18.

Clela Rorex, 78. A former Colorado county clerk considered a pioneer in the gay rights movement for being the first public official to issue a same-sex marriage license in 1975. June 19.

Józef Walaszczyk, 102. A member of the Polish resistance who rescued dozens of Jews during the Nazi German occupation of Poland during World War II. June 20.

Tony Siragusa, 55. The charismatic defensive tackle who was part of one of the most celebrated defenses in NFL history with the Baltimore Ravens. June 22.

Leonardo Del Vecchio, 87. He founded eyewear empire Luxottica in a trailer and turned an everyday object into a global fashion item, becoming one of Italy’s richest men in the process. June 27.

Hershel W. “Woody” Williams, 98. The last remaining Medal of Honor recipient from World War II, whose heroics under fire over several crucial hours at the Battle of Iwo Jima made him a legend in his native West Virginia. June 29.

Sonny Barger, 83. The leather-clad fixture of 1960s counterculture and figurehead of the Hells Angels motorcycle club who was at the notorious Rolling Stones concert at Altamont Speedway. June 29.