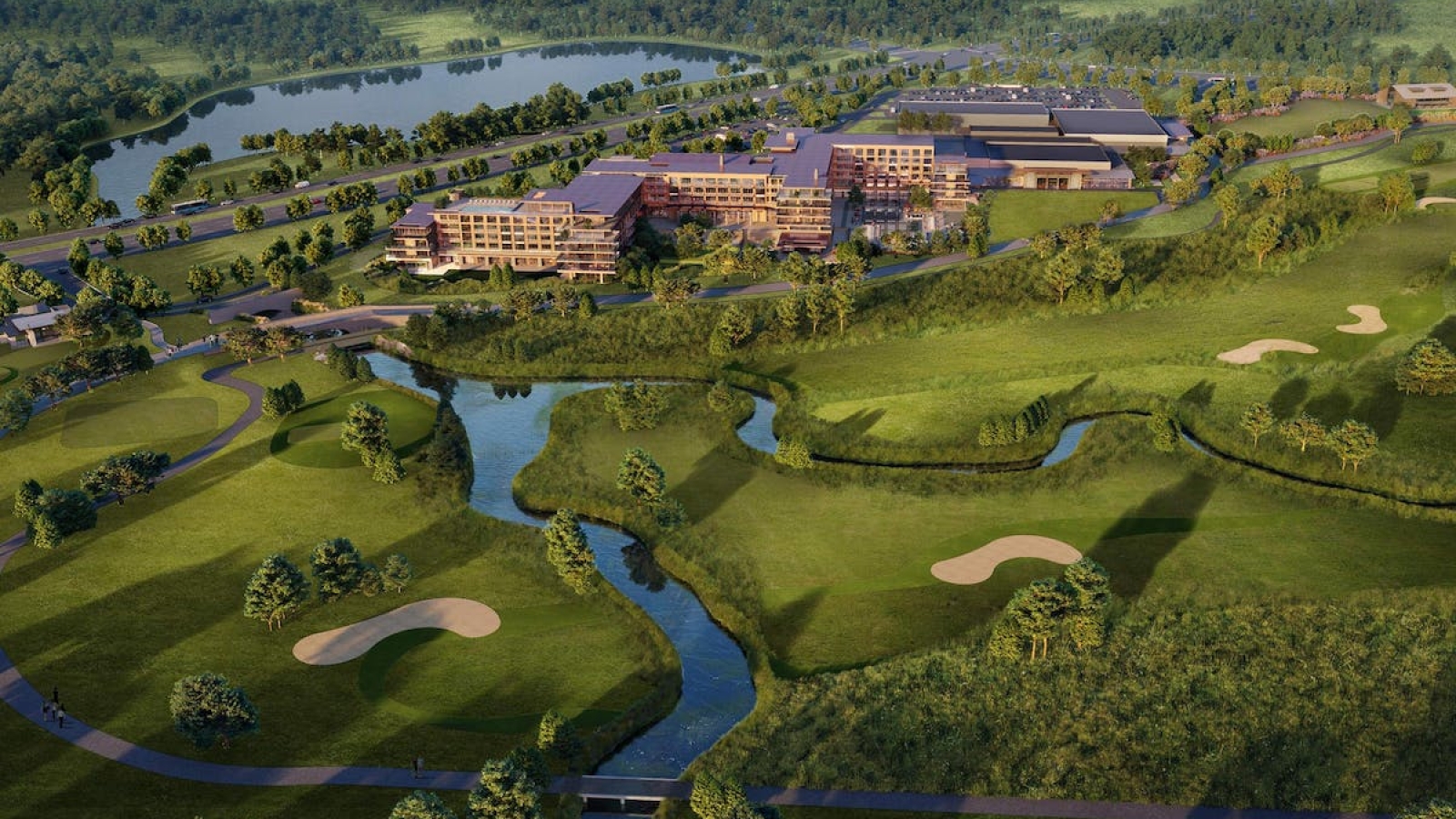 As the Dallas North Tollway unfurls through the northern reaches of DFW’s urban sprawl, seas of matching McMansion rooftops give way to empty fields. It’s here, at the northernmost fringe of Frisco, that PGA Parkway veers off to the west and leads to the largest resort currently under construction in the nation.

One recent morning, Jeff Smith, the vice president and managing director at Omni PGA Frisco Resort, slid into the driver’s seat of a golf cart outside his office, which occupies a trailer on the construction site. A truck rumbled by to deposit a thirty-foot-tall oak tree, its roots bound in burlap, in a row of dozens more trees waiting to be planted. In all, the $520 million property will include some 2,500 new trees on its 660 acres, Smith said.

Smith, who previously served as general manager of the Omni Frisco Hotel, in a sixteen-story glassy building at the Star development, rattled off some of the other standout features of the enormous new resort. There will be five hundred rooms and suites and ten luxury villas, he said, as he drove past a cluster of the latter. These sprawling, contemporary ranch homes are intended to host corporate events and wedding parties. There will also be thirteen dining options, two eighteen-hole championship-caliber golf courses, one of the world’s largest natural-grass putting greens, and a Topgolf virtual golf lounge. The complex will have myriad stores, including one for the wee duffers called Gimme Toys. The list of over-the-top attractions went on, including a horse-shaped chandelier inspired by the glamorous mid-century rodeo legend Sydna Yokley Woodyard. It will hang over the bar at Trick Rider, the on-site steakhouse.

After two years of construction, the Omni will officially open on May 2, and—you heard it here first—the resort quietly began accepting hotel reservations from the general public in late December, for now only on its own website. The property will go live on third-party booking sites on January 11.

The opening is a landmark moment for Frisco—and for Texas—for a number of reasons. For one, the Omni PGA Resort will instantly become the second-largest resort in the state. The gargantuan JW Marriott San Antonio Hill Country Resort has roughly double the new Omni’s total room count, with more than a thousand spots, but beyond that, only four other resorts come close. La Cantera, the Omni Barton Creek, and the Hyatt Regency Lost Pines all have just under five hundred rooms. The Hyatt Regency Hill Country matches the Omni’s five hundred rooms but falls short on the overall acreage and the amount of golf.

All of the above, it’s worth noting, are around Austin and San Antonio. In North Texas, the next-largest resort, the four-decade-old Las Colinas, has around four hundred rooms and needs an upgrade. “There hasn’t been a resort like this built in Texas in a long time,” Smith said. That is, in the nation’s fourth-largest metro area, anchored by a city with a long history of pursuing and flaunting the trappings of wealth, residents have until recently had to drive a few hours south (or fly somewhere else altogether) to soak up a modern megaresort experience.

For Frisco, the opening of the Omni PGA Resort is the latest manifestation of an aggressive urban-development philosophy. The city has used public-private incentive deals to rapidly turn a swath of the North Texas prairie into one of the fastest-growing cities in the country. (Frisco keeps popping up on best-city lists; one recent ranking even slotted it as second in the nation, behind nearby Plano, as a work-from-home destination.) The Omni represents a continuation of the city’s use of such deals to focus on drawing in big-time sports facilities. Frisco is already home to the RoughRiders minor league ballpark, the headquarters of the NHL Dallas Stars, the FC Dallas soccer stadium, and, of course, the Dallas Cowboys’ headquarters at the Star. It all adds up to a city nickname that now feels more accurate than aspirational: Sports City USA.

In truth, the development of the resort is one part of a larger deal that goes back to 2018, when the city won a nationwide bidding process for the PGA of America to relocate its headquarters from Palm Beach County, Florida. That deal, a $160 million incentive offer from the city and the state, was larger even than the $115 million package that drew the Cowboys north and gave rise to the Star. (It’s also one of the biggest incentive deals in Texas history, though it pales in comparison to the nearly $1 billion Samsung snagged to build a factory in Taylor, outside Austin.)

Like the Cowboys deal and the one for FC Dallas, the PGA plan also involved the Frisco Independent School District. Area high schoolers not only get to play football on the Cowboys’ indoor practice field and in an MLS stadium, but they’ll now hit the links on courses by star designers Gil Hanse and Beau Welling—the same spots that will host the 2027 and 2034 PGA Championships, the 2025 and 2031 KPMG Women’s PGA Championships, and, if all goes according to plan, the 2041 Ryder Cup. “Someday there’s going to be a famous golfer that will emerge from this school system—which is pretty cool,” Smith mused.

Wes Pierson, Frisco’s new city manager (he replaces George Purefoy, the visionary who retired last year after engineering the city’s growth for three and a half decades), sees the resort as the linchpin in the next phase of the city’s build-out. Much of the northern reaches of Frisco was until recently part of one sprawling ranch owned by a banker named Bert Fields, whose family owned the land for generations. Now known as the Fields development, a sprawling 2,500-acre tract of gently rolling hills is slated to soon include more than 10,000 homes and up to 18 million square feet of commercial space, all built to serve the hypothetical employees of the next round of corporations relocating to the area. “Something like the PGA can accelerate that process, because everybody sees what’s happening and says, ‘We want to invest there too and see what we can do to build on it,’ ” Pierson said. Omni announced this week that it’s hiring for more than one thousand new jobs at the resort.

In Pierson’s vision, the area will become “an international draw, the new home of golf.” And, to be sure, the new resort complex is instrumental to the future of the sport—or, at least, a good reflection of the vision for it. When the PGA of America announced its relocation in 2018, golf had been flagging for fifteen years. There were 6.8 million fewer golfers in 2018 than in 2003, a drop of 22 percent. According to a report from John Crompton, a Texas A&M professor who studies tourism, “the decline is a function of the high cost of playing, difficulty of courses, and the game’s incompatibility with contemporary lifestyles.”

Hence all the diversity of venues and activities at the Omni—what the National Golf Foundation calls “off-course activities.” To combat the perception that the sport is too wealthy and white and exclusive, the new Frisco courses will be open to the public, not just to resort guests. Anyone can come test themselves on 36 world-class holes, or play more casually—day or night—on the lighted, 10-hole pitch-and-putt course.

As it turned out, COVID lockdowns fueled a renewed interest in the sport, with both a surge of new players and more rounds played by existing players, according to the NGF. The increase has so far continued, meaning the resort will launch in time to ride a positive wave. “Golf growth has never been stronger in this country,” Smith declared. He gazed at the expansive putting green, dubbed the Dance Floor, and drifted into a reverie about a hypothetical family dining in the adjacent entertainment district and the children begging, “Mommy, Daddy, can we go out and putt?,” before heading out onto the seemingly endless span of grass for a wholesome good time.

A battery of sprinklers hissed into action on the newly installed fairways off the golf cart’s starboard side as Smith spoke, and a team of people tested a JumboTron at one end of an event lawn near the Ice House, a freestanding, garagelike bar building modeled after a classic Texas watering hole. Smith envisioned corporate receptions enlivened by everyone’s results appearing on the big screen. The PGA’s new headquarters building stood in the distance to the west, and construction fencing lined fields that stretched off to the east. Sports City was just about ready for its close-up.