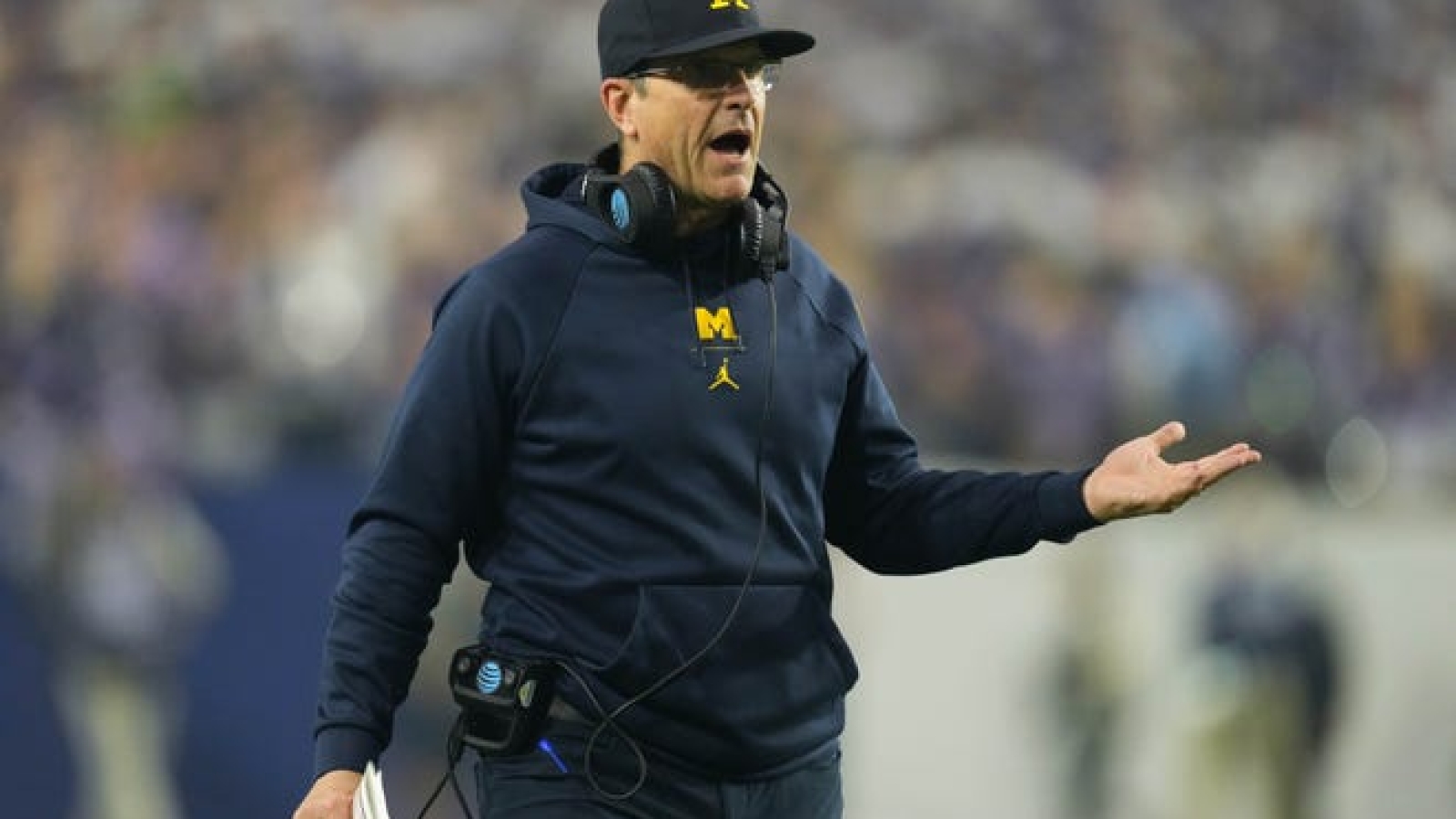 Trying to crawl inside the mind of Jim Harbaugh would probably end up like one of those lab exercises where they put a mouse in a giant labyrinth and see whether it can find its way out. Not only is it impossible, the journey would be frightening.

Harbaugh, however, may not be quite as slick or unpredictable as he’s gotten credit for. The last few days, the man who revels in saying nothing of substance is starting to show his cards.

What’s with all the sudden talk that he’s ready to go back to the NFL? Why put out a statement through the University of Michigan that he “expects” to remain there in 2023, albeit with the caveat that “no one knows what the future holds?”

Well, a giant piece of that puzzle dropped Thursday night when multiple outlets, led by The Athletic, reported that Michigan is under NCAA investigation for some potential violations during the COVID-19 dead period in 2020 and that Harbaugh in particular could be in some trouble for providing false or misleading information to the NCAA enforcement staff, considered a Level 1 (most serious) breach.

It remains to be seen how big of a deal this will become. Michigan has just recently received its Notice of Allegations, which is the beginning of a process that will likely take months and months to resolve.

The underlying violations at the root of the case seem minor. Impermissible contact with recruits and improperly using an analyst as an on-field coach are not high crimes in the NCAA ecosystem. Sometimes these things happen. The best thing for schools to do is cop to whatever violations took place, accept a small punishment and move on.

But if Harbaugh lied to NCAA investigators or wasn’t forthcoming in the interview process, then a nothing case automatically becomes a big deal. Whether you like or loathe the NCAA, its often ridiculous rules and its shoddy enforcement process, the only real hammer it can wield is catching a player, coach or administrator in a lie — even a minor one.

This kind of thing, for example, is what got basketball coach Bruce Pearl fired from Tennessee in 2011 and cast out of college coaching for the next three years. It wasn’t because he had recruits over to his house for a barbecue when they weren’t supposed to be there; it was his failure to admit it to NCAA investigators, who already had photographic evidence in hand and confirmation from one of the attendees.

MORE:Jim Harbaugh accused of Level I violation in notice of allegations

Nobody is suggesting Harbaugh is in that kind of jeopardy. Quite the opposite, in fact. School officials were well aware of the charges against Harbaugh by the time Michigan’s official athletic department account tweeted his statement Thursday about intending to return for the 2023 season along with the caption, “A Michigan Man through and through.”

At minimum, that suggests the university is ready to stand with Harbaugh for whatever comes next, which could include some type of suspension if the Level 1 charge sticks. And why not? All he’s done the last couple of years is beat Ohio State twice, win a pair of Big Ten titles and get the Wolverines to the College Football Playoff in consecutive years. At a school where things can go really bad really fast with the wrong guy in charge (see Hoke, Brady and Rodriguez, Rich), it would be absurd to think Michigan will do better if Harbaugh bolts.

And yet, it’s hard to think of many things that would be more embarrassing personally to Harbaugh than having the scarlet letter of being an NCAA rule-breaker. For all we know, it may be why he couldn’t bring himself to acknowledge that Michigan may have cheated, even as minor as it may have been.

The world has long moved on from taking the NCAA seriously or caring about its voluminous rule book. Just consider how Harbaugh reacted in 2016 when both Nick Saban and Kirby Smart suggested that Michigan was exploiting a loophole by setting up so-called “satellite camps” for recruiting throughout the Southeast.

“‘Amazing” to me- Alabama broke NCAA rules & now their HC is lecturing us on the possibility of rules being broken at camps. Truly ‘amazing,’” Harbaugh tweeted, referencing an NCAA violations case in 2015 that led to the dismissal of former assistant coach Bo Davis.

And a couple of months earlier, when Smart suggested the NCAA will “have to step in” because Michigan set up spring practice at IMG Academy, Harbaugh shot back: “If the Georgia coach is implying any intent on our part to break rules, he is barking up the wrong tree.”

When you brand yourself as a white knight of amateurism, which Harbaugh and his Michigan Man minions have done time and again throughout his career as a college coach, it won’t be pretty when the world suddenly sees you’ve been doing business the same way as everyone else. That’s just the way this stuff works.

And if you’re trying to look at it the way Harbaugh might, why stick around to deal with that nonsense? Especially right now, having dutifully fulfilled every realistic objective that was expected of him coming back to his alma mater. Michigan was a mess when he got there in 2015. It is now a top-five program in the country. If his tenure ends now, it’s a smashing success.

But it would be a shame for the sport if it comes to that. Harbaugh may be a creature of the NFL, and his yearning to hoist a Super Bowl trophy may be the biggest of all his professional goals, but at the end of the day, he’s just another good coach in that league. At Michigan, he’s a superstar whose quirkiness adds to the rich tapestry of what makes college football fun and unique.

Unless there is more to the NCAA investigation than what has been reported thus far, it would be merely a blip in Harbaugh’s tenure if he stays. Do the necessary mea culpas, accept the penalties and figure out how to go beat Ohio State one more time.

But if Harbaugh truly wants to run back into the arms of the NFL and take one more shot at a Super Bowl, he now has his ready-made excuse. That would be the easier thing, certainly the more lucrative thing. It might even be the more sensible thing.

Who knows how it’ll play out at this point. Trying to guess — with Jim Harbaugh, of all people — is a maze with no exit in sight.