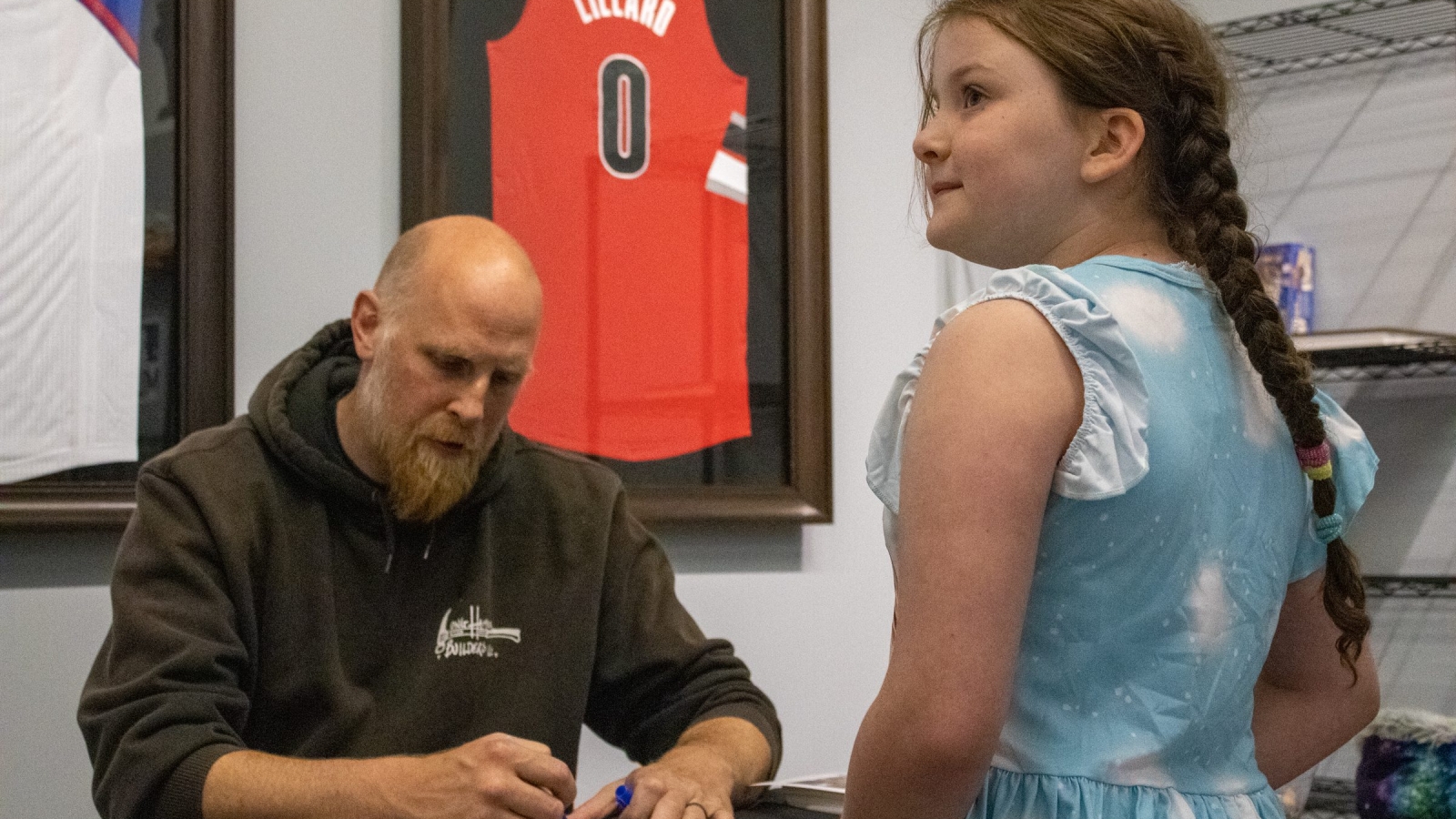 GREENVILLE — A new spot to acquire new cards is a welcome sight for the Niemiec family.

The family calls Greenville home, so Friday’s grand opening of the Man Cave Sports Cards and Collectibles new location in Greenville made for added excitement. Don’t get them wrong, they’d frequent the original store in Stanton — but this one is just a bit closer to home.

An exterior shot of the new Man Cave Sports Cards and Collectibles store at 701 Greenville West Drive in Greenville. The store is located next to the Secretary of State office and Cricket Wireless store. — DN Photo | Austin Chastain

Having a card store closer to home can help the Niemiecs pick up cards featuring their favorite players — Green Bay Packers quarterback Aaron Rodgers or Las Vegas Raiders wide receiver Davante Adams or the late Los Angeles Laker, Kobe Bryant — or other vintage cards of legendary players from memories and games gone by.

But why is this hobby so special to the Niemiecs? Just ask Deven and Nicole.

“Having a piece of history,” Deven said. “What they’ve been through, you watch records and their plays, and they’re the only one that’s been to any of them.”

“Our grandparents collected, our parents collected, so when Dev was diagnosed with cancer, he couldn’t play sports but he loves sports,” Nicole said. “He likes to follow his favorite players on the cards. … We know the guys up at Man Cave, and when they opened here it pretty exciting, so we decided to come (Friday).”

While Nicole, Deven and Jared were sorting through boxes of cards, hoping to find new treasures, Zirena was running around looking at various signed pieces memorabilia and asking for an autograph from the Man Cave’s newest co-owner, Chris Kaman.

Kaman played forward in the NBA for 13 seasons with five teams and was an All Star with the Los Angeles Clippers in 2009-2010 after leading Central Michigan University to its most recent NCAA Tournament berth in 2003 while earning All-American honors to cap off his junior year, before leaving CMU early for the NBA Draft.

As a kid, Kaman said he collected cards like it was his job. His collection slowed while he played basketball, but he worked to collect each of his own cards. Now, sports cards are his job — and he gets to share that passion with his kids.

“Someone mailed me a bunch of cards and I had thrown them in my truck, my son found them and asked, ‘Dad, is this you?’” Kaman recalled. “I was like, ‘Yeah that’s me,’ it was just kind of new for him. So he said, ‘Let’s go get these checked out.’ So I knew he’d get into it a little bit.”

Curiosity about dad’s cards led the Kamans to the Man Cave’s first store in Stanton. The two would go frequently, about once a week, and the younger Kaman would work on adding to his Pokemon and basketball card collections.

Meanwhile, the older Kaman was hanging out and building relationships with the co-owners of the Man Cave. He was there so often, they became good buddies over time.

Eventually, the Man Cave guys worked with Kaman to bring him in as part of the group to own the store. That produced further growth to a point that the Stanton location wasn’t enough. The guys decided to cash in on that growth, and put it right in the heart of Greenville.

The new store is located in the Greenville West shopping center, next to Cricket Wireless and the Secretary of State office. The original store in Stanton remains open for business as well.

“Our goal is to try and grow this a little bit and see where it takes us,” Kaman said. “We wanted to do this, it’s been in the works for a while, and finally opening day comes full circle. We’re where we wanted to be in the beginning.”

The best part about the store for Kaman is the fact he gets to share the love of collecting cards with his kids. He loves it, his kids love it.

It’s a hobby that Kaman and co-owner Dan Basom both believe is healthy for the community, especially for the kids. It also brings generations together, that’s what it’s all about.

“It’s a healthy thing for kids to do,” Kaman said. “There’s no drugs, there’s no selling sex, no violence. It’s a thing where they learn how to trade, learn how to barter and they learn how to collect things and take care of them. Just that whole aspect, it’s clean, it’s for families and it’s a thing that you can pass down to your kids.”

Kaman brought in several pieces from his own collection — he has signed jerseys from NBA players he played with and against, he has shoes from National Basketball Hall of Famer Shaquille O’Neal, a helmet signed by Pro Football Hall of Famer Randy Moss and a football signed by Hall of Fame quarterback Jim Kelly, among other signed items.

Kaman also has entire set of cards from the rookie year of National Basketball Hall of Famer Michael Jordan. Kaman is proud of his collection, which is why he brought it to the store.

“It’s just some cool stuff, some of it’s for sale some isn’t,” he said. “It’s just some things that I try to get back and put in my collection and no one else is seeing it but me, I like having other people being able to see it, as well.”

In the opening night alone, people were enjoying the collection as the store was busy to no end. The store is open from 11:30 a.m. to 5:30 p.m. Tuesdays-Fridays and 10 a.m. to 5:30 p.m. on Saturdays. More information about the stores can be found “Man Cave Sports Cards” on Facebook and Instagram.

Basom, who is an American history teacher at Central Montcalm High School, checked in on the store during lunch on Friday and his buddies said the place was buzzing with customers nonstop throughout the day. Chris Kaman signs an autograph for a fan during a signing event on Friday at Man Cave Sports Cards and Collectibles’ new Greenville location. The store opened Friday in addition to the original location in Stanton. — DN Photo | Austin Chastain

Once Basom arrived, a signing event with Kaman was just about to start and that drew in more customers. Basom’s oldest son was perusing some of the boxes of cards, one of the best parts about the job for him.

“That’s what brings a smile to my face because at the end of the day, it’s fathers and sons connecting it’s friends connecting,” Basom said. “At our trade nights, you see a lot of friendships formed with people, that’s the best part of the hobby for sure. It’s good to bring it to a larger community.”

Basom jokes that he can make a second career out of sports cards when his teaching days are over.

A retirement with sports cards? Sure, Basom welcomes it.

“This never feels like work to me,” he said. “It’s just hanging out with people and getting to sort cards, for a lot of people it’s what they do to relieve stress and just enjoy themselves. It’s good to see it turn out well here on day one.”

Bringing families and generations together one card at a time, now with a second spot in the heart of Greenville, that’s what the Man Cave is all about.