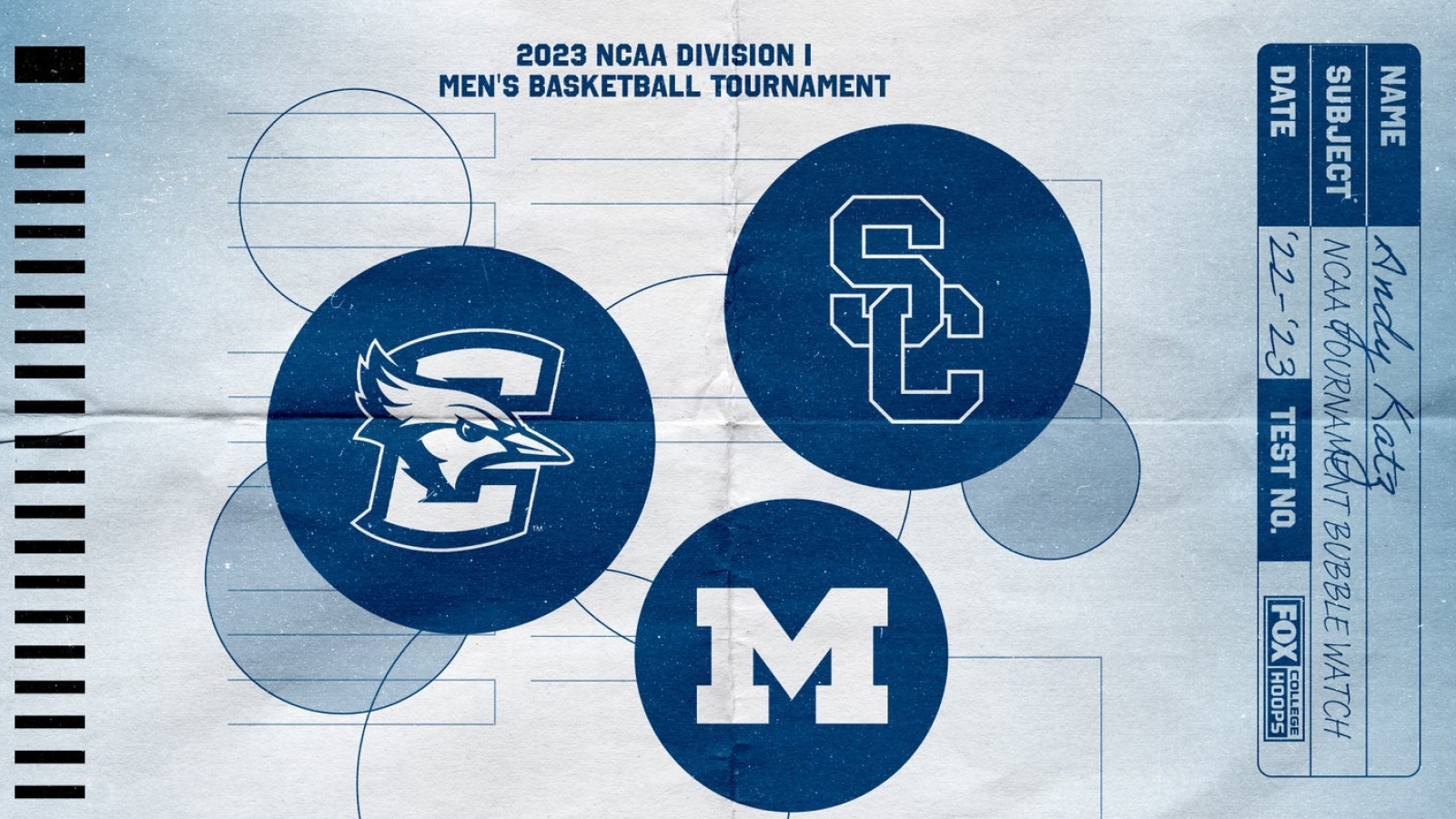 My own rule is to try not to use the bubble word before Feb. 1.

Well, we are less than 10 days away and there are plenty of teams trending toward that cut line for the NCAA Tournament.

The blue bloods once thought to be heading in the wrong direction have righted themselves. So don’t fret, there’s no reason to believe North Carolina, Duke and Kentucky won’t be in the field. The seeds may take a rollercoaster ride, and it’s not out of the question that we could end up with an historic matchup between a Kentucky and a Duke even as early as the first or second round if they ended up in a 7-10 or 8-9 game.

The list of teams that will be on the seed lines from 11 to 12, either in the field without having to go to Dayton for the First Four, or heading to the first nights of the tournament, is long. And that list is going to change weekly over the next 40-plus days.

Here is my current list, through Sunday’s games, of 20 teams that have some work to do to get into the Big Dance.

1. Boise State (15-5): The Broncos won five of their first seven games in the Mountain West and were within one possession of beating New Mexico in overtime at the Pit. Their best wins came against Texas A&M, at Saint Louis, and over Pac-12 teams Washington State and Colorado on neutral courts. The Broncos still have to play at San Diego State (Feb. 3), and New Mexico (Feb. 22) and the Aztecs (Feb. 28) at home. And they end the season at Utah State (March 4). If Boise State wants to be in the field, then going 2-2 in those four games seems like a must. Of course, the Broncos can’t lose games against the bottom of the league.

2. Creighton (11-8): The Bluejays shouldn’t be in this position, but injuries and a six-game losing skid put them in a tough spot. Creighton is healthy and should be in a position to be securely in the field. But it would help not to lose games to the bottom of the Big East. Of course, the wins over Texas Tech and Arkansas in Maui have a shelf life. The Bluejays have a five-game stretch from Feb. 11-25 that should determine their fate: UConn, at Providence, at St. John’s, Marquette and at Villanova.

3. Arizona State (15-5): The Sun Devils went from potentially being in first place in the Pac-12 to now needing to do some more work. ASU got swept at home by UCLA and USC. ASU has already lost at home to Arizona and has a loss at Texas Southern and 37-point loss at San Francisco. The Sun Devils should be fine, but the final four games of the season are going to test them. They host Utah and then go to Arizona, UCLA and USC.

4. Maryland (12-7): The Terps raced out to an 8-0 start but then lost at Wisconsin, to Tennessee in Brooklyn, and got blasted at home by UCLA. The Terps have lost four straight Big Ten road games. The good news is Maryland is home for the next three. The Terps should be in position to get a bid, but ending the season at Ohio State and Penn State could possibly put them in a position to need a win at the Big Ten Tournament.

5. Pitt (13-7): The Panthers were a first-place ACC team a few weeks ago after beating North Carolina and Virginia at home. Those two wins, as well as winning at NC State, should quell any fears. But the Panthers would do well not to completely fall flat. Pitt still has to play Miami twice, go to North Carolina, and play a tricky opponent in Florida State, which is starting to play much better and just beat the Panthers last weekend.

ACC among most competitive conference races

Andy Katz talks about the best college basketball conference races left this season, breaking them down into tiers.

6. Memphis (15-5): The Tigers must stay in the top two in the American. Temple’s win over Houston is of concern for separation, but Memphis did already beat Temple in Philadelphia. The Tigers also have a win over Auburn on a neutral court. The résumé favors Memphis as the top team out of the American not named Houston. The Tigers can quell any fears by beating Houston in one of their two matchups — Feb. 19 on the road or at home to end the season on March 5. Playing host to Temple on Feb. 12 is good, too, for a possible sweep.

7. Ohio State (11-8): The Buckeyes are only on this list because they lost five in a row, including at Nebraska and at home to Minnesota. They also missed out on some potential high-profile wins, losing to San Diego State in Maui, at Duke and vs. North Carolina in New York. The concern for Ohio State is the remaining schedule. Sure, it will be a huge help if the Buckeyes win a few, but having to go to Illinois, Indiana, Iowa, Purdue and Michigan State doesn’t give them a lot of room for error.

8. Penn State (13-6): The Nittany Lions missed out on a few chances, including vs. Virginia Tech on a neutral court, at Clemson (double-OT loss) and at Wisconsin. The Nittany Lions have a road win at Illinois and home wins over Indiana and Iowa that have them in the conversation for a bid. But Penn State could easily still play its way out, with road games at Rutgers, Purdue, Ohio State and Maryland still on the schedule. And nothing is guaranteed at Nebraska, Minnesota and Northwestern. Yes, that’s seven more road games on the slate.

9. USC (14-6): The Trojans should be fine, as the win over Auburn is a separator for them, and beating ASU in Tempe was also huge for the résumé. They nearly got UCLA at Pauley, losing by one possession. The Trojans host UCLA this week and end the season with a rugged slate of going to Colorado, Utah and hosting Arizona and Arizona State.

10. West Virginia (11-8): The Mountaineers got off to a 10-2 start, but have lost six of their last seven. The one win was massive by taking out TCU, but the Mountaineers have plenty of work to do. It helps that they play host to Auburn in the SEC/Big 12 Challenge, an opportunity they can’t let slip. The last three games will be a major test, with road games at Kansas and Iowa State, and a season-ending home game against Kansas State.

11. Nevada (15-5): The Wolf Pack had a golden chance to pick up a résumé-builder on Nov. 22, but lost to Kansas State by one in overtime. The two-point win over Boise State helps in the Mountain West. But then getting blown out by 15 at Boise didn’t advance the cause. There are three games to circle — home-and-home against New Mexico and a home game against San Diego State.

12. Utah State (16-4): The Aggies have plenty of quality wins, but don’t have one win yet against a team that can be assured will be in the field. That puts massive pressure on the Aggies to pick up a win against San Diego State — home or road — against New Mexico at home and/or Boise State.

13. Northwestern (12-5): The Wildcats have the wins at Michigan State, at Indiana and over Illinois at home. If the season ended today the Wildcats would be on the cusp of getting into the field. But they’ve lost two in a row, and a week-long COVID pause means they’ve got a jam-packed schedule over the next two weeks. They’ve got to find a way to come out of the next six games with three wins to feel like they’re still on the right track. Ending the season with three of four on the road — at Illinois, at Maryland and at Rutgers — will test this squad.

14. Oklahoma State (11-8): The Cowboys got on the radar after Saturday’s win over Iowa State. OSU is 3-4 in the Big 12. The Big 12 offers up so many chances to be an NCAA Tournament team, so, it’s way too early to rule OSU out of contention. Getting TCU, Kansas, Kansas State and Baylor in Stillwater could be a game-changer.

15. Oklahoma (11-8): I’m less bold on the Sooners after they lost to Oklahoma State. But OU has a massive opportunity to turn the narrative in its favor if the Sooners can beat Alabama in the Big 12/SEC Challenge. Getting Kansas, Kansas State and TCU at home could also alter their postseason plans.

16. Wake Forest (14-6): The Demon Deacons have the goods to get into the field, with wins over Wisconsin, Duke and Clemson. Wake just has to stay the course and not start losing to teams at the bottom of the ACC. Wake still gets NC State and North Carolina at home, but road games at Pitt, NC State and Miami could alter its fate.

17. Texas A&M (13-6): The Aggies whiffed on non-conference chances, so the work will have to be done in the SEC. Losing at Kentucky isn’t detrimental as long as Texas A&M can pluck off a few key wins. The Aggies still play Auburn, Alabama and Arkansas twice, and get Tennessee at home.

18. Utah (14-7): The Utes were on the NCAA map with the win over Arizona on Dec. 1, but Utah is still searching for a second significant win. Missing out on beating TCU at home didn’t help the cause. The Utes get UCLA and USC at home and still have to go to the Arizona schools. Winning two of those would go a long way toward earning a bid.

19. Michigan (11-8): The Wolverines missed out on all their résumé games in the non-conference, losing to Arizona State in Brooklyn, Kentucky in London, North Carolina in Charlotte and Virginia at home. The Pitt win in Brooklyn looks better now, but the loss at home to Central Michigan stings. Michigan must start beating the teams competing for the top of the Big Ten, like Purdue (home), Michigan State (home), Rutgers (road), Indiana (home and home) and Illinois (road).

Michigan star had 23 points and nine rebounds in a 60-56 win over the Golden Gophers.

20. Temple (12-9): The Owls are in the picture now after winning at Houston on Sunday. Temple had already beaten Rutgers and VCU. The Owls have won six of eight in the American. Temple still gets Houston at home and has a chance to even the Memphis series after losing the first one. Ending the season at Tulane could be a dicey situation if Temple needs that one.

Andy Katz is a longtime college basketball writer, analyst and host. He can be seen on the Big Ten Network, as well as March Madness and NCAA.com, and he hosts the podcast “March Madness 365.” Katz worked at ESPN for nearly two decades and, prior to that, in newspapers for nine years.