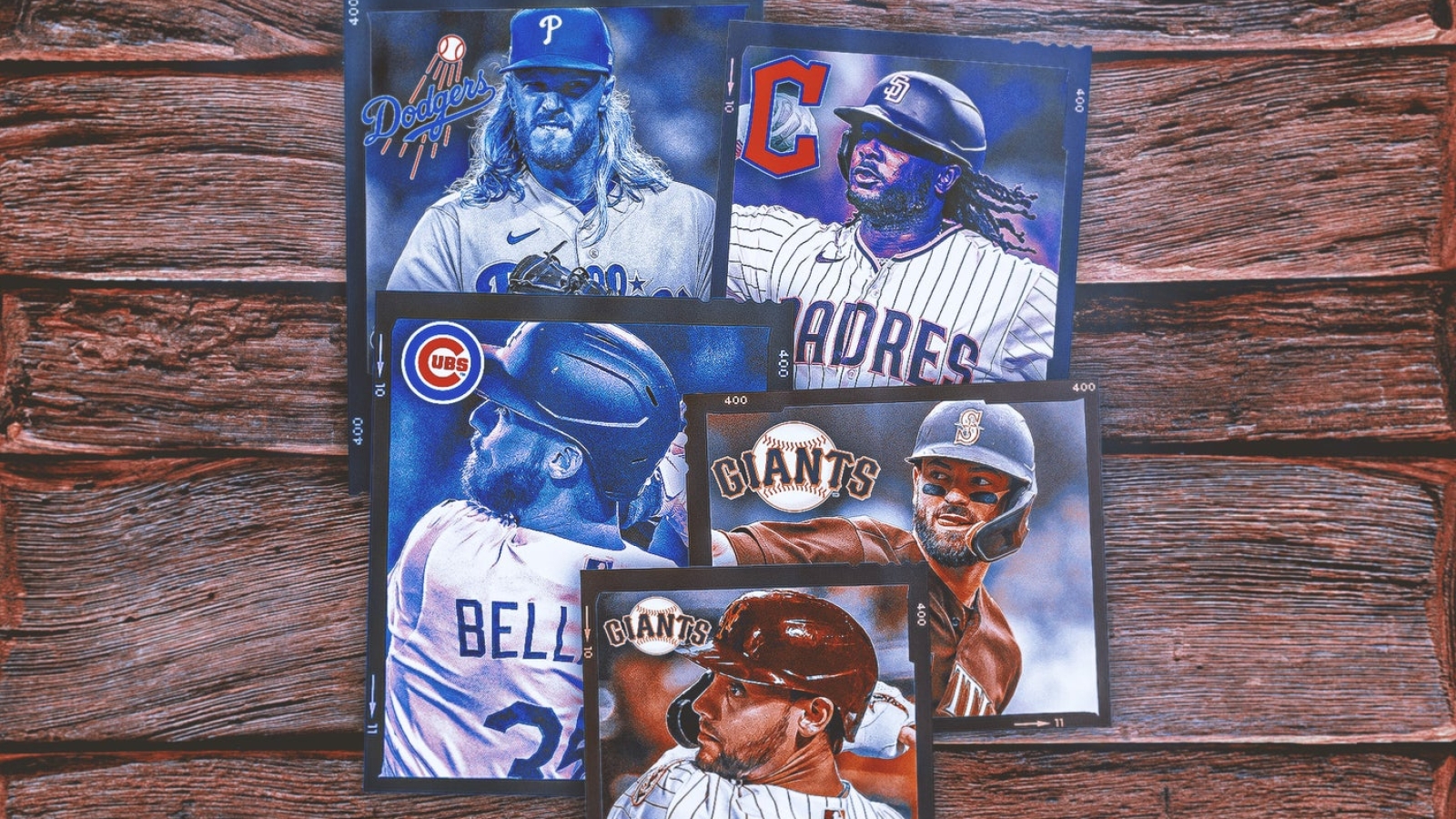 By the time the holidays rolled around, there weren’t many free-agent presents left to place in suitors’ stockings.

The top options this offseason signed their deals expeditiously. As of Thursday, 30 of the top 33 free agents (based off last season’s FanGraphs WAR totals) had already signed.

In addition, 27 of the top 30 free agents who have signed are making at least $10 million in average annual value on their new contract. Teams are taking chances on upside, often hoping a change of scenery will extract the best out of some bounce-back candidates.

Here are five free-agent signings who could rebound on new teams next season.

Note: Only players with an fWAR under 3.0 last season were considered for this list.

Bell won a Silver Slugger Award during the 2022 season, so on first glance it might seem strange to put him on such a list; but it seems fair given how his year ended with the Padres. Bell looked like a different hitter before and after his trade to San Diego.

At 29, sporting a .301/.384/.493 slash line with a 153 OPS+ through 103 games in Washington, Bell seemed like much more than a throw-in player to the Juan Soto deal for a Padres team suddenly poised to make noise. It didn’t pan out the way Bell or his new club envisioned.

Though he did have a couple memorable postseason moments — he homered in both wild-card and championship series — Bell posted a .587 OPS with three homers in 53 regular-season games for San Diego while seeing his hard-hit percentage and barrel percentage dip a bit and his average exit velocity descend considerably.

The Guardians desperately needed to add some pop to their lineup, and it wouldn’t be a shock to see the 2019 All-Star return to his 2022 first-half form. Bell also might be betting on that, taking a two-year deal for $33 million with an opt-out. The switch-hitter, who was shifted on 55.8% of the time as a left-hander, should also benefit at least slightly from the new shift rules.

Will Syndergaard be this year’s Tyler Anderson? The Dodgers have a knack for getting the best out of their pitchers, and they have a track record of success to work with in the former All-Star right-hander.

Syndergaard was more of a useful depth piece between the Angels and Phillies in 2022 than the frontline star he was in his early 20s with the Mets. He went 10-10 with a 3.94 ERA and said after the season that he felt like he was fighting himself. After suffering a setback in his Tommy John recovery in May 2021, he couldn’t regain his typical velocity in his first full season back and saw the confidence in his delivery and mechanics fluctuate.

He’s confident 2023 will yield different results and that he can get back to touching triple digits in velocity — he was throwing 97-98 mph in his bullpens prior to the setback — as difficult an endeavor as that may be at 30 years old after averaging 94.1 mph on his four-seamer last season. He signed a one-year deal in Los Angeles hoping to rebuild his value, the same way Anderson and Andrew Heaney did with their breakouts in Los Angeles this past season. Even if Syndergaard doesn’t get back to the 97.8 mph he averaged on his fastball prior to Tommy John surgery, just a slight uptick and the right pitch mix could get him looking more like himself with the Dodgers.

Is the MVP version of Bellinger still in there?

This might be the biggest question mark of any bounce-back candidate. There’s no doubting the ceiling. An MVP at 23 years old just four seasons ago, Bellinger has already demonstrated his capabilities. He mashed 47 homers and slashed .305/.406/.629 in 156 games that year.

He also hasn’t played near that level since.

The downturn started in 2020, but he was still more than serviceable offensively in that shortened season. The slide became pronounced after he hurt his shoulder in a postseason home run celebration later that year. As the injuries piled up, including a hairline fracture in his leg shortly after returning from shoulder surgery, he never regained his offensive footing. Among players with at least 300 plate appearances in 2021, Bellinger finished ahead of only Austin Hedges and Jackie Bradley Jr. in wRC+. Despite hitting nearly twice as well in 2022, last season was still a considerably below-average offensive year (78 OPS+, 83 wRC+).

At the very least, Bellinger still offers the Cubs an above-average defender at multiple positions. But they’re hoping for more than that with their one-year deal guaranteeing him $17.5 million. It’s a contract not far off from what the Dodgers would’ve had to pay Bellinger in arbitration before they decided to move on by non-tendering the 27-year-old — a move that would’ve seemed unfathomable just a couple years ago.

The addition of Haniger probably won’t ease the pain felt by Giants fans, who watched Aaron Judge re-sign in New York and Carlos Correa come minutes away from officially joining their club before everything crumbled. But if he can stay healthy, Haniger should be a valuable addition in San Francisco for the next three years.

It’s hard to put a ton of stock in Haniger’s lesser numbers in 2022, given that he played in only 57 games due to an ankle injury. The local product, who was born in Mountain View, California, went to high school in San Jose and played college ball at Cal Poly San Luis Obispo, looked forward to returning to the Bay Area after a productive stint in Seattle.

Haniger was an above-league-average hitter all five seasons with the Mariners. Even in a relatively down year last season (.246/.308/.429), he averaged the highest hard-hit percentage of his career (47.2) at 31 years old. The season prior, Haniger launched 39 home runs while playing in 157 games.

When Haniger plays a full season, he tends to produce. He was an All-Star in 2018, when he posted a career-best 139 OPS+ with 26 home runs in 157 games. His problem is staying on the field. He has appeared in more than 100 games just twice since debuting in 2016.

Another Giants outfield signing, and the first major addition after the Correa fiasco, Conforto will team with Haniger to help bolster the San Francisco outfield. Both players have a history of production — and time missed.

Considered the best-hitting outfielder left on the market when acquired in late December, Conforto hasn’t played in a game since October 2021. He was a free agent before the 2022 season but ended up missing the whole year following shoulder surgery. While there’s no guarantee he’ll return to pre-injury form (see: Bellinger), he could provide similar value to Haniger.

Conforto’s performance fluctuated in recent years. He finished with an .856 OPS in 2019, a .927 OPS in the shortened 2020 season and a .729 OPS in 2021 while missing a month with a hamstring strain. It may be tough to predict after sitting out a full year, but Conforto has never produced less than a 1.0 WAR season in his career. He has averaged an .837 OPS over his last five seasons.

It’s hard to fully judge a player in his first season back from Tommy John surgery. Yet, like Syndergaard, Clevinger did deal with a decrease in velocity and strikeout rate upon his return.

Clevinger enjoyed a solid first half in 2022 (3.50 ERA, 1.14 WHIP) and found effectiveness adding a sinker to his mix, but his productivity dropped after the All-Star break while battling through some physical issues. He didn’t need surgery after the year, but Clevinger said he received a PRP shot for his right MCL.

Prior to Tommy John, Clevinger was 41-20 with a 2.96 ERA and 10.2 strikeouts per nine innings from 2017 to 2020. FanGraphs predicts a 1.3 WAR season ahead for Clevinger, and perhaps another year can get him more closely resembling the pitcher he was in his late 20s. That would help solidify the back end of the White Sox rotation.

Rowan Kavner covers the Dodgers and NL West for FOX Sports. He previously was the Dodgers’ editor of digital and print publications. Follow him on Twitter at @RowanKavner.

Get more from Major League Baseball Follow your favorites to get information about games, news and more