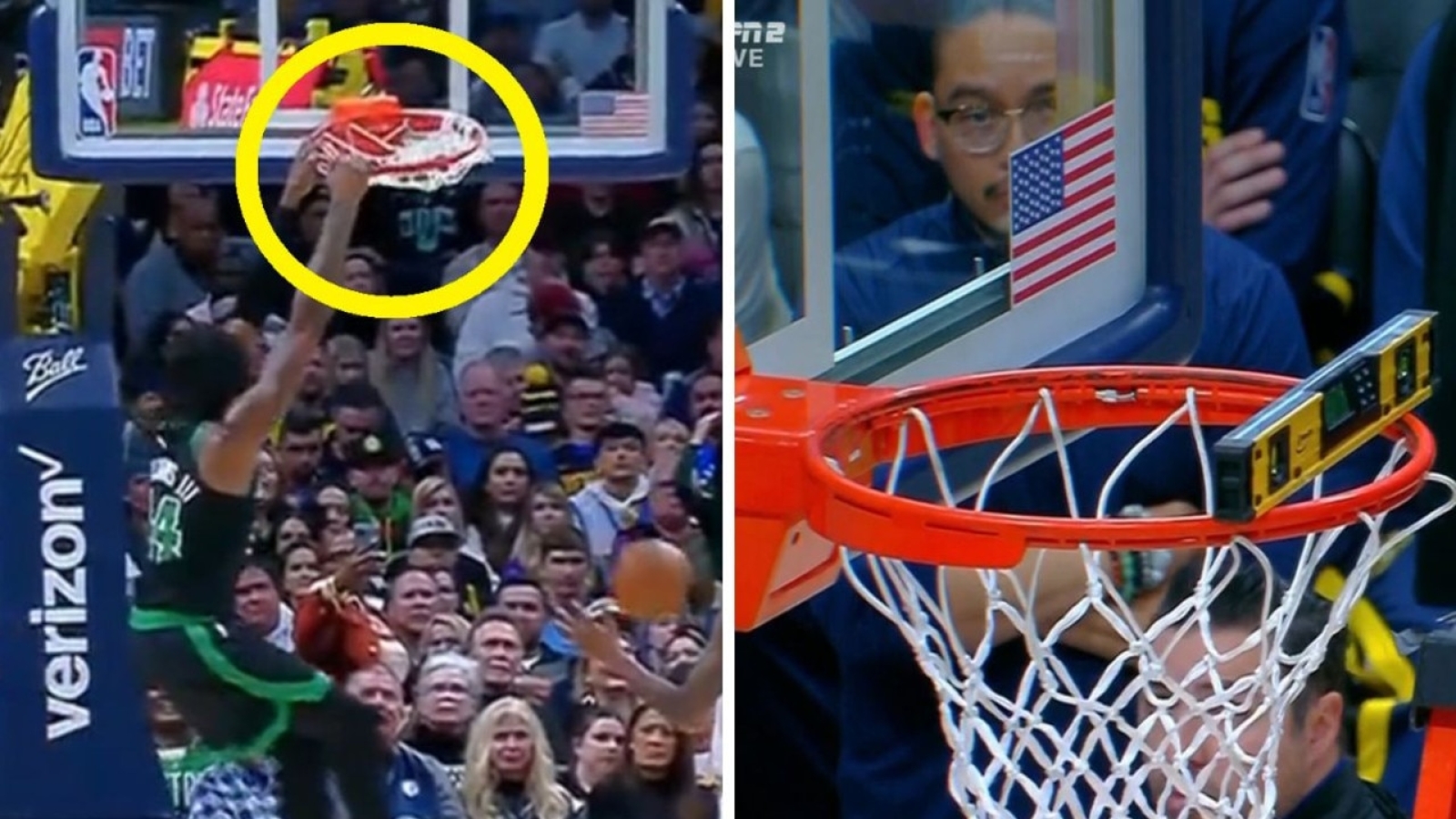 How many people does it take to fix a basketball hoop?

That was the question NBA fans were asking on Monday (AEDT) when the game between the Denver Nuggets and Boston Celtics was delayed by 40 minutes because of a crooked hoop.

It was a much-anticipated clash between the two No. 1 seeds in the western and eastern conferences approaching the halfway mark of the season.

Williams hung off the hoop with for several moments, but play continued for a couple of minutes until it was pointed out that the rim was slightly lopsided.

Two ladders were brought out onto the court and a tradie’s leveller you would usually see at a construction site was even put on top of the rim to check it was flat.

The hoop couldn’t be straightened out so after an agonising wait, a new hoop was brought out, but even there was even some difficulty keeping the replacement hoop level.

NBA hoops have been strengthened since the days of Shaquille O’Neal breaking several backboards with slam dunks and fans couldn’t believe there was such a long break in play over a relatively innocuous dunk.

Star Celtics duo Jayson Tatum and Jaylen Brown weren’t impressed with how the situation was handled.

“It was just weird,” Taytum said.

“I don’t know exactly how long we waited but nobody expected it to be that long. We got two-and-a-half minutes to warm up.”

Brown said: “They spent all that time trying to fix it but when we came back it still looked like it wasn’t even level.

“It just wasted all that time. It has an effect on the game. That’s how injuries happen. Luckily that didn’t happen but that wasn’t good.

“The whole process was handled poorly in my opinion.”

When the game eventually resumed, the Nuggets closed out a 123-11 win to keep top spot in the western conference standings.

Jokic made 10-of-13 shots from the floor, including both 3-point attempts, and went 8-for-8 from the free throw line to produce his ninth triple double of the season.

The Nuggets improved to 24-12, stretching their Western Conference lead to one game with a 10th win in 12 contests and snapping Boston’s four-game win streak.

Originally published as ‘Never seen this in the NBA’: Celtics-Nuggets delayed after hoop breaks in bizarre scenes