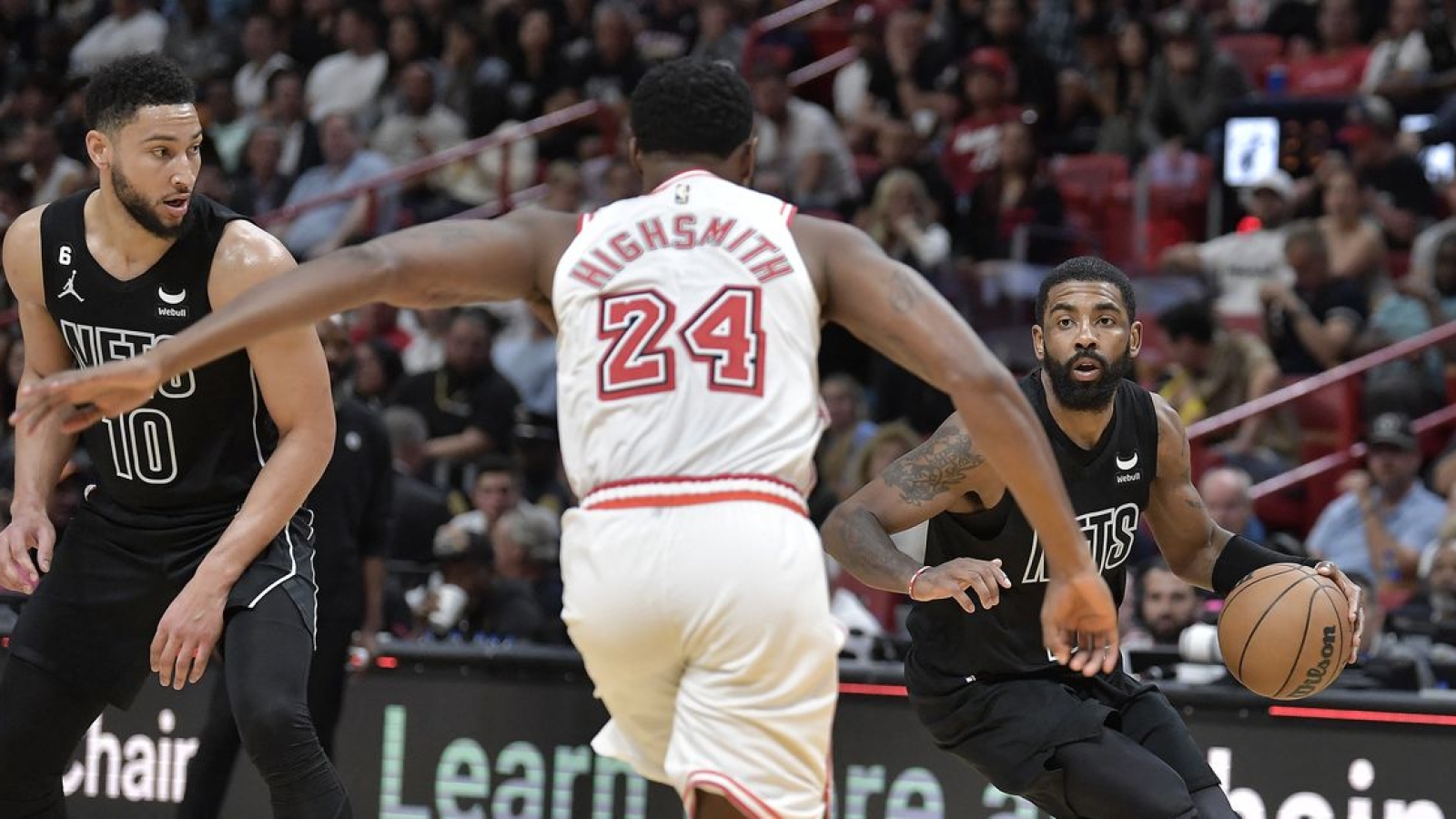 O’Neale scored the go-ahead basket on a putback with 3.2 seconds left after rebounding an Irving 3-point miss. Miami’s Jimmy Butler missed a contested drive in the lane off the backboard as time expired. The Heat wanted a foul on an O’Neale bump at the end of the play, but they didn’t get one.

Durant left in the third quarter due to a bruised right knee. He appeared to get hurt when Butler accidentally rolled onto his leg. Durant finished with 17 points, four rebounds and two assists. He entered the game averaging 30.0 points.

The Nets, who have won 14 of their past 15 games, also got 13 points, 11 rebounds and three blocks from Nic Claxton. Butler led Miami with 26 points along with eight rebounds. Tyler Herro, who returned after missing one game due to back spasms, added 24 points. Bam Adebayo was limited to 28 minutes due to a thigh injury. He finished with 10 points and eight rebounds.

James Harden delivered a triple-double with 20 points, 11 rebounds and 11 assists, Tyrese Maxey had 23 points and visiting Philadelphia rolled past Detroit.

Montrezl Harrell had 20 points and six rebounds and Paul Reed contributed 16 points and 12 rebounds off the bench for the Sixers. Georges Niang tossed in 14 points and Tobias Harris added 12 for Philadelphia, which led virtually from start to finish.

Scottie Barnes added 22 points for the Raptors, who are 1-2 halfway into a six-game homestand. Gary Trent Jr. had 19 points, Fred VanVleet had 14 points and seven assists and O.G. Anunoby contributed 14 points and four steals before fouling out.

Damian Lillard scored 34 points for the Trail Blazers, who have lost three in a row overall and seven straight on the road. Anfernee Simons added 22 points, Josh Hart had 18 points, Jusuf Nurkic had 14 points and 18 rebounds and Jerami Grant also scored 14 points for Portland.

With less than a minute remaining and the score tied at 107, Hield blocked a desperation 3-point attempt by LaMelo Ball, who was whistled for his sixth and final foul when he kicked out on Hield’s block in the hope of drawing foul shots. Instead, Hield went to the line and gave Indiana the lead for good.

Charlotte lost for the fourth time in five games. P.J. Washington led the Hornets with 22 points, Terry Rozier added 19 despite shooting just 2 of 9 from 3-point range and Mason Plumlee added 18 points and 13 rebounds.

Jaren Jackson Jr. also came up big for the Grizzlies, who were without Ja Morant because of a right thigh injury. Jackson scored 19 points, grabbed nine rebounds, blocked five shots and had three steals.

Rudy Gobert produced a double-double while D’Angelo Russell scored a team-high 22 points as Minnesota extended its winning streak to four games with a road victory over Houston.

Gobert paired 18 points with 11 rebounds and was the focal point of sublime execution in the fourth quarter, recording dunks off pick-and-rolls and second-chance opportunities. Anthony Edwards, hampered by left hip soreness, added 21 points and combined with Russell to shoot 7-for-14 on 3-pointers.

Kevin Porter Jr. led the Rockets with 25 points, but Houston shot just 11 of 36 from behind the arc en route to a ninth consecutive home loss. Jalen Green missed 11 of 15 shots while scoring nine points and Alperen Sengun had 18 points but failed to score in the second half, going 0-for-6 from the floor.

Gilgeous-Alexander was 11 of 17 from the field with five rebounds and five assists. Josh Giddey finished 2-for-4 from beyond the arc and is shooting 45.9 percent from deep over his last 12 games. Luguentz Dort added 18 points for the Thunder.

Christian Wood led the Mavericks with 27 points, going 8 of 13 from the floor. Spencer Dinwiddie added 21 points. The Mavericks were without Luka Doncic, who missed the game with left ankle soreness a night after recording a triple-double. Dallas is now 0-4 this season without Doncic in the lineup.

Mitchell made 8 of 17 shots from the floor and Garland was 7 of 12 despite entering the game with a questionable tag due to a right thumb sprain. Evan Mobley collected 14 points, eight rebounds and six assists and Jarrett Allen added 13, 12 and five, respectively.

Phoenix’s Duane Washington Jr. highlighted his 25-point performance by sinking five 3-pointers. Mikal Bridges scored 15 points and Deandre Ayton added 14 points and 11 rebounds for the short-handed Suns, who have lost a season-high six in a row and fell below .500 for the first time in 2022-23.

Trae Young scored 30 points, including eight in the final 1 minute, 16 seconds, as visiting Atlanta rallied from a double-digit, fourth-quarter deficit to defeat Los Angeles and earn a split of a four-game run through California.

De’Andre Hunter scored 20 points and Dejounte Murray added 16 as the Hawks won on the Clippers’ home court for the first time since the 2018-19 season.

Kawhi Leonard scored 29 points in a season-high 38 minutes for the Clippers, who extended their season-long losing streak to six games.