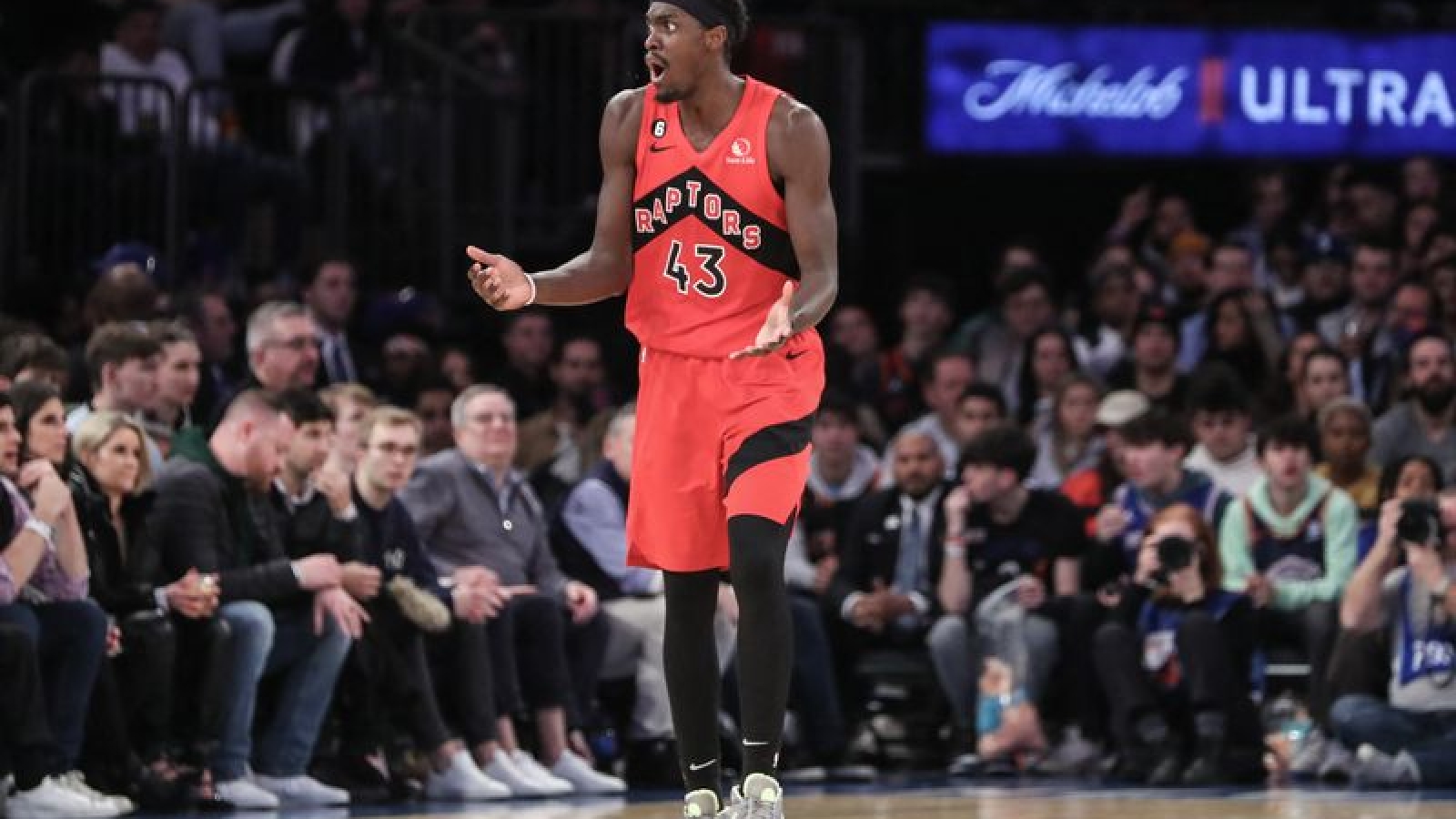 Pascal Siakam scored a career-high 52 points Wednesday night and sank the go-ahead free throw with 2:01 left for the visiting Toronto Raptors, who snapped a six-game losing streak and ended the New York Knicks’ winning streak with a 113-106 victory.

Siakam produced the eighth 50-point effort in the NBA this season. He was also the first player to score at least 50 points at Madison Square Garden since James Harden had 61 points for the Houston Rockets on Jan. 23, 2019.

Julius Randle and RJ Barrett scored 30 points apiece for the Knicks, whose eight-game winning streak was the longest active run in the NBA.

Ayo Dosunmu rebounded a missed shot and scored at the buzzer to give visiting Chicago a win over Atlanta, the Bulls’ second victory in as many nights.

The game was tied 108-108 with four seconds left. DeMar DeRozan shot an airball, but Dosunmu fielded the rebound and stuck it back for the winning points. DeRozan scored 28 points to lead Chicago, with Zach LaVine adding 22 and Nikola Vucevic getting 20 points and seven rebounds. Dosunmu scored nine.

Atlanta’s Trae Young scored 34 points, his third straight game with 30-plus points. The Hawks also got 18 points and 11 rebounds from Onyeka Okongwu, who tied the game with a basket with four seconds left. Dejounte Murray had 15 points and 10 assists.

Paul George scored 22 points to lead seven Los Angeles players in double figures as the Clippers dominated the first half en route to a win over visiting Charlotte.

Nicolas Batum scored 21 points on seven 3-pointers for Los Angeles, which led by as many as 36 in the first half. The Clippers were at full strength for the first time all season with several players returning to action, including Ivica Zubac, who had four points and eight rebounds.

LaMelo Ball led Charlotte with a triple-double — 25 points, 11 rebounds and 12 assists. Mason Plumlee added 18 points and Jalen McDaniels finished with 16 as the Hornets lost for the ninth time in 10 games.

Tobias Harris added 17 points and James Harden contributed 15 points and eight assists for the Sixers, who won their sixth in a row on a seven-game homestand.

De’Anthony Melton scored 12, Georges Niang added 11 and Montrezl Harrell had 10 for the Sixers, who continue to play without Tyrese Maxey (fractured left foot). Jaden Ivey led the Pistons with 18 points, while Killian Hayes added 12 and Saddiq Bey had 11.

A 15-0 run in the first quarter gave host Cleveland a lead it never surrendered en route to a defeat of Milwaukee.

Donovan Mitchell finished with a team-high 36 points for the Cavaliers. He got to the free-throw line for 16 attempts, making 15. Darius Garland added 23 points, while Jarrett Allen scored 19 points and grabbed eight rebounds for the Cavaliers, who earned their fifth straight win.

Milwaukee fell to 1-1 on its current, five-game road swing. Giannis Antetokounmpo had a season-high 45 points and grabbed a game-high 14 rebounds while Jrue Holiday flirted with a triple-double at nine points, nine rebounds and eight assists.

Durant made 8 of 9 shots in the opening half, when the Nets scored a team-record 91 points. It was the third-most points in a first half in NBA history. Edmond Sumner added 16 points for the game for the Nets, who played without Kyrie Irving. The star guard tweaked his right calf in the team’s walkthrough Wednesday afternoon.

James Wiseman scored a career-high 30 points for Golden State, which went 1-5 on a six-game road trip. Moses Moody and Patrick Baldwin Jr. added 17 apiece, but Jordan Poole was held to 13 as he shot 4 of 17 and missed 10 of 11 3-point tries.

Tyrese Haliburton scored 20 of his 33 points in the first half to help Indiana beat host Boston.

Haliburton shot 12 of 24 from the field, hit six 3-pointers and added eight assists and three rebounds as Indiana broke a two-game skid. The Pacers led by 28 points at halftime and held off a furious Boston comeback that included a 42-point third quarter.

Jayson Tatum scored a game-high 41 points, Jaylen Brown added 19 points and 10 rebounds and Malcolm Brogdon had 18 and seven assists as Boston fell to 0-3 on its seven-game homestand.

Banchero posted 23 points and a game-high 13 rebounds in teaming with Wagner to carry the Magic to a 3-1 road trip and its seventh win in eight games.

Kevin Porter Jr. scored 31 points and Jalen Green had 21 for the Rockets, who have dropped four consecutive games, all at home. Houston collapsed late, committing eight of its 17 turnovers in the fourth quarter.

Luka Doncic collected 25 points, 10 assists, nine rebounds and three steals to lift Dallas to a victory over Minnesota in Minneapolis.

Doncic made 8 of 16 shots from the floor after being limited to a season-low 19 points in Dallas’ 116-106 setback to Minnesota on Monday. His night was cut short in that contest after being ejected in the third quarter. Tim Hardaway Jr. and Spencer Dinwiddie each drained four 3-pointers on Wednesday to finish with 21 and 19 points, respectively.

Minnesota’s Anthony Edwards scored 23 points to fluster the Mavs for the second time in three days. Rudy Gobert recorded 19 points and 15 rebounds in his return from a three-game absence caused by to an ankle injury. The Timberwolves saw their three-game winning streak come to a halt.

Huerter led the way with 26 points, followed by Murray with 23, Fox with 22 and Barnes with 20, helping the Kings beat the Lakers for the second straight time this season.

With the Thunder down by five and just less than three minutes remaining, Gilgeous-Alexander hit a driving layup, then took the ball away from Jerami Grant before finding Josh Giddey open for a floater. The sequence began an 8-0 run to end the game.