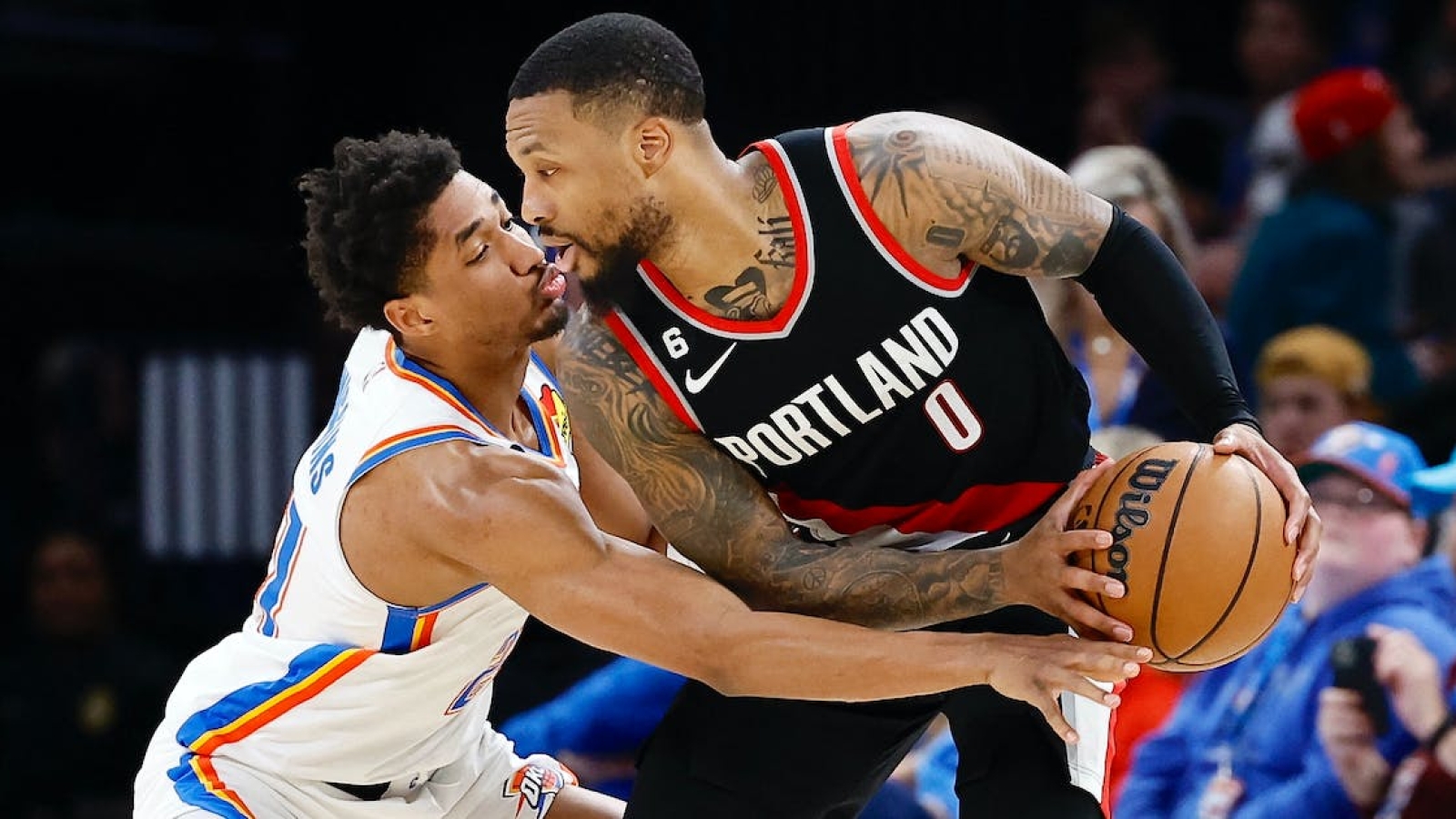 Shai Gilgeous-Alexander capped a 35-point effort by draining a 14-foot jumper at the buzzer to give the Oklahoma City Thunder a 123-121 victory over the visiting Portland Trail Blazers on Monday.

Gilgeous-Alexander caught the inbounds pass with three seconds remaining, spun to his right and then elevated over Justise Winslow, launching a floater that dropped through the net as the buzzer sounded to give the Thunder their second consecutive win.

The result spoiled the night for Trail Blazers star Damian Lillard, who became the franchise’s all-time leading scorer in the third quarter. Lillard came into the game needing 21 points to pass Clyde Drexler as the leading scorer in Portland history. He tied Drexler with a 3-pointer early in the third quarter before sinking a pair of free throws later in the frame to break the record.

Lillard finished with 28 points while Jerami Grant added 26 in the loss. No Thunder player other than Gilgeous-Alexander scored more than 13 points, but six other Oklahoma City players scored in double figures.

Donovan Mitchell scored 23 points to lead host Cleveland to a win over Utah in his first game against his former team.

Hours after being named Eastern Conference Player of the Week, Mitchell hit 8 of 12 shots, including 4 of 5 from beyond the arc, in only 23 minutes. He scored 11 points and nailed three 3-pointers in the first six minutes to help the Cavaliers establish control early. Jarrett Allen added 20 points and 11 rebounds, while Darius Garland contributed 17 points and eight assists.

Lauri Markkanen led Utah with 24 points and six rebounds in his return to Cleveland, where he played one season. The Jazz played without Kelly Olynyk, who was sidelined due to an ankle injury.

Atlanta led by 12 points with 3:05 left to play, but Orlando scored 13 straight and took the lead on a driving layup by Markelle Fultz with 3.8 seconds left. The Hawks inbounded the ball to Murray, who dribbled to the corner and was fouled by Paolo Banchero. Orlando was unable to get off a final shot before time expired.

Trae Young led the Hawks with 37 points, and he added 13 assists for his 15th double-double of the season. Orlando was led by Fultz, who finished with 24 points and nine assists. Franz Wagner scored 19 points, and Banchero had 18 points and seven assists.

Pascal Siakam led the Raptors with a season-high 38 points to go along with 15 rebounds and six assists. O.G. Anunoby returned from a four-game absence to score 13 points and reserve Chris Boucher had 13 points and 10 rebounds for the Raptors, who lost their sixth straight game.

Devin Vassell scored a game-high 26 points and Doug McDermott added 16 off the bench as San Antonio parlayed a prolific perimeter shooting display with a road victory over Houston.

Vassell and McDermott combined to shoot 16-for-28 overall and 9-for-14 on 3-point attempts to pace the Spurs. San Antonio, which ended a mini two-game losing streak, shot 55.4 percent while converting 17 of 34 3-point tries to send Houston to its third consecutive defeat.

Alperen Sengun paced the Rockets with 22 points while the starting backcourt of Jalen Green and Kevin Porter Jr. totaled 28 points while misfiring on 19 of 28 shots, including 6 of 8 3-point tries.

Brook Lopez added 30 points and former Pelican Jrue Holiday had 18 points and 11 assists. The Bucks shot 55.6 percent (45 of 81) from the floor. Jonas Valanciunas had a season-high 37 points and 18 rebounds, CJ McCollum scored 31 points and Zion Williamson had 18 for New Orleans.

Antetokounmpo scored seven points in the first minute and a half of the fourth quarter as Milwaukee opened a 107-92 lead. Williamson scored eight points and assisted on a basket by McCollum as New Orleans crept within three with 1:32 remaining, but Holiday made a 3-pointer, rebounded a Pelicans miss and fed Lopez for a layup and an eight-point lead with 1:02 remaining.

Anthony Edwards scored 27 points, collected a season-best 13 rebounds and had nine assists to help Minnesota post a victory over Dallas at Minneapolis in the first of back-to-back games between the teams.

Naz Reid contributed 27 points and 13 rebounds as the Timberwolves won their third straight contest. The latest victory came one night after Minnesota set a franchise record for points in a 150-126 rout of the Chicago Bulls. Jaylen Nowell scored 18 points off the bench for the Timberwolves.

Luka Doncic recorded 19 points, seven assists and six rebounds for the Mavericks, but had his franchise record of 36 consecutive 20-point outings halted when referee Rodney Mott ejected him with two minutes left in the third quarter. Dallas coach Jason Kidd was also ejected in the aftermath.

Chris Paul scored 28 points and dished out eight assists as Phoenix cruised to a victory over visiting Los Angeles.

Deandre Ayton had 21 points and 11 rebounds and Mikal Bridges added 20 points as the Suns won without Devin Booker, who was sidelined due to a groin injury one game after he scored 58 points against the New Orleans Pelicans.

Ball finished with 23 points and a game-high 12 assists, helping offset a 28-point, 23-rebound effort by the Kings’ Domantas Sabonis.

Gordon Hayward chipped in 19 points for the Hornets, and Nick Richards logged 14 points and a team-high 11 rebounds off the bench. Sacramento’s De’Aaron Fox was the game’s leading scorer with 37 points.