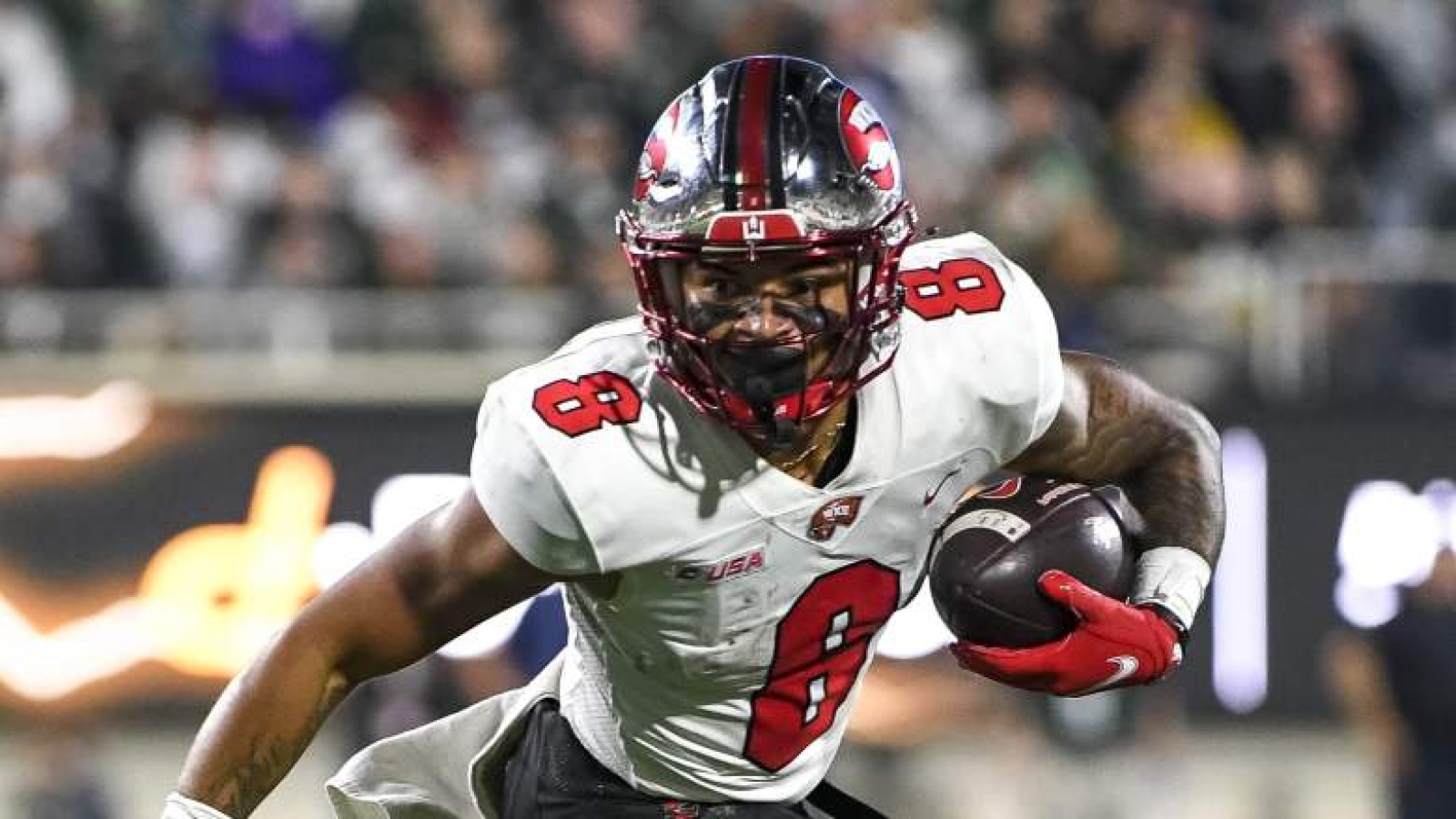 Jerreth Sterns of Western Kentucky on October 2, 2021 versus Michigan State.

The final three game stretch for the Los Angeles Rams still has the team adding to their roster.

And with their Christmas showdown on the horizon with the Denver Broncos, the Rams added some depth in the wide receiver room by signing Lance Lenoir and Jerreth Sterns to the practice squad as announced by the team on Thursday, December 22.

But of the two, the latter shares this in common with Cooper Kupp: He was his own triple crown leader.

While Kupp was shredding defenses by leading the NFL in the three major categories of receptions, receiving yards and touchdowns, Sterns was accomplishing the same thing in Bowling Green, Kentucky.

How did Sterns get to his reception number? He produced eight games of catching more than 10 passes. And that included his season-high of 17 receptions against No. 17 ranked Michigan State in the 48-31 loss on October 2.

He also delivered 10 games of surpassing the 100-yard mark and produced six games of scoring multiple touchdowns. Sterns, despite the gaudy numbers, went undrafted in the 2022 NFL Draft.

Sterns then had his first NFL taste with a legend as one of his quarterbacks. The WKU star signed on with the Tampa Bay Buccaneers on a free agent deal on May 13, 2022 — where he was on the same practice field with seven-time Super Bowl winner and NFL icon Tom Brady.

Sterns, however, was part of the waives the Bucs were required to make to fulfill the 53-man active roster obligation. He was one of 27 waives on August 30 along with fellow wide receivers Tyler Johnson, Kaylon Geiger and Deven Thompkins.

The 6-foot, 210-pound Lenoir has been a league journeyman. But his last NFL stop was with the Philadelphia Eagles.

However, his stay with the Eagles was short-lived due to an injury. To reach the 85-player limit on August 16, the Eagles waived Lenoir as part of an injury designation. Therefore, he never got the chance to join a deep wide receiving unit that features Devonta Smith and the Eagles’ draft day newcomer via trade A.J. Brown.

Before the Eagles, Lenoir played in the revamped United States Football League (USFL) with the Michigan Panthers. Per the USFL, he led the league with 52 catches for 484 receiving yards — which earned him second in the league — and scored two touchdowns. He played in the league during a time Rams practice squad quarterback Case Cookus was with the Philadelphia Stars.

Again, Lenoir has bounced around the league since his arrival as an undrafted free agent out of Western Illinois University. Before the Eagles and his USFL stop, he was with the Buffalo Bills in 2021. He had practice squad stints with the Seattle Seahawks during the 2020 season before being released on October 7.

His longest stay was with the Dallas Cowboys, who brought him in as a UDFA in 2017. Lenoir got promoted to the active roster on December 9, 2017 for his first real action in a regular season game. He then had another promotion to the active roster in the 2018-19 season when Allen Hurts was injured and had to go on IR on January 8, 2019. Lenoir was officially waived on April 21, 2020.