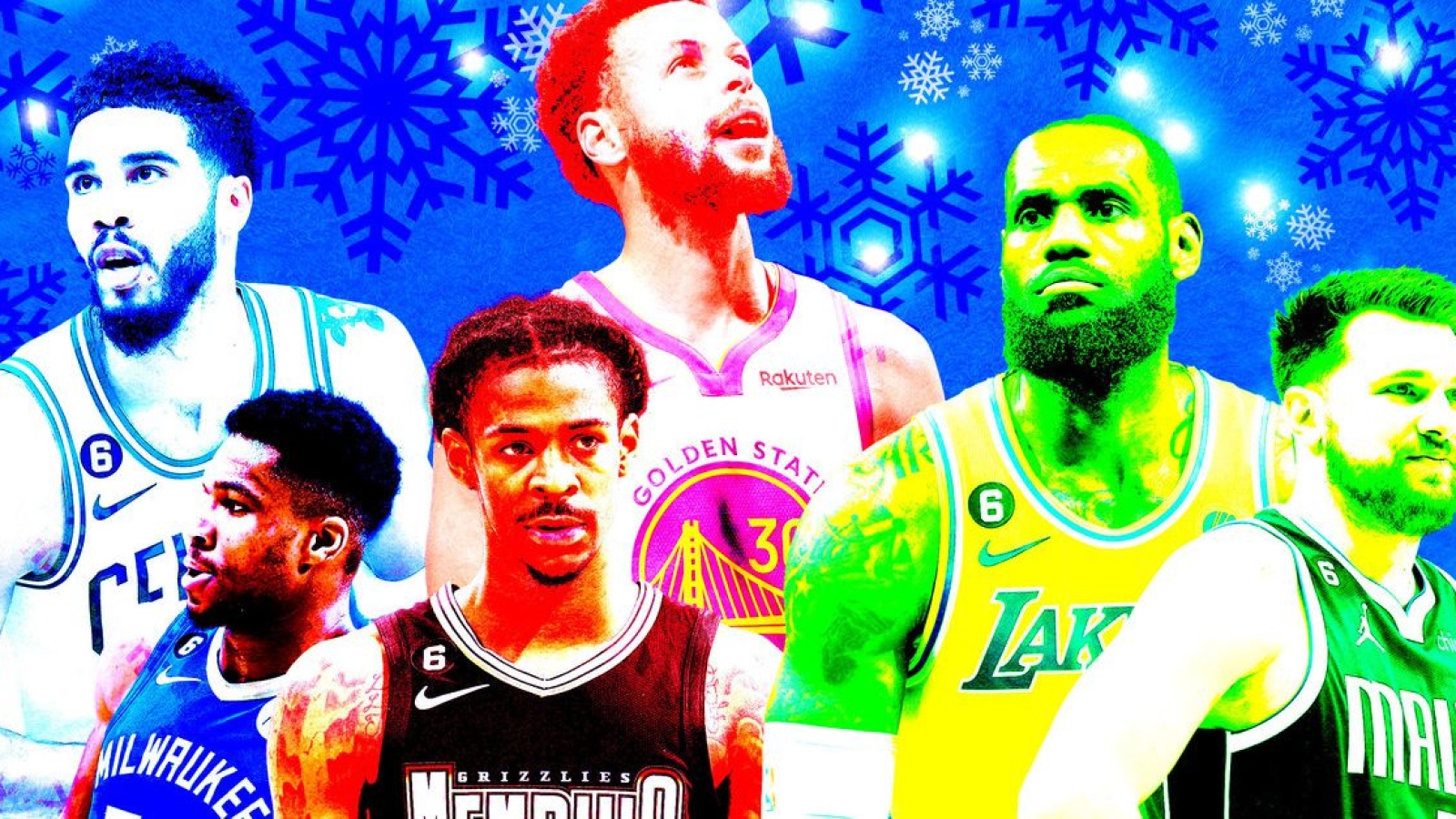 Christmas Day is a marquee event for the NBA, designed to showcase star power, preview potential playoff matchups, and ignite budding rivalries. But thanks to a couple of significant injuries and some conservative scheduling—the league didn’t know where Kevin Durant’s trade request would lead, whether Zion Williamson would be healthy, or whether the Magic would already be an unstoppable juggernaut, etc.—this year’s slate of games feels a little flat.

The story lines aren’t here, the absences of Steph Curry and Anthony Davis are deflating, and some of these games are relatively uneventful when you think about what could have been. Even the understandable toe-to-toe engagements, like LeBron vs. Luka, don’t carry any real weight, given how aggressively mediocre their respective teams have been.

Hindsight is 20-20, but Cavaliers vs. Pelicans would’ve been a blast (even knowing the schedule was released before Donovan Mitchell was traded). The Lakers should always play the Clippers (especially now that Kawhi Leonard is starting to look like Kawhi Leonard again). Doncic humiliated the Suns in dramatic fashion last year; give Phoenix a chance to return the favor.

Why not pit Nikola Jokic against Giannis Antetokounmpo? Or run back last year’s Eastern Conference finals between the Celtics and Heat? Or send Ben Simmons down to Philadelphia? Or banish the Knicks? All of those scenarios would’ve been a lot cooler.

Of course, the games could be worse. (The Bulls could be involved.) But it’d be nice if some were a little less random, too. Here’s how I’d rank this year’s holiday slate by entertainment value.

Apologies for the cheap shot above: The Knicks might actually be good! Their net rating in December ranks second in the league at plus-11.4, spearheaded by shutdown defense, terrific rebounding (shout-out to playing Jericho Sims and Isaiah Hartenstein at the same damn time), and what has somewhat shockingly been the most dominant starting five in basketball: Julius Randle, Mitchell Robinson, Quentin Grimes, Jalen Brunson, and RJ Barrett have obliterated whatever stands in front of them.

New York’s recent eight-game winning streak coincided with Tom Thibodeau’s decision to remove Derrick Rose and Cam Reddish from the rotation (the plug was mercifully pulled on Evan Fournier long before that) after an embarrassing 21-point home loss to the Mavericks earlier this month.

Long story short, the Knicks sporting a competitive squad on Christmas Day is the Christmas miracle NBA fans should not take for granted. With so much clicking (and some serious 3-point luck on their side), New York hosts Joel Embiid’s Sixers, an Atlantic division rival that’s also blitzed their way through December.

Tyrese Maxey remains out, but James Harden is back to his playmaking wizardry. Tobias Harris is hitting just about every 3 he takes. And Embiid is once again looking like an unstoppable MVP candidate.

But even though both these teams are competitive and defending at an extremely high level, there’s still fairly little to sink your teeth into. The Knicks have no star power and are punching above their weight. Why are these two teams playing each other? There’s no clear justification beyond East Coast bias and the NBA’s desire to force-feed its most dysfunctional franchise down America’s throat every year.

Watching one of the slowest teams in the league square off against a team that has no All-Star just isn’t very appealing. Especially when you have to watch it live and can’t fast-forward through all of Embiid’s free throws. This is Christmas Day, not a Tuesday night on League Pass.

Luka and LeBron are billion-watt luminaries. Watching them play basketball at the same time on the same court is special, even if they’re at two very different stages of their careers.

This no longer feels like the passing of a torch. Doncic is clearly superior, a first-team All-NBA lock who’s dragging a depleted and deficient Mavericks roster farther than perhaps anybody else could. Meanwhile, LeBron is no longer the best player in the world. He might not even be in the top 10. But he’s still awe-inspiring, a few days short of his 38th birthday; the percentage of his shots that are dunks is just 0.2 percentage points short of his career average. That doesn’t compute.

This one-on-one matchup could be intriguing, especially for the handful of possessions they actually go at each other. Unfortunately, the supporting casts are … borderline anonymous. Anybody pumped for a Dennis Schröder–Damian Jones pick-and-roll? How about some random Max Christie minutes spliced with a wedge of Kendrick Nunn? May I interest you in the Return of Kemba Walker? How about JaVale McGee? Did you even know he was on the Mavs? Anybody? Hello?

Stylistically, against a Lakers defense that won’t have Davis and may need to pack the paint, expect a steady diet of open corner 3s from the offense that gets more up than any other. It’s an uninterested transition offense vs. apathetic transition defense. What a gift.

Nikola Jokic is playing, which means you need to tune in. Every possession that sees him touch the ball is an unwrapped present. The idiosyncratic vision. The deftly powerful post moves. The 3s he’s finally starting to take (and make!). Jokic is the sport’s best player, a delightful expert on angles, advantages, and widespread basketball generosity. The NBA’s own Santa Claus.

There’s a real chance the official campaign for Jokic’s third-straight MVP award is announced on Christmas Day, in front of a national audience, coming off several eye-popping performances (including a Wilt Chamberlain–esque 40-27-10 game) that make him a real force in those conversations. Again: Nobody is better at basketball.

On the other side, it’s too soon to call the Suns a hopeless mess, but they don’t exactly look like a contender. Tuesday night’s home loss against a Wizards team that was on the verge of dropping 11 in a row had several built-in excuses: Devin Booker didn’t play, it was on the second night of a back-to-back, etc. But none of that should matter! Landry Shamet hit nine 3s. Deandre Ayton had 30 points and 13 rebounds. Chris Paul played 36 minutes. The Suns led by 10 with six minutes left in the game. Win it.

But of course there are deeper issues. Monty Williams and Mikal Bridges got into it with Ayton during that Wizards loss. Jae Crowder’s trade demand, Cam Johnson’s injury, and Paul’s reluctance to shoot don’t help.

Watch Paul reject this screen, get a step on Bradley Beal, and then not even glance at the rim as he approaches it:

Anyway, the Nuggets and Suns seem like two teams heading in opposite directions. If Booker’s sore groin keeps him out of action, it could be over before it starts.

Steph Curry is out, but there’s still plenty of reasons to watch, namely the bad blood between these two contenders. It’s the aging dynasty vs. a pack of brash up-and-comers. When the Warriors won last year’s title, Klay Thompson called Jaren Jackson Jr. a “freaking bum” for using Golden State’s “Strength in Numbers” slogan in a tweet. Gary Payton II is gone but Dillon Brooks is still here. Draymond Green is a natural instigator. Remember when Jordan Poole touched Ja Morant’s knee and it was a 24-hour controversy?

Speaking of, the real reason this game ranks so high is Morant. He does things on a basketball court that will spark conversation for the rest of your life. Put his team against the Austin Peay Governors and I will sit down in front of my television without blinking, giddy, for 2.5 hours.

Morant is not alone in making the Grizzlies so enjoyable. Jackson’s 11.7 percent block rate is currently, um, the highest in NBA history? During one sequence in Memphis’s Tuesday night loss in Denver, Bones Hyland said “thanks, but no thanks” to testing JJJ after an earlier layup was rejected. This is intimidation in real time:

This game has significant blowout potential (which isn’t great) even with Desmond Bane remaining on the sideline. It could also be tight, if Kevon Looney keeps Steven Adams in check on the glass and Golden State’s offense is a bit more deliberate and careful with the ball. Poole is a flawed player, but he can also score 17 points in 45 seconds.

If Curry were healthy, this would be far and away the no. 1 Christmas Day game, but since he’s not …

Finally, a game worthy of a holiday showcase. Stakes. Superstars. History. It’s Milwaukee and Boston’s first collision since last year’s second-round battle, a sadistic seven-game classic that carried the weight of a Finals series. There were buzzer-beaters, reputation-building performances (Jayson Tatum’s masterful Game 6), brilliant defensive plays (Jrue Holiday at the end of Game 5), and a harsh degree of physicality that made your body ache every time Grant Williams tried to draw a charge.

Rivalries are stunted in today’s NBA—mostly thanks to the constant churn of player movement and free agency—but this one has actual old-school staying power. These are two of the top teams in the Eastern Conference, and, despite a few ugly recent losses, maybe the entire league. Tatum and Giannis Antetokounmpo are perennial MVP candidates. Jaylen Brown and Khris Middleton are indispensable All-Star sidekicks. Marcus Smart and Holiday are smashing fists who moonlight as point guards.

Their styles clash, too. The Bucks are rigid and enjoy a good rock fight. The Celtics love their switch-everything versatility and, despite an ongoing slump from deep, are still explosive. Most teams have zero players who can keep Giannis from dunking them into oblivion, but Boston has multiple options to throw his way. A lot of basketball is left, but this could and should be a preview of the Eastern Conference finals. It’s a teeth-rattling matchup.