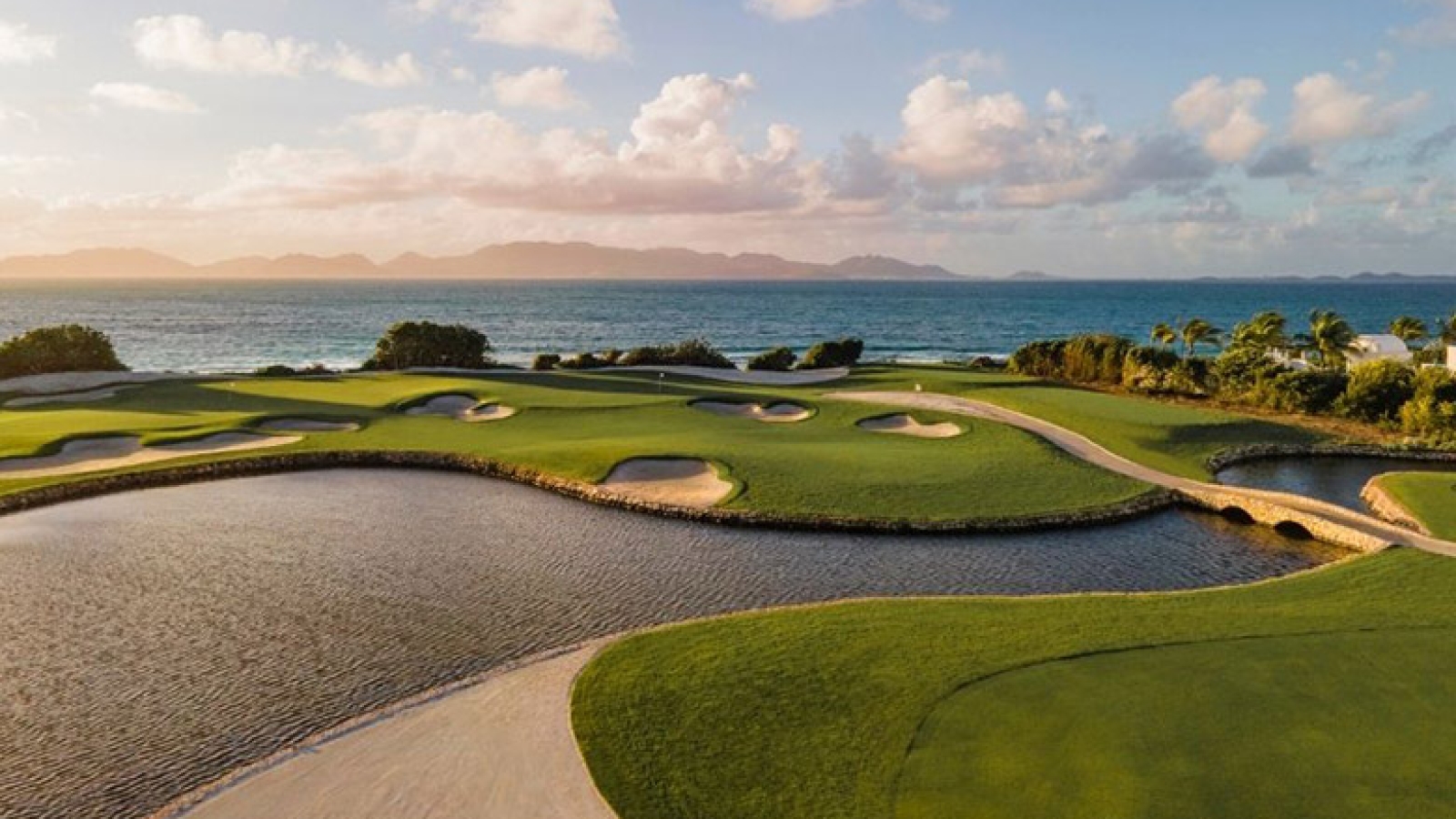 Even billionaires have bucket lists. Richard M. Schulze, founder of retail giant Best Buy, wants the International Course at his Aurora Anguilla Beach Resort & Golf Club to achieve Top 100 status in the next two years. One way to achieve that goal, Schulze figured shortly after he acquired the 300-acre Caribbean resort, was to build a short course.

A keen observer of such revered places as Augusta National Golf Club and Pebble Beach Resort (where he was among 110 owners until three years ago), Schulze knows that short courses – par-3 courses and layouts in general less than 18 holes and holes no greater than 300 yards – are a growing common denominator among the world’s elite courses.

Schulze acquired the former CuisinArt Resort in December 2020 from the estate of Conair Co.

Basically unwanted and unkept by Rizzuto’s heirs, Schulze saw unlimited potential among the overgrown brush and trees that grew unchecked on the property and blocked views of the blue/green waters of Rendezvous Bay on Anguilla’s southwest side.

In early 2021, on a private plane flight with golf star Greg Norman to look over the latter’s original layout of the International Course, which opened as Temenos Golf Club in 2006, Schulze popped the question about a short course along a 19-acre piece of land between the International’s sixth and seventh holes.

Thus began, for all practical purposes, the story of two golf courses – the renovated Norman Signature International and the new Avalon Links short course – each being rebuilt and built, respectively at essentially the same time as the world was recovering from the Covid pandemic.

A pure walking course, players can carry their bags or use pull carts. There are no powered golf cars.

“We‘re pulling a cart or carrying a bag. That’s really the way the game was made to be played,’’ said Schulze. “I’m excited to be able to play just that way.’’

The name “Avalon Links,’’  Schulze said, was chosen to represent a place to rest and rejuvenate.

“Avalon is the king’s playground,’’ he said.

As much as Avalon Links – and Aurora – is a playground, Schulze  wants them to be so much more. Enter the Schulze Family Foundation, which has donated hundreds of millions of dollars to medical, education and human services, primarily in Minnesota and Southwest Florida, since its beginning in 2004.

Schulze wants to do the same for the citizens of Anguilla, more than 560 of whom work at Aurora Beach Resort & Golf Club, which is managed by Sheila Johnson’s Salamander Hotels & Resorts.

“The secret sauce (at the resort) is our people,’’ said Schulze, an energetic and approachable 81-year-old billionaire. “I just love every one of them.’’

It only takes a few minutes at the 380-acre resort on Anguilla’s southwest side to know why Schulze feels the way he does about his employees. And it’s those employees and feelings that has inspired him to give back to the island that sits approximately 200 miles east of Puerto Rico.

The Foundation also is working to upgrade the island’s hospital facility, which was severely damaged during Hurricane Irma in 2017.

“I’m a big believer in giving back and doing the right thing for the community,’’ Schulze said. “I’m hopeful that all these steps that we take as a company and ownership plays a bit off everybody else who is here and says, ‘Step up and do your part to make the community better.’’’

Steve Pike is an award-winning golf writer and author who helped define golf business reporting in the early 1990s as the first Golf Business Editor for Golfweek magazine and later at Golf World and Golf Shop Operations magazines for Golf Digest. Pike further pioneered this genre at the PGA of America and Time Warner as the golf business writer and editor for PGA.com. He started in newspapers more than 25 years ago and has covered all sports including Major League Baseball, the NFL, NHL, NBA, as well as beat writer for nationally ranked collegiate baseball and basketball teams. As a travel and golf writer, “Spike” has climbed volcanoes in the Canary Islands, ascended the Great Wall of China, teed off in the Austrian Alps, and shared single-malt scotch with Sir Michael Bonallack at the Royal & Ancient Golf Club of St. Andrews, Scotland. A die-hard baseball fan, Pike named his son Zachary Seaver after his childhood hero, New York Mets pitcher Tom Seaver. Pike lives with Zachary, daughter Keilly, and wife Brenda (an ovarian cancer survivor, trained journalist, master teacher, and an active member of the DAR) in the South Florida village of Wellington.