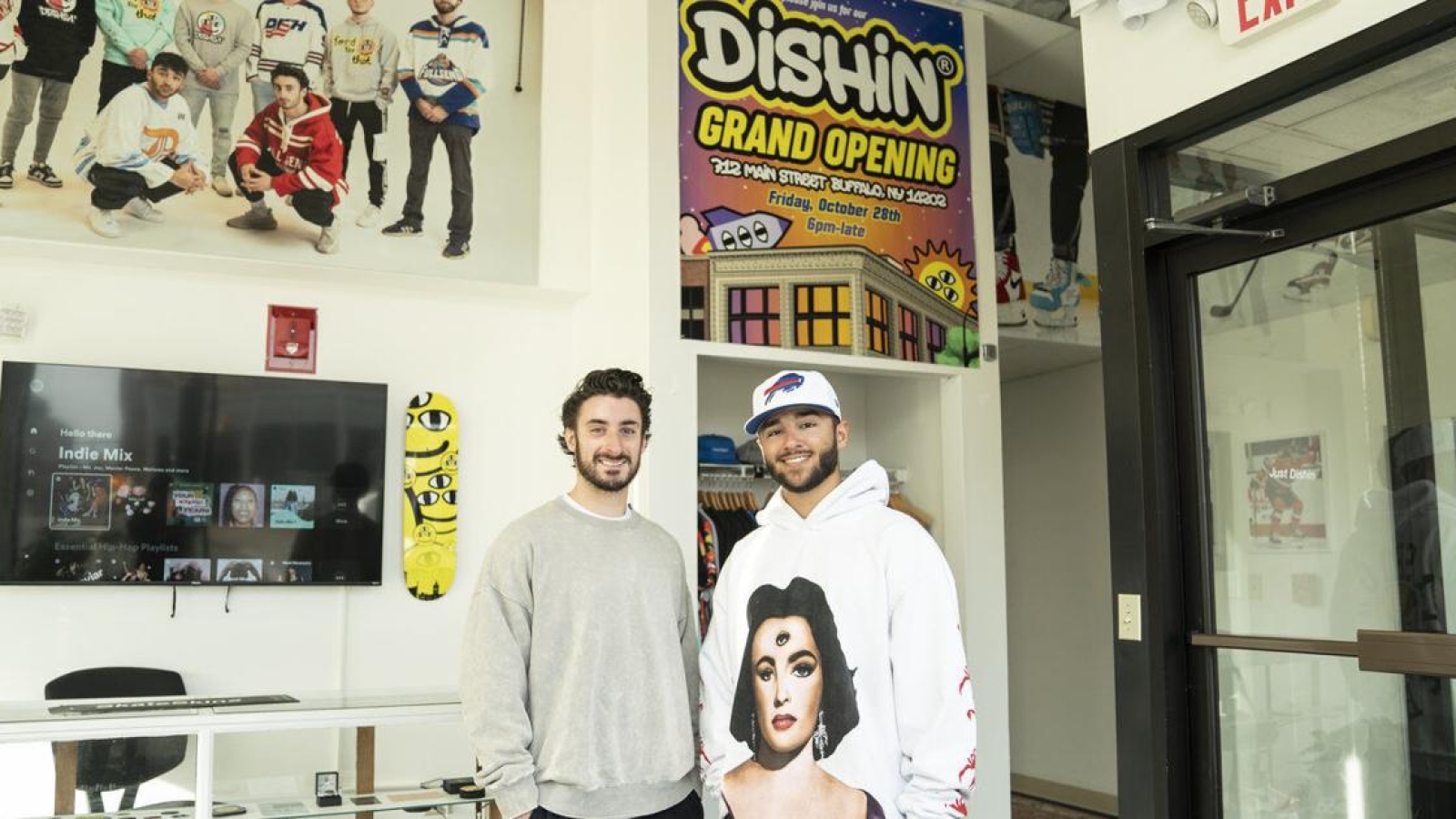 After being laid off at graphic design business, Keeler uses opportunity to pursue Just Dishin

Hockey is not exactly a sport that typically puts creative expression on display.

That’s where Matthew Keeler is trying to make some headway with his Buffalo-based, hockey-focused fashion and merchandise brand, Just Dishin.

Keeler has been looking to bring a new element of creativity to the sport with customized equipment and apparel and by building relationships with some of hockey’s biggest stars.

Keeler said he’s modeling his business with elements from some of the more forward-thinking leagues, like the NBA and NFL, and using his most popular selling product – Skate Skins, skate fashion for athletes – to change the way hockey is perceived.

The company has 26,000 followers on Instagram, relationships across the NHL and a growing market for Skate Skins, which they also make for college, high school and juniors programs.

“We’re working with players looking to just break out of this traditionalist norm that the game might feel stuck in, at times,” said Keeler, who, along with business partner Nick Ciavarella, went full time with Just Dishin in April 2020 and then opened a Buffalo storefront in October.

It took being laid off from his position with a local graphic design company at the outset of the pandemic to spark him into moving forward with a business originally created in 2012.

Skate Skins, graphics that can be applied to the side of a skate and pulled on and off, was invented during the Covid-19 pandemic after Keeler went full time with Just Dishin in April 2020.

Since ice rinks were closed, Keeler, who graduated from St. John Fisher College with a business degree, had to be creative in developing and testing the product. He put the material used for Skate Skins in his freezer and underwater in his bathtub to test their durability.

“I had this drive to come up with a product that could be customizable for all players and easy to install, remove and reapply,” he said.

He’s now working with players in the NHL, as well as the Buffalo Beauts. The first Skate Skins were made last season for Phoenix Coyotes’ Loui Eriksson to commemorate his 1,000th game in the league.

Keeler has also worked with the likes of Toronto Maple Leafs center Auston Matthews, Arizona Coyotes forward Clayton Keller and the Las Vegas Golden Knights’ Jack Eichel. His product can be seen on the studio backdrop of ESPN hockey show “The Point,” as well.

More recently, he designed throwback Sabres Goathead Skate Skins that Dahlin plans to wear as an ode to the teams of the ’90s and early-2000s. These Skate Skins also feature photos of former Sabres icons Chris Drury, Daniel Briere and Dominik Hasek.

Skate Skins can be worn in most leagues during games, but not in the NHL. Keeler is hoping to get that changed.

He has also been creating relationships in other sports – breaking Just Dishin out of just being a hockey brand – and growing the company’s player portfolio. Keeler has worked on manufacturing items for Buffalo Bills’ Dion Dawkins, Josh Allen and Khalil Shakir.

“Our brand is something that operates different every day, and we’re slowly starting to break out into everyday sport and fashion,” he said.

The shop at 712 Main St. features a retail area, production rooms and offices – a far cry from working out of Keeler’s apartment. Having the store has allowed Keeler and Ciavarella to expand some for their retail offerings and product drops. Down the line, the location will also host watch parties, autograph signings and live podcasts.

“It allows our brand to have a front-facing value and visual aspect so people can come in and see what we’re doing,” Keeler said. “For us to bring in players and allow them to see where we do everything by hand and the large printer we use, it’s pretty eye opening for them.”

After a record-breaking first year for New York’s sports betting industry, the state is once again projected to be on top in the U.S. for total handle next year. Just not at the heights reached in 2022.

PlayNY, an online gaming, sports betting, lottery and casino news provider, projects the state next year to have a $13.9 billion handle, with $1.04 billion in gross gaming revenue, creating $530.9 million in state tax revenue. So far, this year, the state has seen $16.1 billion in handle, generating $626 million in tax revenue. That includes posting $8 billion through October.

The $13.9 billion in estimated handle ranks first among sports betting projections for next year by almost $4 billion, with Illinois coming in next at $9.9 billion, and then New Jersey ($9.8 billion) and Nevada ($8.7 billion).

Welcome to Buffalo Next. This newsletter from The Buffalo News will bring you the latest coverage on the changing Buffalo Niagara economy – from real estate to health care to startups. Read more at BuffaloNext.com.

Catch up on the latest news from the Buffalo Niagara economy:

Legal marijuana sales launched in the state Thursday, but not in Western New York due to a lawsuit that led to an injunction pausing sales here.

World Central Kitchen is back to help feed Buffalo’s East Side in response to the blizzard that shut down the city for nearly a week.

Wells Enterprises will eliminate 183 jobs at its Dunkirk plant, which is less than the 319 employees the company previously planned to lay off.

A three-year deal reached ensures Highmark members will continue to have in-network access to care at Catholic Health’s facilities.

Athenex is closing its Newstead manufacturing plant and laying off all 92 employees as of March 17.

Preliminary efforts are underway to prepare for the third phase of the project to redevelop the Northland complex in Buffalo.

The state is looking for ideas to redevelop a prison that closed last year in Gowanda.

The federal funding needed to get a tech hub program off the ground has been included in a year-end spending bill before Congress.

Cost vs. Benefits: That’s the trade-off at the center of the state’s proposed climate change plan.

A development agency is hiring a consultant to come up with ways to improve the infrastructure linking Canalside and the redesigned Centennial Park.

The Buffalo Niagara region’s sluggish hiring is being driven by a shortage of workers, and local officials are starting to look for ways to ease the crunch.

Big changes are coming to the state’s energy markets after a plan to reduce harmful emissions was approved by an advisory panel.

A South Buffalo pot farm will be able to grow a lot of legal marijuana once it opens, with an estimated value of $19 million a year.

David Balkin is out as president of SUNY – Erie Community College following a probe into an alleged altercation with a staff member.

A Buffalo contractor has a plan to build 40 apartments and retail space near the intersection of Elmwood Avenue and West Tupper Street.

After a video went viral, the state Health Department is looking into staffing levels at an Erie County Medical Center psychiatric unit.

Five reads from Buffalo Next:

1.The Bills make me want to shop: How Buffalo Bills merchandise is some of the hottest local gift items this holiday season.

2. How will Western New York’s higher education institutions recover from Covid-19? Enrollment at some local schools is holding up, but others are struggling to attract students.

3. New life for old stones: How a Buffalo company is finding new uses for old bricks and stones in construction projects.

4. Big changes are being proposed for the state’s energy markets, and it could change the way residents heat their homes and cook their food in the years to come.

5. Nurses have been hard to hire for a while, so People Inc. has launched a program to train its own workers by helping to pay for tuition and rearranging work schedules to ease the burden of going back to school.

The Buffalo Next team gives you the big picture on the region’s economic revitalization. Email tips to buffalonext@buffnews.com or reach Deputy Business Editor David Robinson at 716-849-4435.

Was this email forwarded to you? Sign up to get the latest in your inbox five days a week.

Must-read local business coverage that exposes the trends, connects the dots and contextualizes the impact to Buffalo’s economy.