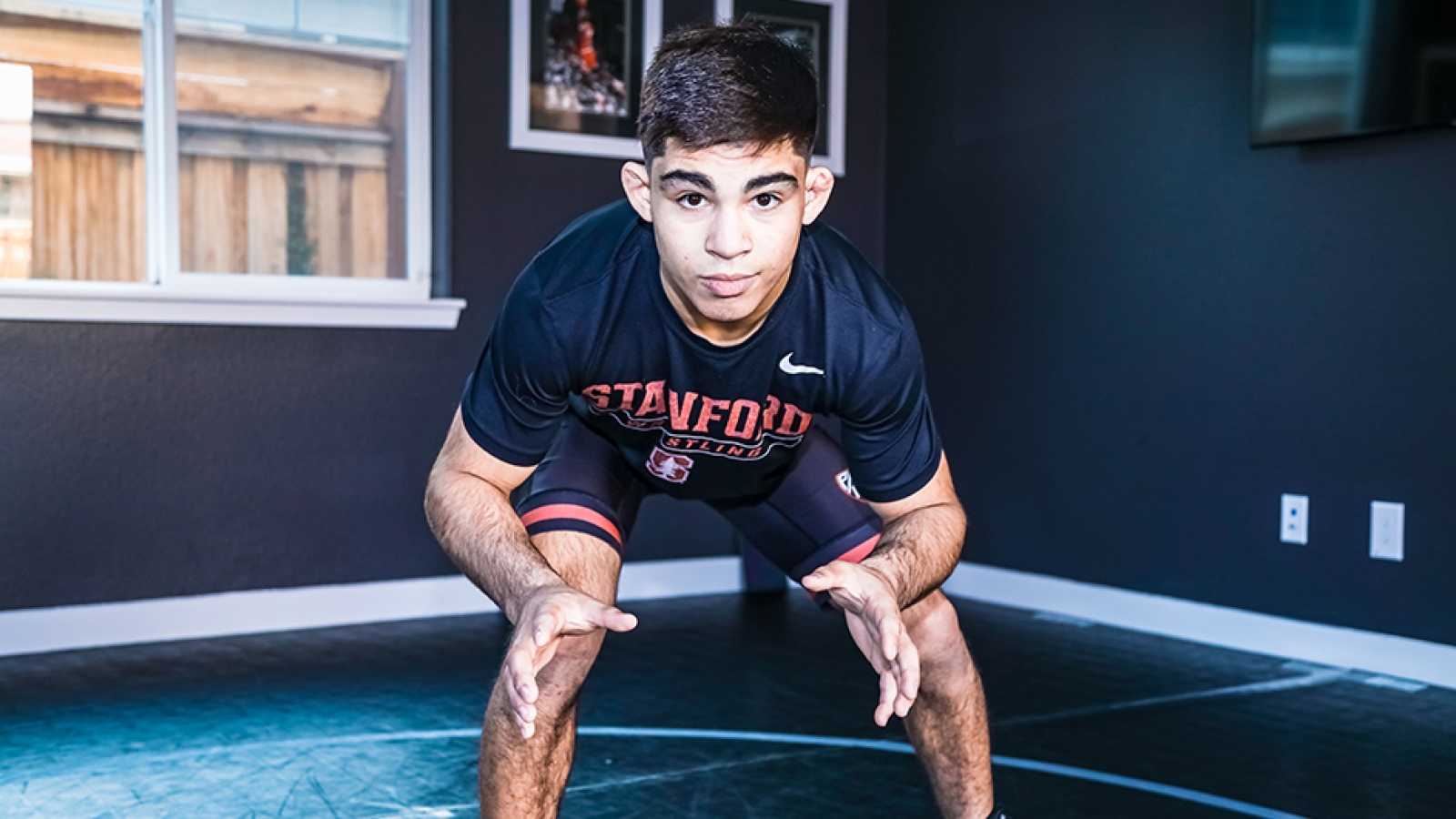 Joel Valencia doesn’t get impressed by too many things, but even he was amazed by what his son Aden did when the Sobrato High junior won the Reno Tournament of Champions (TOC) on Dec. 18.

In the college division.

In an incredible performance, Valencia won the 133-pound college division, knocking off a NCAA All-American in the process.

“I was pretty fired up,” Aden said. “It felt good, especially coming off the injury and not having a lot of success last year. To be able to come back and have a good couple of months of training to prepare and go impose my will, it felt great.”

In an interview with FloWrestling after Valencia beat Indiana’s Henry Porter 2-0 in the championship match, Aden said his dad told him he had exceeded his expectations. Even though Aden has trained and gone live with college wrestlers for several years, winning the Reno TOC college division represented a glimpse into Valencia’s future.

The Stanford-commit has several goals, including winning NCAA championships in the future. If that ends up happening, Reno was the harbinger. Valencia won his opening match in dominating fashion, earning a 10-2 major decision.

But the stunner—at least from most wrestling observers—came in the next round when Valencia beat Michigan State All-American RayVon Foley, 8-3. Foley happened to be the top seed and Valencia parlayed that victory with a 15-3 major decision in the quarterfinals.

That set up a semifinal showdown with No. 4 seed Reece Witcraft of Oklahoma State. Valencia trailed 2-1 with about a minute left in the third and final period before he turned Witcraft on his back and eventually earned six points. Valencia released Witcraft before taking him down again to put an exclamation point on the victory.

In the final, Valencia scored an impressive 2-0 victory over No. 3 seed Porter, the former Gilroy High standout. Valencia scored one point for two minutes of riding time and another point for an escape. His takedown defense was superb, but it was his ability to score a point via riding time that stood out.

High school wrestling doesn’t award points based on riding time, but it’s a crucial facet at the college level. Matches are often decided on ride time, and Valencia controlled the mat against Porter.

“He’s a formidable athlete and I think he’ll be All-American this year, so it was cool to beat a guy like that,” Valencia said.

In going 5-0 in Reno, Valencia displayed his entire tool set of skills: takedowns, ride time, mat position, takedown defense, stamina, mental toughness and the awareness to execute specific moves and techniques at the most opportune times.

Valencia had ample reason to feel enthralled with the result. Since December 2021 through last summer, Valencia battled a hamstring injury in both legs, which took him out of some prestigious tournaments. In that time period, Valencia went through a vicious cycle in which he would go from rest to reinjuring his hamstring over and over again.

It wasn’t until October when Valencia was fully healed.

“I obviously returned much sooner than I should have and kept on making that mistake,” he said. “With wrestlers, we’re stubborn and it’s a common theme of coming back too early.”

The injury—Valencia’s most serious to date in his burgeoning career—was a true learning experience and so impactful that he’s decided to write his Stanford application essay on the subject. While Valencia might have been sidelined for a bit, he used the “down” time to get stronger in the weight room and put on some size.

“I wouldn’t trade the experience [knowing what I know now],” he said. “It basically changed the way I lived for almost a year. It sucked and took me from the thing I loved to do, but I learned a lot. I was still training and focused a lot on my mat game, which was really important. It was also important for my mental state to go through a little adversity which is always good.”

Valencia also took on some hobbies and passions that he normally wouldn’t have been able to do.

“I did some biking, some excursions, just kind of being a kid a little bit which I probably haven’t experienced ever in my life,” he said. “I think it was a good break from the sport. Obviously the whole time I was craving to come back and making my presence that much stronger in the sport.”

Back to full strength, Valencia has some unfinished business left this high school season. Currently ranked No. 10 in the class of 2024 High School Big Board FloWrestling national rankings and the top-rated recruit in California, Valencia lost in the semifinals in the CIF State Championships last year, a time in which he was still nursing the hamstring injury.

So, even though Valencia has junior world wrestling and judo championships and national titles to his credit, State has eluded him. Perhaps not for long.

“You can’t go to the national and world senior level without picking up that state championship, so it’s definitely important and on my list,” he said. “It’s another step and I’m coming hard this year like a bat out of hell.”

Valencia realized a dream with his commitment to Stanford. He chose the prestigious university for its academics, the opportunity to help build the wrestling program into a potential NCAA power, and for its Regional Training Center (RTC), which is recognized as a USA Wrestling Regional Training Center site. The latter is an ideal spot for Valencia to train post-college in his quest to make an Olympic team and subsequently to win World and Olympic medals.

Wrestling-wise, Stanford isn’t in the class of programs such as Penn State, Ohio State and Iowa, which have all won NCAA titles in the last 10 years. But that was part of the allure for Valencia, who wants to help lead the Cardinal into that upper echelon.

Valencia hopes his Reno TOC showing makes an impression with other top high school recruits who are considering their college choices.

“I’m hoping kids from across the country will see Stanford is recruiting top level guys and that they’ll want to be a part of what Stanford is building,” Valencia said.

If Valencia didn’t have a goal to become an Olympic champion, he would spend a lot more time mountain biking and hunting … rattlesnakes. Yes, Valencia said he went on several 50-mile bike rides and caught rattlesnakes in Henry Coe State Park during one of the periods where he couldn’t do any wrestling.

In a March 28, 2022 Twitter post, Valencia uploaded two photos—a dead rattlesnake and then the end result of it being cooked—which he said combined his passions for herpetology and cooking.

A couple of days after winning Reno TOC, Valencia was already back in match mode.

“There’s no time to waste,” he said. “I had a great weekend but I have to get right back at it and keep that momentum going.”