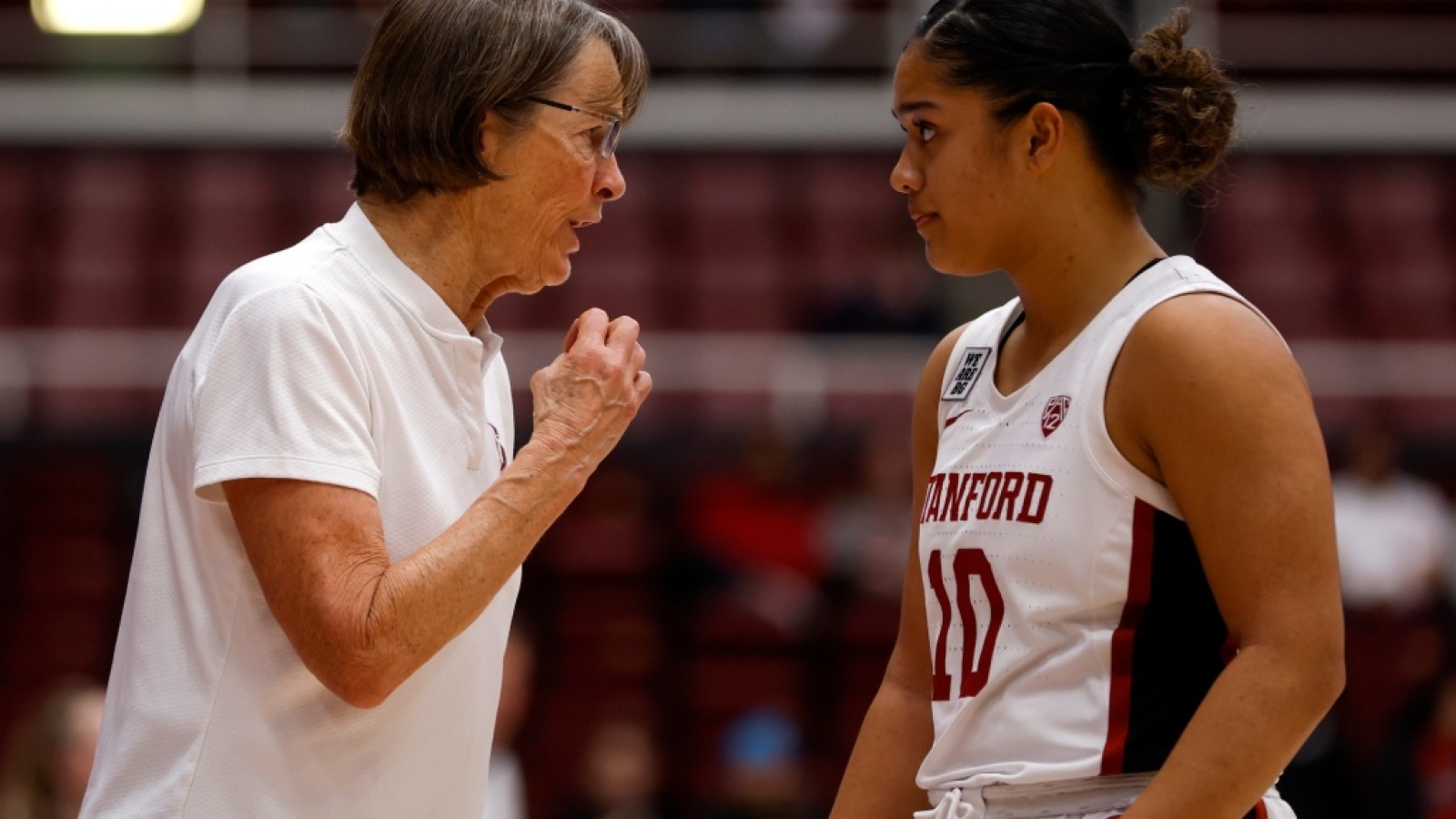 Of all the ways to dissect the Pac-12 women’s basketball race, which begins in earnest this week, the identity of the eventual champion is among those least in dispute.

The Hotline puts the chance of someone blocking Stanford from a third consecutive conference title at 10 percent, and that might be generous.

Whether the Cardinal can extend its 35-game conference winning streak through another full regular season is the more interesting debate, along with questions of who will finish second and whether one of the seven unranked Pac-12 teams can finish in the top five.

Odds favor Stanford tripping up at least once in 18 games, particularly since seven are against UCLA, Utah, Oregon and Arizona — each of which carries a top-20 ranking. We’ll put those chances at 55 percent while owning up to being wrong last season on this very topic.

As for the eventual Pac-12 runner-up, we like Utah with its 92.5-point scoring average to prevail. But don’t bet the house on our 51-percent confidence in that pick.

But the WNIT could be stuffed with Pac-12 teams since the seven currently unranked are between three and eight games over .500 in non-conference play.

Here are Hotline predictions for the Pac-12 season:

Coach: Tara VanDerveer (36th season)NET ranking: No. 3 (through Dec. 23).Outlook: Freshman guard Talana Lepolo is No. 21 nationally in assists and has an assist-to-turnover ratio of 2.16, answering the biggest question coming into the season given the losses of the Hull sisters and Anna Wilson. Yes, Cameron Brink still gets into foul trouble, but she’s better playing through it and is the favorite for Pac-12 Player of the Year over teammate Haley Jones at this point. The depth is impressive, and 6-foot-7 freshman Lauren Betts is developing into what could be a postseason difference-maker.

Coach: Lynne Roberts (8th season)NET ranking: No. 6Outlook: Of the six undefeated teams in Division I, Utah is the only Pac-12 representative and has tied the best start in school history ahead of Friday’s game at Washington State. The Utes’ No. 11 AP ranking this week also is tied for their highest ever (last time: January ’98). Alissa Pili was good when healthy during her USC career, and the 6-foot-2 forward is even better in Utah’s system, averaging 20.1 points and 6.1 rebounds. Mississippi is the only team to hold the Utes under 70 to date.

Coach: Cori Close (12th season)NET ranking: No. 25Outlook: Remember that the 10th-ranked Bruins’ only loss, as is the case for Stanford, came against defending national champion and unanimous No. 1 South Carolina. But they also won by a modest three points at USC on Dec. 15 and periodically must lean heavily on defense to prevail. Charisma Osborne (18.1 points per game/6.5 rebounds per game) is another Player of the Year contender, and Kiki Rice is vying for Freshman of the Year. Ten players are averaging double-figure minutes, a big change from an injury-plagued 2021-22.

Coach: Kelly Graves (9th season)NET ranking: No. 10Outlook: Oregon’s lopsided loss to No. 3 Ohio State before Christmas took some luster off the preceding day’s 85-78 win over Arkansas. “We’ve got to get better and got to get organized defensively,” coach Kelly Graves said. Grace VanSlooten has scored 26 or more in three of the last four games and is the current Pac-12 Player and Freshman of the Week. The Ducks play Stanford and Utah only once in the regular season.

Coach: Adia Barnes (7th season)NET ranking: No. 29Outlook: As the final two teams to open Pac-12 play, Arizona and Arizona State face three games in five days this week, including against each other and at Stanford. The No. 18-ranked Wildcats need to go at least 2-1 in that stretch to keep from falling behind their stiff upper-level competition. Cate Reese is beginning to assert herself, with four straight double-digit scoring games that include a combined 39 rebounds.

Coach: Kamie Ethridge (5th season)NET ranking: No. 50Outlook: There appear to be four viable candidates for sixth place in the Pac-12. We’re going with Washington State primarily based on a veteran starting lineup that’s made consecutive NCAA Tournament appearances. But the Cougars are short on depth and would greatly suffer from the loss of any of their top five. Charlisse Leger-Walker (21.1 points per game) is central to WSU securing a school-record, third consecutive NCAA berth.

Coach: JR Payne (7th season)NET ranking: No. 35Outlook: A strong finish to the non-conference season, with a 71-48 win at Marquette, gives more credence to the Buffs’ NET ranking — the sixth highest in the Pac-12. “That’s the best basketball we’ve played in a while,” coach JR Payne said. A tighter rotation worked in that game, and Payne might lean more heavily on her starters going forward. ESPN’s  Bracketology currently has Colorado among the final four teams making the NCAA Tournament field.

Coach: Scott Rueck (13th season)NET ranking: No. 62Outlook: A 32-point loss to ninth-ranked LSU (12-0) leaves the Beavers with a bad taste going into full Pac-12 play, a time when they typically improve. McDonald’s All-American Timea Gardiner, a 6-foot-3 forward, has yet to play, and there still is no clarity on her availability. All of Oregon State’s losses are to NET/RPI Quadrant I (Iowa, Duke, Oregon, LSU), which could skew what the Beavers are capable of overall. Raegan Beers is among the Pac-12’s top freshmen.

Coach: Lindsay Gottlieb (2nd season)NET ranking: No. 44Outlook: The Trojans lost their only two games against Power Five opponents (UCLA and Texas) but played the Bruins close and look the part of a middle-of-the-Pac challenger. Rayah Marshall is on a three-game double-double streak and averaging 10.3 rebounds per game (No. 19 nationally). The Trojans are another team receiving postseason bubble recognition in ESPN’s bracket projections.

Coach: Natasha Adair (1st season)NET ranking: No. 120Outlook: ASU is the only Pac-12 team with a three-game losing streak in non-conference action, a skid due partly to injuries that reduced the depth to seven scholarship players. Journey Thompson returned, and Meg Newman had her best game (12 points and 18 rebounds) against Prairie View to end the streak and create some momentum for Pac-12 play. Adair is the only new coach in the conference this season, coming from Delaware after consecutive postseason (WNIT/NCAA) appearances. Tyi Skinner, who transferred from Delaware, is No. 15 nationally in scoring (20.6 points per game).

Coach: Tina Langley (2nd season)NET ranking: No. 115Outlook: The Huskies offered a glimpse of their full potential in an 82-66 win over Washington State on Dec. 11 but sustaining that offensively remains a question. They average 67 points while scoring fewer than 60 in four games. Dalayah Daniels is the only double-figure scorer (11.8 points per game), and the 6-foot-4 Cal transfer will need the kind of help she received against WSU, when five players were in double figures with Lauren Schwartz scoring 21.

Coach: Charmin Smith (4th season)NET ranking: No. 78Outlook: The Bears’ strength-of-schedule (No. 240, one place ahead of Washington) is last in the Pac-12, so it’s hard to put great faith in the nine wins. That said, Cal had the toughest Pac-12 opener, losing 90-69 to Stanford, which is capable of repeatedly winning by that margin. Jayda Curry is the returning Pac-12 scoring leader, although her average is down from 18.6 to 15.8 points per game. Utah transfer guard Kemery Martin has made a difference for a team that needs collective rebounding.

*** Pac-12 Hotline is not endorsed or sponsored by the Pac-12 Conference, and the views expressed herein do not necessarily reflect the views of the Conference.