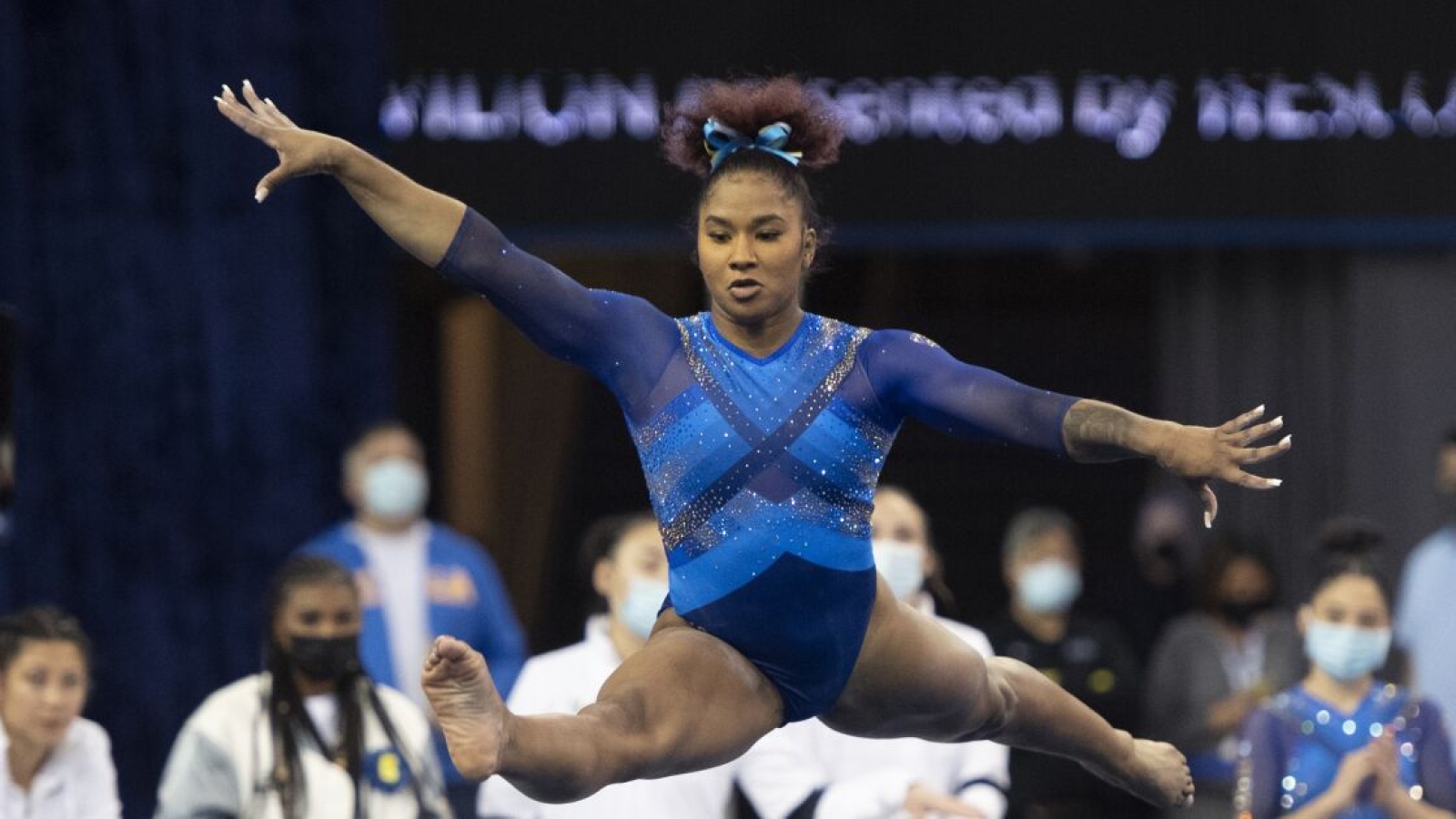 All it took was one event for the gymnastics world to know.

Mired in its longest nationals drought in program history, the No. 10 Bruins announced their return to the national conversation with their best season-opening score since 2005 on Saturday in the finale of the Super 16, a two-day, four-session gymnastics extravaganza in Las Vegas.

No. 1 Oklahoma, the defending national champions who have four of the last six national titles, delivered a wire-to-wire victory and finished with 197.925. No. 4 Michigan, which won the 2021 NCAA title, charged from fourth place in the final rotation to take second with 197.4. Led by reigning Olympic all-around champion Suni Lee, No. 5 Auburn finished third with 197.35.

“Our goal today was to just come out here, get our feet wet, be connected and be in it together and I felt like they just came out and did exactly that,” McDonald told reporters. “I couldn’t be more proud of how they competed, how they connected with one another and how they finished tonight. It was a great start to our season.”

The Bruins, who have missed the national championships in back-to-back years for the first time in history, entered the final rotation in second, but stumbled on balance beam. Freshman Emily Lee, a three-time U.S. national team member who was competing for the first time since tearing her Achilles in 2021, led off with a 9.3, forcing the Bruins to count an underwhelming 9.65 from junior Chae Campbell.

But with a 9.9 from Emma Malabuyo in the anchor position, UCLA’s 49-point total on the event still secured its best regular-season road score since 2020. Although it’s just the season opener, the key result is important for postseason qualifying rankings that use a team’s top six scores from the regular season, three of which must come on the road.

Sophomore Jordan Chiles tied for second in the all-around with a 39.65 behind Suni Lee, whose perfect 10 on beam propelled her to a 39.75. Freshman Selena Harris starred in her collegiate debut with three scores of 9.9 and an all-around total of 39.5 in her hometown in front of her family, friends and former club teammates.

“I feel so overwhelmed,” Harris told reporters. “I cried. I lost my voice in the process, but I’m just so happy that I was surrounded by everyone who loves me and was part of my journey to get here.”

Marking the beginning of a new era at the celebrated program, McDonald’s immediate influence was most evident on bars, where the Bruins competed in the third rotation. From its lowest-scoring event last year, UCLA eclipsed its season-best bars score from last season with a 49.5 on Saturday. Chiles and Margzetta Frazier scored 9.975 and 9.95, respectively, to finish the rotation.

UCLA opened the competition on floor, showing the same energy that propelled the program to national prominence and internet fame. The Bruins had three scores of 9.9 or better, led by a 9.95 from Campbell in the final position.

But just viral floor routines of recent seasons haven’t been enough to keep the UCLA in national championship contention. The Bruins showed they’re ready to return by backing up a 49.4-point total on floor with a 49.375 on vault to stay in second place, only one-tenth behind Oklahoma before the Sooners ran away with the meet.

“I’m just really excited about this team,” Malabuyo told reporters. “Our preparation, we’ve been working so hard in the gym and it really paid off today. We didn’t focus on the scores or anything else, we just focused on our routines and our Bruin Bubble.”