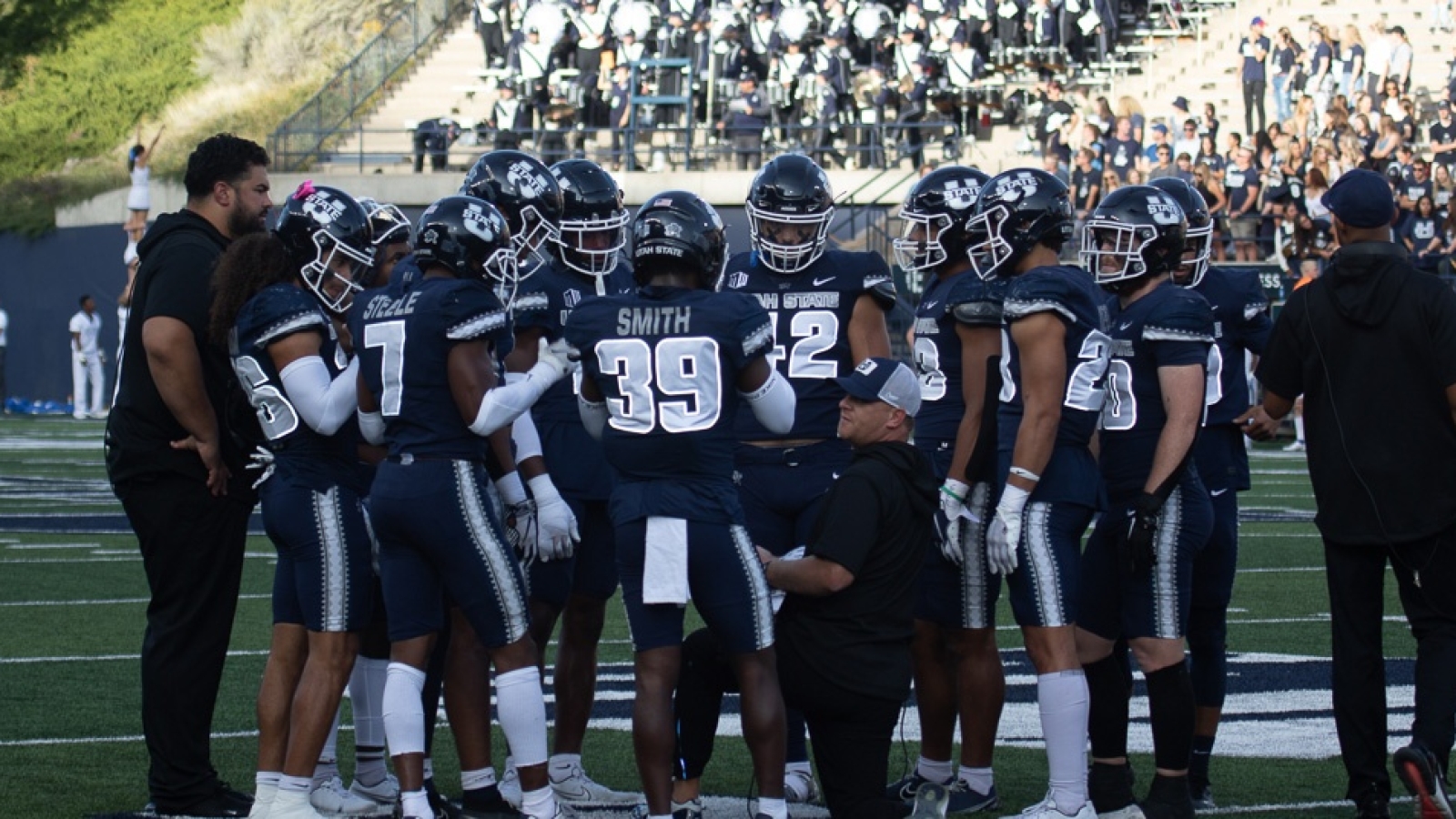 The class is made up of 11 high school student-athletes, 10 junior college transfers and two four-year transfers. By state, nine of the signees hail from Utah; six from California; two from Florida and Georgia; and one each from Alabama, Hawaii, Louisiana and Texas.

Perhaps the most notable recruiting win for the Aggies is offensive lineman Taliafi Taala from Alta High School in Sandy. Taala is rated as a four-star recruit by ESPN and the no. 6 prospect in Utah, according to 247Sports.com. Power Five schools Michigan, Michigan State, USC, Utah, BYU, Arizona, Arizona State and Oregon State all offered Taala, but he chose to come to USU.

“Excited to be a Utah State Aggie!!” Taala tweeted on Wednesday. “I’m immensely grateful for my parents, family and coaches for the continued love and support.”

Offensive lineman Jr Sia from Mountain Ridge High School in Herriman is another solid in-state grab for the Aggies. He is ranked as the no. 11 recruit in Utah and passed up on Power Five offers from Nebraska, Utah and Virginia to be an Aggie, according to 247Sports.com.

Locally, Anderson convinced wide receiver Jackson Olsen and defensive tackle Justice Ena to stay in Cache Valley. Olsen, a three-star recruit, played at Ridgeline High School. Despite an injury-shortened senior season, Olsen is ranked as the 22nd-best prospect out of Utah by 247Sports.com. During his junior season, Olsen earned Utah Class 4A first-team all-state honors while boosting the Riverhawks to an undefeated season and state championship.

“Beyond blessed,” Olsen tweeted on Wednesday.

Ena, the son of former Utah State inside linebackers coach and current San Diego State defensive line coach Justin Ena, hails from Sky View High School in Smithfield. During his high school career, Ena helped the Bobcats to their first-ever state championship in 2019 while playing on both sides of the ball as a defensive tackle and offensive lineman. Ena was ranked as the 35th-best recruit in Utah by 247Sports.com.

Three-star quarterback McCae Hillstead is another solid pickup from the Beehive State. Hillstead, the no. 15 prospect from Utah and the 60th-best quarterback recruit in the nation, passed on offers from Washington State and FIU to join the Aggies, according to 247Sports.com. Hillstead was a three-year starter for the Falcons and passed for 6,898 yards, 73 touchdowns and 24 interceptions while rushing for 1,791 yards and 35 touchdowns on 327 carries in his high school career. In his senior season, Hillstead earned Utah Class 6A second-team all-state honors despite missing six games due to injury.

Safety Kadiyon Sweat, another three-star signee that hails from Lehi, was named the Utah Valley Player of the Year and Utah Class 5A Region 8 MVP his senior season. During his time at Lehi High School, Sweat led the Pioneers to back-to-back 5A state titles while amassing career totals of 217 tackles, 29 pass breakups and 26 interceptions — including four pick-sixes.

Mataele played in 35 games and had 11 starts in five seasons as a Ute. His career totals include 43 tackles, 2.5 tackles for loss, six pass breakups and one interception  — which came against No. 10 Oregon in the 2021 Pac-12 Championship game. Coming out of Santa Margarita High School, Mataele was ranked a three-star recruit.

From the junior college level, the Aggies grabbed junior wide receiver Micah Davis from Iowa Western Community College who originally played two seasons for Air Force in 2020 and 2021. Davis helped Iowa Western capture an NJCAA National Championship while leading the nation in punt returns with 326 yards on 29 returns. On the season, Davis totaled 289 yards and two touchdowns on 33 receptions.

“Playmaker!” Tony Koehling, Iowa Western’s offensive coordinator, tweeted on Wednesday. “They got better today with this one! Good luck and go do big things!”

Kahanu Davis, another junior wide receiver transfer, will join the Aggies from Southwestern College. There, Davis caught 25 passes for 498 yards and five touchdowns in 2022. He had three 100-yard receiving games and even filled in as quarterback for Southwestern during his freshman season for four games.

Junior defensive end Cian Slone seems to be an exciting pickup for Utah State on defense. Slone was named California’s Defensive MVP and a California Community College Football Coaches Association All-American. In 2022, Slone tallied 84 tackles, including 12 sacks and 22 tackles for loss, during his sophomore season at American River College.

The Aggies will wrap up the 2022 season with the First Responder Bowl in Dallas against Memphis on Tuesday, Dec. 27 at 1:15 p.m. MT. The game will be broadcast on Aggie Radio 92.3 FM.

Featured image by Paige Johnson from the Air Force game.