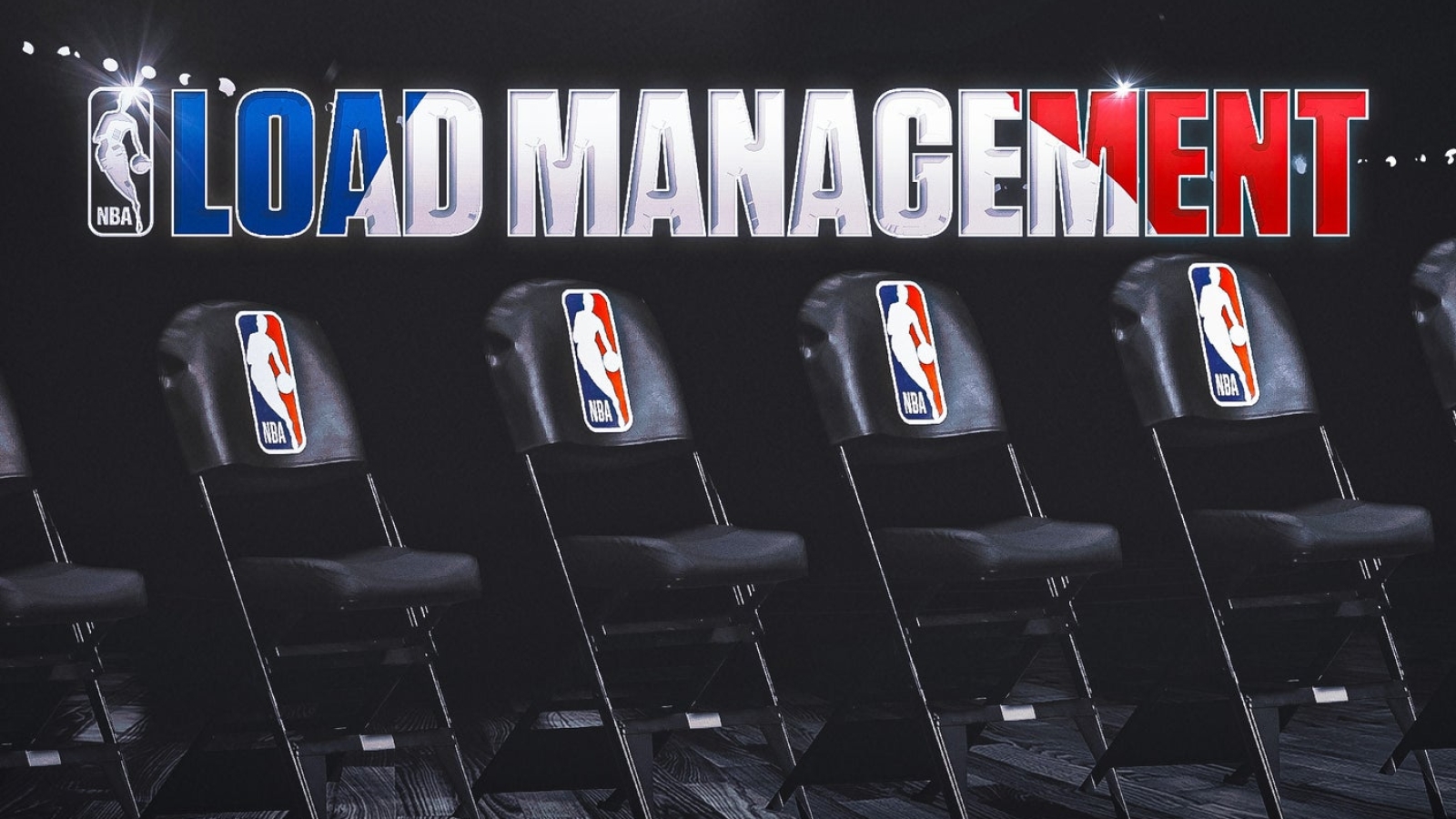 It might just be the most despised phrase in the NBA today: load management.

It’s certainly the most misunderstood.

It is a catch-all phrase to describe when an otherwise healthy player sits out a game, a player coming back from injury is limited in how much he can play, or it is announced at the start of a season that certain players will not play on back-to-back nights.

All in the name of load management.

I held it in low regard myself. But there were always two questions that nagged at me: Why doesn’t it seem to be working? And, if it’s not working, why are NBA teams still employing it?

The answer — based on my conversations with players who are either among today’s rare iron men or, have played both in the bump-and-grind era and today’s no-touch track meet — is this: Contrary to popular belief, today’s game is more physically demanding than ever.

“That’s a fair assessment,” says Utah Jazz point guard Mike Conley, a 15-year vet who spent his first 12 seasons as part of the “Grit ‘n’ Grind” Memphis Grizzlies, a team that seemed to have skipped the time continuum from the 1990s, when most squads were content to run over rather than around opponents.

“I was part of the physical era, where you could hand-check and grind, post up and all that,” Conley said, smiling at the memory. “We were a physical team. It’s who we were. That was taxing in a whole other way. You played through injuries, but it was more bumps and bruises because you were being physically assaulted.

“Now it’s like, imagine running as fast as you can for 48 minutes and having to do that every night. There are more possessions, more opportunities to get these non-contact injuries. Guys are having more calf strains, more hamstrings and stuff like that. We weren’t getting those as much (before).”

Mike Conley, who was part of the Grizzlies’ rugged “Grit ‘n’ Grind” teams, says the pace of today’s game is like “running as fast as you can for 48 minutes.” (Photo by Getty Images)

Injuries, overall, in the NBA have been on the rise, according to a study released last February, despite advances in sports medicine, nutrition, sleep patterns, training and, yes, load management. Which would suggest that all the advances have not been able to compensate for the game’s greater physical demands.

That would not surprise Warriors center Kevon Looney, one of five players to play in all 82 games last season. This is his eighth season, and even over that relatively short span, he can attest to how the game has become far more physically dynamic.

Looney’s first season was the last for Tim Duncan, who helped popularize — if not introduce — the concept of load management. San Antonio Spurs head coach Gregg Popovich milked a fifth championship out of a 37-year-old Duncan and 36-year-old Manu Ginobili by carefully managing their minutes over the course of the 2013-14 season.

The strategy was inspired by Duncan and Ginobili’s advanced age and injury history, not analytics, but that was also the first season the NBA installed cameras in the rafters of every arena to track and measure the movement of players during the course of a game, including the distances they ran and their average speed on offense and defense.

There’s little doubt players are running more and at higher speeds today than ever before. In the first season the data was gathered, 14 players ran an average of 2.5 miles or more per game. This year so far: 40 are at or above that mark.

Teams are also able to collect biometric data on players, everything from their reaction time to oxygen consumption and lactic acid levels, which is used by the medical staffs to convince players to take a night off.

“You have to take care of your body in different ways in order to keep this pace up that we have going now, and they share a lot of information with you,” said Portland Trail Blazers forward Jerami Grant, now in his ninth season. “They show you how your body is getting worn down. You can see how many steps you are taking on the court. You can see your decrease in play and what might be causing it. Like, you might miss a shot because your legs are tired. They track everything.”

Some players are more receptive to that information than others.

“I still haven’t adjusted to it,” Conley said. “I want to play every time I can. I love to hoop. That’s my favorite part. If I can skip a practice or something, I’ll say, ‘Yeah, OK.’ Games are the fun part. It takes a lot to put your pride and ego aside and say, ‘Hey, these guys know what they’re doing and are paid well to protect us from ourselves.’”

Warriors forward Draymond Green, in his 11th season, is now an advocate of the science. He started out as a suit-up-every-night guy, missing a grand total of seven regular-season games through his first four seasons and playing all 82 his second year.

But the beat down of five consecutive runs to the Finals, mixed with the information provided by second-year player health and performance director David Taylor that led to a sixth NBA Finals appearance and fourth championship, was enough to change Green’s mind on the topic of rest.

“Why do we have science, why do we have technology if we’re going to ignore it?” Green asked. “We have the best science guy in the game in Dave Taylor. Why would we ignore him? There are guys who played in this league who tried to play all 82 games who can’t walk anymore. So, toughness is what you make of it.

“It’s a totally different type of game today. We’re running up and down the court 70 more times a game than they used to. You can’t compare that. At the same token, we could say, ‘Oh, well, before, guys were too slow, and they couldn’t keep up.’ That’s ridiculous, too, right? It’s a different game.”

Green and Conley embody the shift in player mindsets. But the bigger shift might be in the team approach.

Chicago Bulls icon Michael Jordan played all 82 games nine times in his 15-year career, including his very last season, in which he turned 40 before the end of it. A broken foot in the third game of his second season was among the six shortened ones.

In today’s game, the lottery-bound Bulls would’ve ruled him out for the season — the way the 76ers did when rookie Ben Simmons broke his foot in training camp — to protect their franchise cornerstone from re-injury and improve their chances of landing the No. 1 pick.

If Bulls’ management tried to dissuade Jordan from coming back, they didn’t do a very good job. He returned in March to play the final 14 regular-season games just to drag Chicago into the playoffs and face the top-seeded Boston Celtics — against whom Jordan played 43, 53 and 39 minutes futilely, attempting to avoid a sweep.

Michael Jordan returned from a broken foot in his second season to lead the Bulls into the playoffs. (Photo by Getty Images)

Conversely, LeBron James is in his 20th season. Only once has he played in all 82 games, but he insists he starts every season with the desire to play as much as he can. The tracking data suggests he is an expert at load-managing even when he is in games, minimizing how much ground he covers, particularly off the ball. But all of that has allowed him to continue playing at a supremely high level, averaging 36 minutes a game at age 38.

“I think there are a lot of guys today, maybe they feel they have more information that they’re doing the right thing based on this whole new analytical thing,” Conley said. “When I first came in we didn’t have all that. You didn’t have someone in your ear constantly telling you ‘You’re the man, you don’t need to play tonight,’ or, ‘You’re the man, we need to rest you to get ready for the playoffs.’ It was, ‘I need to play every night. They pay me all this money, I’ve got to go out there and perform.’ So it’s a different switch.

“I think the team is doing the best they can to get you out there to play. We do get hurt. We do have an ankle sprain, where the average person might miss two weeks, we’re back in two, three days. Some guys are truthfully hurt and trying to push through and if there’s a gray area, and you ask the team, ‘Do I go or not?’ the team is going to tell you not to go. They’re going to err more on the side of caution today than 15 years ago.”

All of which makes Looney a throwback. After playing all 82 games last season and 22 playoff games, he has every intention of playing all 82 this season again — and hopefully, however many postseason games it takes to win another title. But he knows he will have to persuade Taylor and the rest of the Warriors’ medical staff to let him.

“I have those conversations all the time,” he said. “I’ve told them a few times, ‘No, I feel great, I’m good,’ but they always say, ‘If you feel anything, if you feel like you need a day, take one.’ Or if they see my numbers going down on the court, they’ll say, ‘You might need to take one.’ Everybody thinks the players are trying to load-manage, but it’s more a team thing, from the training staff. They want guys to be ready, and it’s a long season, so they don’t want guys to get hurt. I want to play every game.”

In other words, count Looney among those who are just fine managing their own load.

Ric Bucher is an NBA writer for FOX Sports. He previously wrote for Bleacher Report, ESPN The Magazine and The Washington Post and has written two books, “Rebound,” on NBA forward Brian Grant’s battle with young onset Parkinson’s, and “Yao: A Life In Two Worlds.” He also has a daily podcast, “On The Ball with Ric Bucher.” Follow him on Twitter @RicBucher.

Get more from National Basketball Association Follow your favorites to get information about games, news and more